SAGE GIVE A HEROES’ WELCOME TO INVICTUS GAMES COMPETITORS 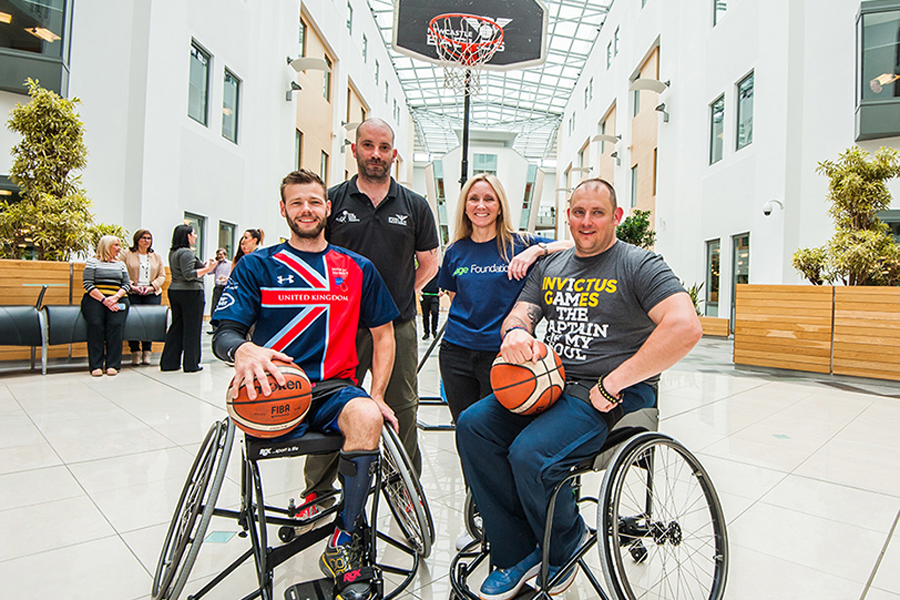 The region’s Invictus Games heroes have been welcomed back onto home turf at a celebration event hosted by North East-based market leading technology firm, Sage.

Michael Hutchinson and Gareth Golightly, from Sunderland and Longbenton are part of Newcastle Eagles Wheelchair Basketball team and represented the UK at the Invictus Games in Orlando last week, founded by Prince Harry. They arrived back in the UK on Sunday and one of the first places they visited was Sage’s Headquarters, the market leader for integrated accounting, payroll and payment systems, to meet and greet Sage employees and say thank you for the support they gave at the Games.

Newcastle-based Sage arranged the event so colleagues could meet some of the UK’s silver-medal winning Invictus Games basketball team, chat to them about their experiences and even shoot some hoops with the competitors. Sage, through its corporate philanthropy initiative, the Sage Foundation, recently announced it has entered into a multi-year partnership with the Invictus Games Foundation. The partnership involves Sage supporting the starting with the Orlando event in May and beyond.

Leigh Thompson, Sage Foundation Programme Manager, said: ‘It’s a huge honour to be an ongoing partner of the Invictus Games and it’s amazing to have people from the North East represent the UK at the Games. Our homecoming event is another way of thanking the competitors who were out there and to extend the support we provide to the local communities through our Foundation. My colleagues here loved seeing the basketball players and some even tried out playing basketball in the wheelchairs too, which they all found extremely hard.

“We will also extend its mentoring and work placement programme for former military service personnel to all competitors looking to establish small businesses and learn business skills as they consider their careers beyond competitive sport.

“Supporting the country’s entrepreneurs is our absolute passion so we’re delighted to open up our mentoring and volunteering programme to any Invictus Games athlete that is looking to set up their own business, including the guys here today.”

The Newcastle Eagles Wheelchair Basketball team work in conjunction with The Percy Hedley Foundation’s Sports Academy, which runs a wheelchair basketball team and club. Although Hedley’s Sport is primarily involved in getting disabled people into sport the charity is equally as involved in promoting the power of sport as a tool for rehabilitation, both physically and mentally.

Adam Parry, Sports Development Manager at Hedley’s Sport, said: “We are very proud of the guys taking part in the Invictus Games and for them to have been selected is a testament to their hard work.

“At Hedleys Sport we believe very strongly in the use of sport as a rehabilitation tool and these guys are perfect examples of that. We were delighted to see them both return from Orlando with medals.”