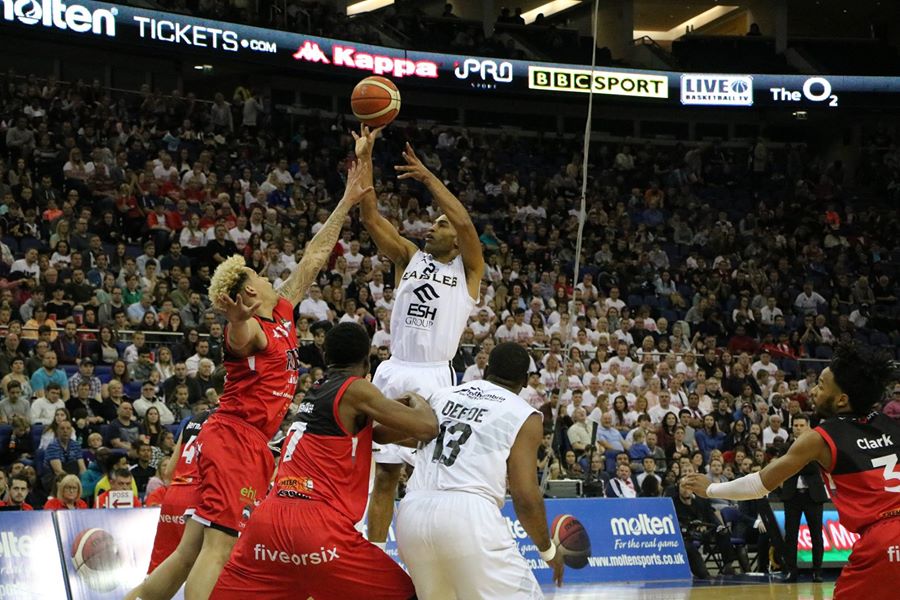 Leicester Riders completed a memorable treble in dominant fashion after beating Esh Group Eagles Newcastle 84-63 in the Play-Off Final in front of 14,500 at The O2.

Rob Paternostro’s side raced out of the blocks and never looked back as they added the end-of-season crown to their Trophy and league titles won earlier in the year.

Pierre Hampton recorded a first half double-double before finishing with 14 points and 14 rebounds to take the MVP award with Andy Thomson top scoring with 18 points off the bench.

Shane Walker and Brandon Clark opened the game with back-to-back triples before Hampton scored the next seven in a 13-4 start. The lead was further stretched with a 10-0 run and led 29-11 at the end of the first.

Riders’ advantage hit 25 points early in the second with a complete performance at both ends of the floor. The North-East side offered a brief fightback and found themselves down 47-27 at the half.

There was no let up when play resumed with Leicester staying in control with a 9-0 run and Tyler Bernadini capped the third with another 3-pointer to make it 72-44.

The Riders pushed the lead beyond the 30-point mark in the fourth and the celebrations started early as the treble was secured.

League MVP, Rahmon Fletcher finished with 16 points for the Eagles as they were unable to add to their Cup title.

Lasker added, “We have been in this position a number of times at Eagles, but this was their time.”

In the post-game press conference, our Player/Coach Fab Flournoy MBE told the gathered media “You have to give them a lot of credit for the way they played this game and throughout the season.”

Fab conceded that “The occasion got to us with some of the new guys playing on this stage for the first time” before adding “We could have played a better game and we will have to learn from this.”