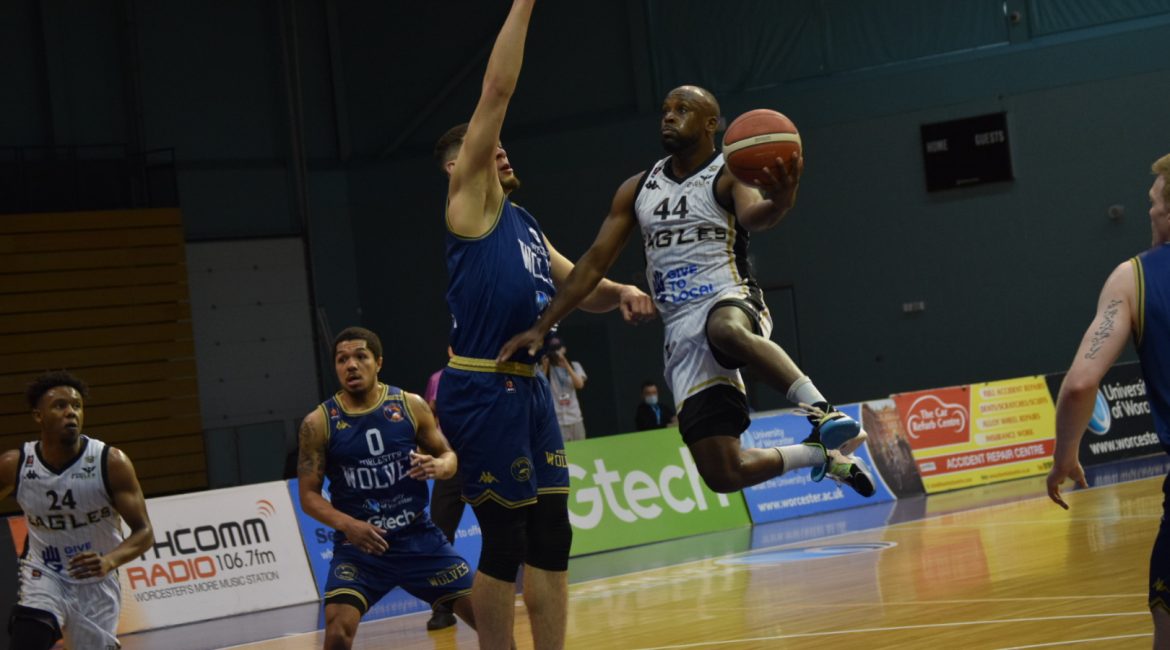 The Newcastle Eagles inconsistent form once again proved their nemesis on the road in Worcester as they slipped to another road loss to the hungry Wolves.

Newcastle do still have two regular season games left but it’s looking likely that their final finishing position will be fourth after this latest loss. Coach Ian Macleod once again was without veteran forward Darius Defoe and his absence certainly makes the Eagles defence look a bit shaky at times.

Not that Newcastle could really bemoan the lack of Defoe in their roster as the home side were short of two of their American stars with power forward Mike Parks joining influential guard Brandon Anderson on the side-lines.

The Eagles started well after conceding the first two points of the game they answered with eight without reply to take an early six-point lead. However, the home side with Lamarr Kimble and Elijah Burns prominent hit back with an 11 – 2 run to retake the lead.

Coach Ian Macleod went to his bench early with Rex Pflueger, Drew Lasker and Shore Adenekan all giving him valuable minutes. As the last few minutes of the first ticked down there was little between the sides although with Louis Sayers hitting three triples in the quarter and 11 personal in all just edged the period 26 – 24.

The second saw Newcastle once again make the more positive started as Rahmon Fletcher began to find his rhythm and powered through for his side. With Justin Gordon scoring from all over the court the visitors managed on a couple of occasions to stretch their lead to six points.

Jordan Williams was proving a handful inside for Newcastle but despite him supplying his teammates with good service, Wolves couldn’t take advantage of it and the Eagles held strong to reach the half-time locker room leading 46 – 40.

The only things of concern at that point may well have been a tough foul count that saw the home side not have a call against them until a full six minutes into the second period. Newcastle meanwhile had both Edwards, Adenekan and Maxwell on two fouls as the second half opened.

However, it was Williams for the home side that picked up his third on the first play of the second half with Maxwell’s two from the charity stripe giving the visitors their biggest lead of the game on 48–40. But with Williams having to sit Newcastle looked to take advantage.

They took it in the end by eight to take a narrow two-point lead into the final ten minutes. The Eagles made the first move. Sayers who hadn’t scored since half-time netted a three-pointer and then Fletcher another one and Newcastle led 73 – 70.

But Wolves wouldn’t go away and they produced an impressive display of outside shooting to turn the game around and when Kimble nailed back-to-back triples they suddenly led by nine points and Macleod needed a time-out.

It did inspire his side as they cut the gap to three points but that was as close as they got. With the seconds ticking down Newcastle were forced into fouling to try and stop the clock and give themselves a chance but Worcester held their nerve from the free-throw line to seal the win.

The Eagles now have less than 48 hours to turn themselves around before they face Surrey Scorchers on Sunday at the Vertu Motors Arena.