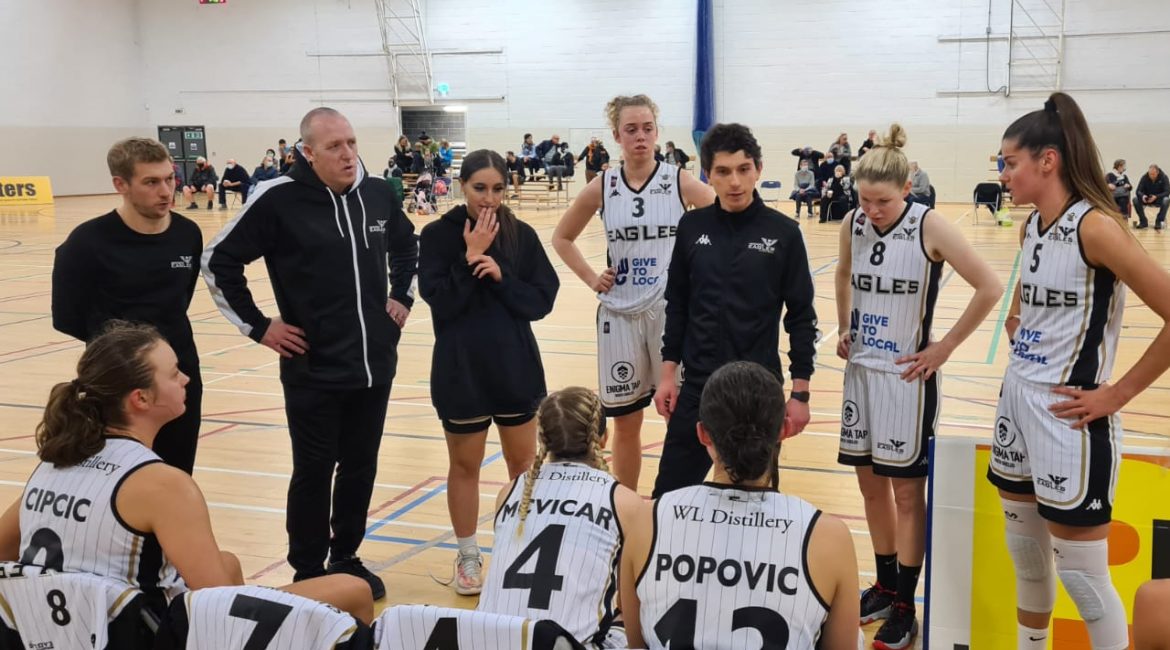 The gulf in class between the WBBL’s leading teams and the chasing pack was brutally exposed in Sheffield last night as the homecourt Hatters cruised to a 20-point win against Newcastle Eagles.

The visitors, missing head coach Chris Bunten and GB 3×3 star Abby Lowe, endured a slow start and a nightmare finish as Vanessa Ellis’s title challengers moved to 8-0 in the league.

And the women in black head to expansion franchise Gloucester City Queens next weekend needing a bounceback win to stay in the top six picture.

Newcastle travelled to South Yorkshire full of confidence after securing a place in next month’s WBBL Cup final courtesy of a fighting win against Leicester the previous weekend.

Prior to tip-off, in-form Dora Cipcic insisted a showdown with Sheffield was just what the doctor ordered for an Eagles roster determined to mix it with the WBBL’s best.

But the visitors’ bubble was burst within the opening minutes of a brutal first period as the hotshot hosts tore into their northern rivals.

But it was Ariona Gill, coming off the bench, who had Newcastle on the back foot early on as she added five rebounds to her five first period points in just five minutes.

A stunning 16-0 tear either side of the quarter break fired Ellis’s side into a 36-13 lead.

And Eagles’ assistant coach Luke Orwin was forced to call a hurried time out less than three minutes into the second period in a bid to stop the rot.

But after a brace of Chloe Gaynor free throws snapped the Hatters’ hot streak it was back to business as usual for the Steel City side.

And Sheffield cruised towards a 51-30 lead at the half with nine different scorers finding the net for the rampant hosts.

Nonplussed Newcastle had conceded 16 points from eight turnovers and been unable to prevent the Hatters’ bench from helping themselves to 16 first half points.

Only Gaynor — with 10 points and six boards — had offered any semblance of resistance as the Hatters sought to preserve their 100 per cent Championship record.

And it was back to the drawing board for the Bunten-less Eagles as the downcast visitors headed towards the locker room following a chastening first 20 minutes.

Worryingly, talismanic guard Maddy McVicar had managed just two points in 10 first half minutes as she continued her tentative comeback from injury.

Just as concerning was the lack of intensity across the court as Newcastle looked a shadow of the battling team that dashed Riders’ dream of a cup final appearance.

Maybe McVicar felt she had a point to prove after the break but it was the busy American who sparked a bullish comeback in the third quarter.

And despite a disastrous start to the game, the Eagles somehow rallied to take the period 27-13 and reduce the deficit to just seven points with 10 minutes to play.

Suddenly Sheffield looked shaky in the face of determined defence and smart finishing with Cipcic making the difference for the second game running.

The all-action guard sank two from two from the bonus stripe to move to double figures as Newcastle reeled off 10 unanswered points.

And had McVicar not missed two late buckets in the dying stages of a thrilling third quarter then the visitors could have moved to within a score of the homecourt Hatters.

The quarter break couldn’t come soon enough for faltering Sheffield but the hosts hit the fourth period firing on all cylinders.

Helen Naylor moved to 25 personal as Ellis’s side regained control and even Gaynor’s double double of 18 points and 11 rebounds couldn’t prevent a sobering loss.