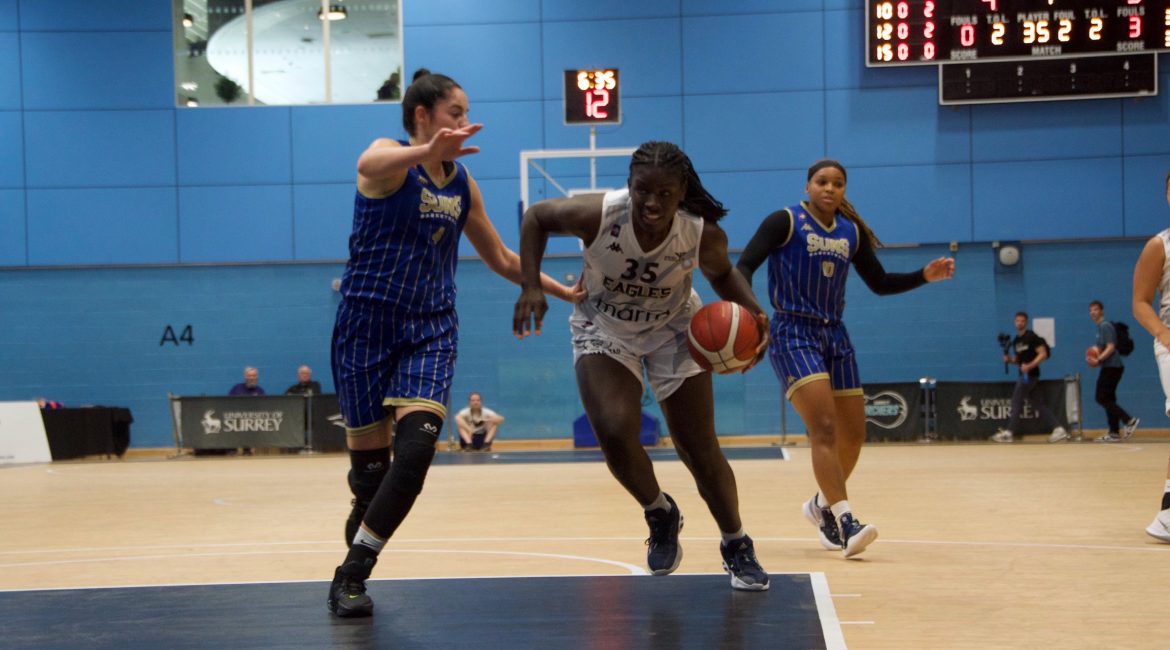 Nette Lewis has pledged to add leadership, toughness and positive energy to Newcastle Eagles after bagging 24 points and 13 rebounds on debut.

But despite the Newcastle duo dominating in the paint, serial contenders Sevenoaks closed out a 15-point victory at the Surrey Sports Park.

The Eagles started well and finished strongly but a seven-minute scoreless spell either side of half-time handed Sevenoaks the initiative.

And head coach Noelia Cacheiro will be bitterly disappointed that the homecourt Suns plundered 17 points from 28 Newcastle turnovers.

Had the visitors tightened up on possession and bettered their 60 per cent shooting from the bonus stripe then Len Busch’s side could have been in trouble.

But the hosts stayed cool when it mattered most as veteran Joyce Monakana led all scorers with 29 points and seven rebounds.

Nolan made it three double doubles in three starts for Newcastle after following up her 17 points and 15 boards against Nottingham with a sensational 18 points and 21 rebounds at the Suns.

Incredibly, the 6ft 1in star was far from her best at the offensive end as she converted just six of 16 shots from the field.

But Nolan still looks odds-on to make her second successive WBBL All-Star 5 after continuing her dream start to life in a Newcastle vest.

Lewis also looks ready made for a big impact on British soil and said: “I’m extremely excited to join the Eagles.

“I love basketball and being able to play always lights my fire.

“I hope to bring the sense of determination and toughness needed to help us accomplish our goals this season.

“I think I can bring leadership, the will to win and lots of positive energy to the team.

“I just enjoy playing the game the right way and having fun.

“I’ve always wanted to visit the UK so having this opportunity just felt right and I’m excited to see what this season has in store.”

Lewis, Nolan and Chloe Gaynor represent a powerful triple threat in the paint but Newcastle were forced to tackle Sevenoaks with just two of their big three.

Gaynor travelled to Surrey but the Eagles fan favourite, who struggled with a quad injury during pre-season, remained benched throughout the game.

The second year professional, who averaged 14 points and 11 rebounds in Romania last season, scored the first points of the game with a neat lay-up.

And Lewis made good on her pledge to add toughness to a team in transition with a series of physical plays at the defensive end.

Newcastle trailed by six points at the end of a free-flowing first quarter — the Suns’ 10 trips to the free throw line helping the hosts open up a 25-19 lead.

Nolan wrapped up her third double double on the bounce with four minutes of the first half remaining.

But Sevenoaks were looking ominously efficient on offence and stretched their advantage to 13 points at the break.

The Eagles required four-and-a-half minutes to score their first points of the second half and Cacheiro’s side trailed by 21 heading into the fourth quarter.

But Nolan and Lewis underpinned a strong display down the stretch supported by skipper Marina Fernandez — the no-nonsense Spaniard adding eight assists and eight rebounds to her 13 points.