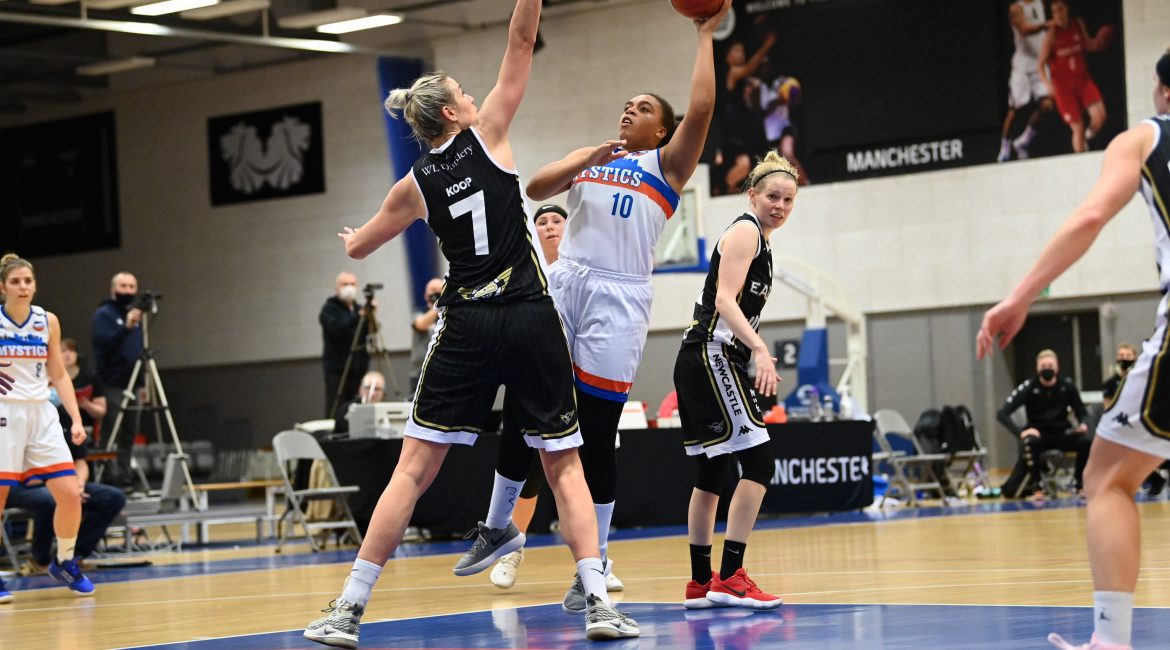 And a deluge of Mystics points sank sorry Newcastle on a day to forget for Chris Bunten’s short-handed Eagles.

But there’s no time to dwell on a thumping loss with perennial contenders and pre-season favourites Sevenoaks on Tyneside from 5.30pm.

And Bunten will be looking for the right response from his shellshocked roster after the women in black were run ragged by the spellbinding Mystics.

Newcastle started poorly and finished with a whimper against a team they overpowered at the Eagles Community Arena just last month.

The visitors conceded 30 first quarter points and a further 23 in the final period.

And Manchester restricted their rivals to a paltry 14 second half points as the visitors converted 21 of 69 field goals overall.

Ali Gorrell didn’t deserve to be on the losing team as the never-say-die guard poured in 20 points and hauled down 10 rebounds.

But few Eagles players emerged with any credit following a second half implosion.

Newcastle saw off a spirited Mystics side at the ECA last month in the group stages of the WBBL Cup.

But Manchester were without former Team Northumbria forward Dominique Allen on Tyneside.

And the Great Britain international’s return for this weekend’s Championship tip-off made the Eagles’ task so much tougher inside.

The absence of Newcastle co-captain Mante Kvederaviciute — still recovering from shin splints — left the visitors short in the paint.

But it was the Mystics’ dead-eye shooting from downtown which dealt the Eagles an early blow and exposed some serious defensive shortcomings.

Manchester were well worth their 30-20 first quarter lead but coach Bunten must have been at a loss to explain his side’s alarming generosity.

And not for the first time this season a failure to close down the opposition on the perimeter meant Newcastle were under pressure from the tip.

A much-improved second period saw the visitors gain a foothold in the game with backcourt duo Gorrell and Maddy McVicar starting to exert some control.

The US guards ultimately combined for 24 first half points with the typically consistent Gorrell adding six boards and three assists.

An impressive Eagles fightback had trimmed the deficit to just four points.

But Newcastle headed into the half-time break with Gorrell and McVicar on three fouls apiece and requiring greater support from their misfiring team-mates.

Disappointingly, it was the Mystics who dominated the third period as the Eagles endured a dreadful 10 minutes of WBBL basketball.

A lack of focus and creativity allowed Jeff Jones’ side to take control.

And Bunten’s side was restricted to just seven points as the visitors’ offence all but dried up.

Manchester led by 10 heading into the fourth quarter but any hopes of another Newcastle fightback swiftly evaporated as the hosts doubled down on defence.

And the Eagles — running a rapidly tiring seven-player rotation — simply had no answer to a late flurry of Mystics baskets.

A repeat performance against the Suns doesn’t bear thinking about for Bunten and co.

But the return of Kvederaviciute could provide Newcastle with the boost they need in the club’s bid to avoid a 0-2 start to the league season.