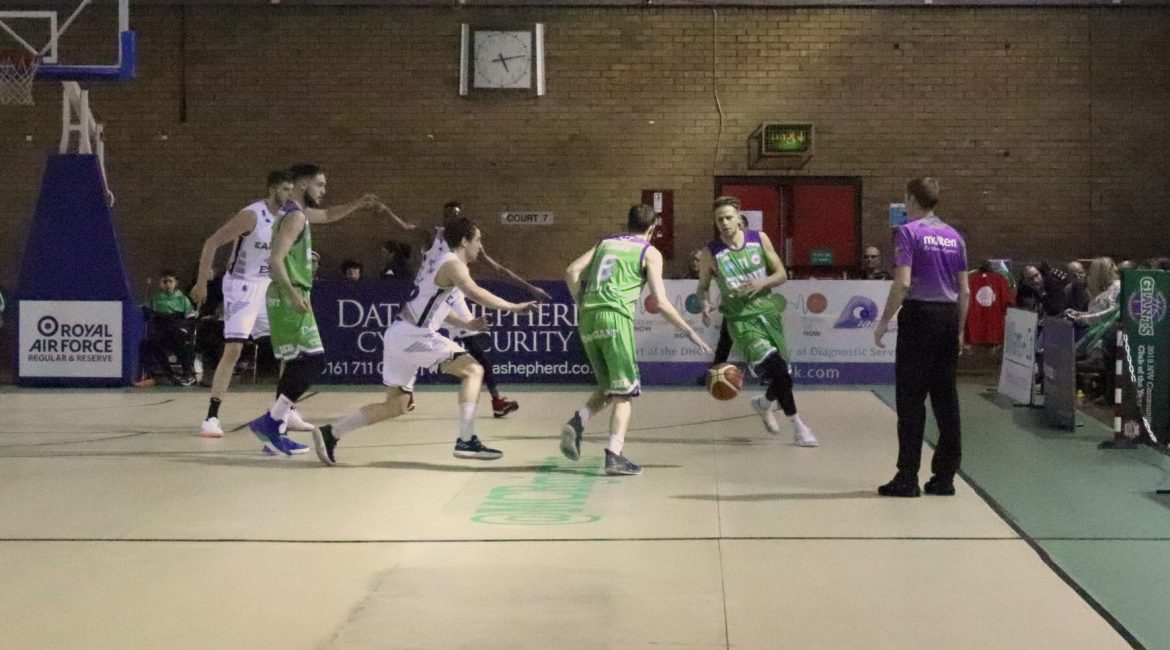 The Newcastle Eagles, as expected, got back on track in The BBL Championship with a road win at bottom of the league Manchester Giants last night. But whether Head Coach Ian MacLeod will be happy with his team’s efforts remains to be seen.

The Eagles certainly struggled in the first half to shake off a gritty Giants side and it wasn’t until midway through the third period that Newcastle made the decisive burst that gave them control of the game. In the end their final margin of victory was comfortable.

MacLeod had been extremely unhappy after Friday’s home loss against Cheshire and knew his side would have to improve vastly or risk allowing Manchester the chance to cause an upset. For long periods, particularly defensively, in the first 20 minutes they failed to do just that.

But, after a locker room break at the half, the visitors came out with much more defensive intensity and commitment in the second twenty minutes taking both periods in that time to stretch away to an important win.

The architects were the usual suspects. CJ Gettys adding 12 rebounds to his top-scoring effort. Rahmon Fletcher 16 assists to his 13 points, 11 of which came in the second half and Darius Defoe also netted 13 points.

However, the man that made the difference was undoubtedly Drew Lasker. The timeless veteran defied the ages once again showing real spark and energy to ignite his teammates after being restored to the starting five.

Adding 14 rebounds and 5 assists to his 21 points it was a shame seeing his game end early as he limped away with time ticking down after a clash with his own colleague Defoe. It is hoped that the injury will not be too serious as certainly when Lasker plays like this, the Eagles fly.

Giants had actually taken an early lead with veteran Yorick Williams and Spaniard Ed Arques in fine form but Gettys and Lasker inspired an Eagles fightback to give them their first lead. Eight unanswered points towards the end of the first enabled Newcastle to shade the period 29 – 24.

It was a different story in the second quarter. The home side went toe-to-toe with their high-ranking opposition and made a real game of it taking the ten-minute stretch by 21 – 17 to cut the gap to a single-digit at 46 – 45 as the half ended.

Back to back triples from Williams and Ingus Bankevics actually put Manchester ahead at 51 – 48 but then Fletcher went into overdrive to back up the earlier efforts of Gettys and Lasker. He scored 8 of a 10 – 0 away run to give Newcastle the gap they needed to control the game.

They eased further in front and with ten minutes and one quarter to play finally got the lead in to double-digits at 70 – 60. Veteran Defoe then stepped up and together with Gettys dominated the paint inside and pushed the Eagles further ahead as they finished the game much the stronger.

So, another win on the road. What Newcastle need now is to take some of this road form into their own arena and start recording wins in front of their own fans. That needs to start this coming Friday as bogey side Sheffield Sharks come to Newcastle for a huge BBL Trophy Quarter-Final clash.