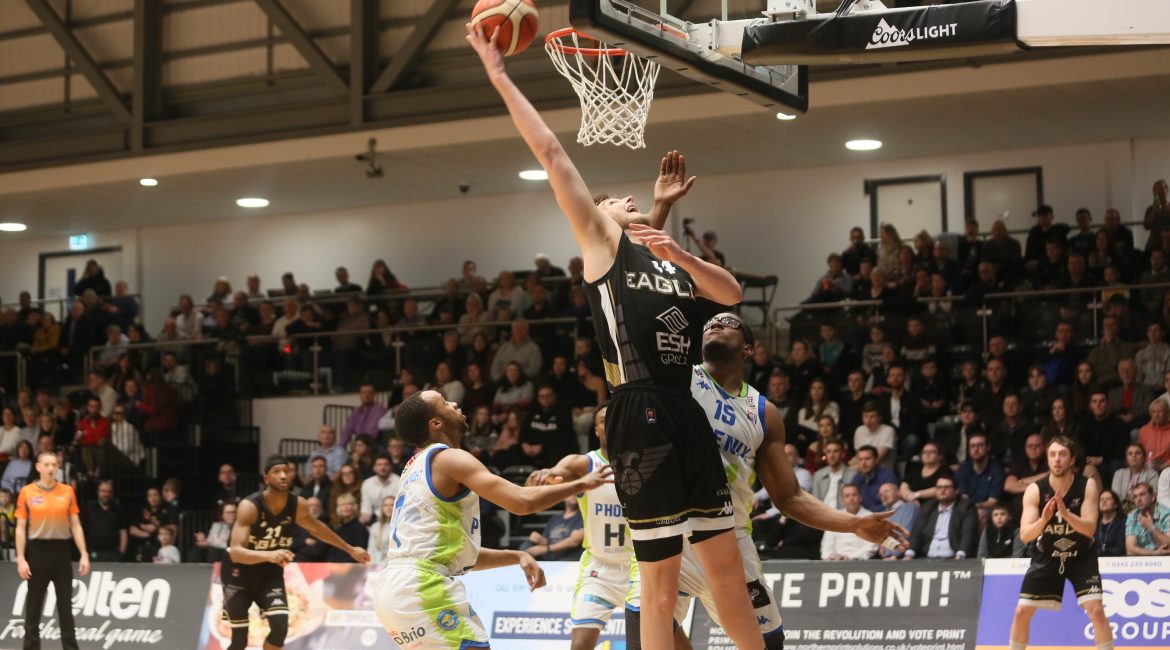 Cheshire Phoenix fully deserved their 88-70 win at the Eagles Community Arena on a night when the hosts never found top gear.

And nothing less than a convincing win on the road against the Giants is required following a night to forget for the black and whites.

The run of strong home form demanded by Ian MacLeod looks further away than ever – just seven days before Sheffield Sharks visit the ECA for a potentially season-defining BBL Trophy quarter-final tie.

But in former Phoenix favourite CJ Gettys, Newcastle boast a player capable of besting the Sharks.

And December’s Molten BBL Player of the Month was blameless as the Eagles hit a season-low against Cheshire.

The seven-footer did gift Phoenix the jump-ball before scoring the first Eagles points of the night and hauling down his side’s first rebound.

And by the time head coach MacLeod opted to give Gettys a mid-quarter breather, the 25-year-old had four points and three boards in fewer than six minutes.

So far, so good. It wouldn’t get any better.

There is no doubt the Eagles are less of a threat without Gettys making his presence felt at both ends of the court.

And the hosts appeared alarmingly weak for the remainder of the opening period as they allowed Cheshire’s seven-man rotation to dictate the play.

But the Phoenix rose from the ashes of a slow start under the expert stewardship of their pint-sized playmaker.

The Morpeth guard, who finished with 17 points, must be the North East’s most natural three-point shooter since Wearsider Adam Barnes graced the Newcastle Arena floor.

And successive first quarter triples evoked memories of Barnes doing the same on his Sky Sports debut more than two decades ago.

But Matthew’s eye-catching scores couldn’t hide an abject defensive effort from every player in black and white – a worrying trend that lasted from tip to buzzer.

MacLeod tried every combination in the book to breathe new life into his heavy-legged roster but Cheshire had 50 points on the board with 22 minutes left on the clock.

And old boy Gettys’ first half haul of 10 points and five boards will hardly have bothered a Phoenix side that led 57-38 at the half.

If the home fans had banked on December’s blowout at the hands of Sheffield being a painful one-off then, in many respects, a woeful first 20 minutes against short-handed Phoenix looked even worse.

And any hopes that an under-strength Cheshire would tire during the key third quarter evaporated fast as Ben Thomas’s side kept Newcastle at arm’s length.

To save face and force a fightback the Eagles needed to start the fourth quarter on fire.

But one point in the first five minutes of the final stanza meant there was no way back for the black and whites.

A double double of 15 points and 10 assists will mean little to Rahmon Fletcher as he reflects on another performance bound to hurt Newcastle’s proud skipper.

And yet again the Eagles hit the road requiring a convincing response against struggling Manchester. You can watch this game live on the BBL YouTube Channel from 5pm.