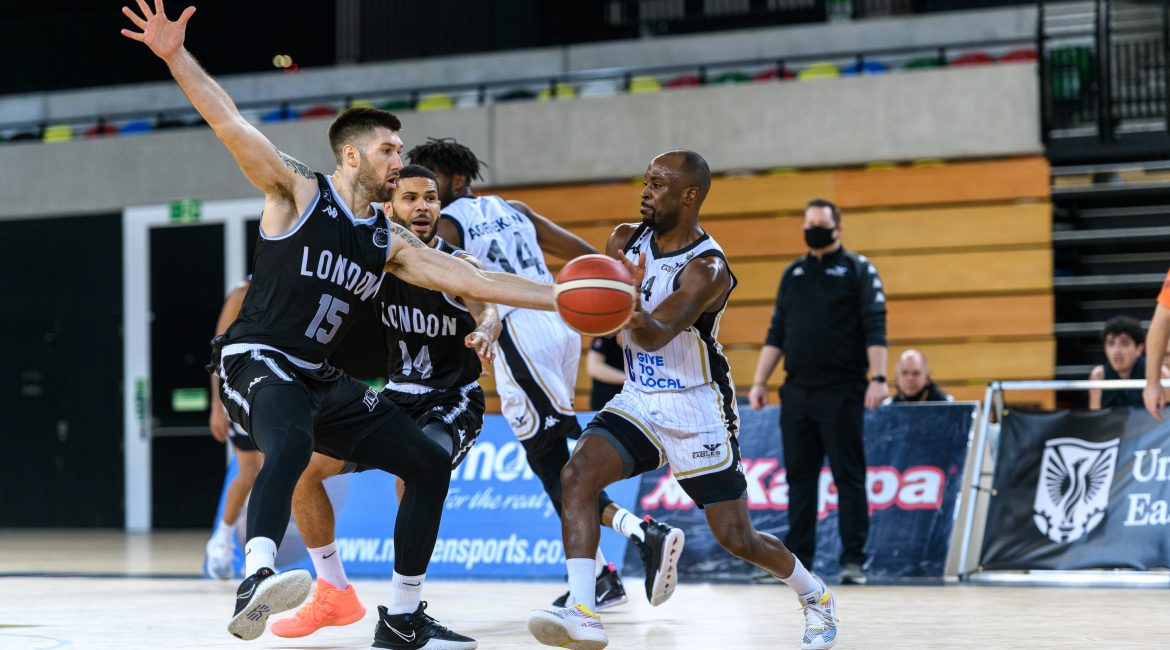 Right now, The Newcastle Eagles need a break, in more ways than one.

A punishing schedule cumulated in their four loss in five games down in London last night. A result that meant they failed to defend their BBL Trophy crown going out at the quarter final stage.

Those five games have been stretched over a mere eleven days and all but one of them has seen star forward Justin Gordon missing with an ankle injury. The last thing Head Coach Ian MacLeod’s men needed was another injury but barely eighty seconds in that’s what they got.

Big man Evan Maxwell was led away to the locker room after crashing to the floor attempting to defend a Lions offence. He was unable to return until the second half by which time the game was starting to slip away from a short-handed Eagles line-up.

Not that the Eagles went down with a whimper. Far from it. Shore Adenekan stepped up into Maxwell’s place and undoubtedly had his best game so far in his fledging Eagles career. A big positive for Newcastle to take away from a defeat that will hurt.

They will also have been pleased to see Maxwell manage to come back in the second half with good effect especially in the third quarter where he picked up eleven points personal. Once again Cortez Edwards was a whisker away from a triple double in an all-action display.

Nine rebounds and 8 assists were his other numbers and his combination play with Newcastle’s Captain Rahmon Fletcher continues to look a potent partnership.

Fletcher was well shackled by the Lions defence only netting seven points but he did add an excellent twelve assists for his team.

After a start disrupted by Maxwell’s injury they slipped seven-points behind at 19 – 12 having to adjust to their unexpected and forced line-up. Their adjustment though once made was decisive as they came storming back.

Inspired by Edward’s last six points in a row in the first quarter they turned that deficit into a three-point lead with a 14 -4 run to close out a highly charged and entertaining opening ten minutes.

Where then did the Eagles lose this game as even deep into the second they still held the lead at 42 – 37? Simple, the Lions got super-hot from beyond the three-point line as made four in a stunning 14 – 2 burst in the final two minutes of the half to take a seven-point lead into the locker room.

Orlando Parker hit three of those with Justin Robinson making the other and in truth that was the one area where London really went to town. When the teams came back out for the start of the quarter London’s momentum continued as they stretched the lead decisively.

They punched out a 10 – 2 start to the second half and it was effectively game over although the visitors never threw the towel in the gap was just too big to haul back despite Maxwell returning to add some offensive power.

For London, top scorer Deandre Liggins the ex-NBA star and former teammate of LeBron James at the Cleveland Cavaliers made six on the night on his way to a game-high 24 points as Lions shot 50% from beyond the arc making 15 of 30.

Eagles themselves hit 13 of 28 from the same range including four from Louis Sayers but ultimately Lions’ outside game made it tough for Newcastle to defend inside when London switched their mode of attack and dominated in the paint notching 46 inside points to Newcastle’s 28.

Once the Lions went up by fifteen there appeared to be no way back for the Tynesiders and so it proved to be. They went toe-to-toe and in the final ten minutes they did get back to within ten points but that was as close as they got.

It would be a tired set of players that arrived back in Newcastle early this morning but they have to dust themselves down, re-group and focus before taking on Cheshire Phoenix at The Eagles Community Arena on Friday. The Eagles will hope to have Justin Gordon back for that one.