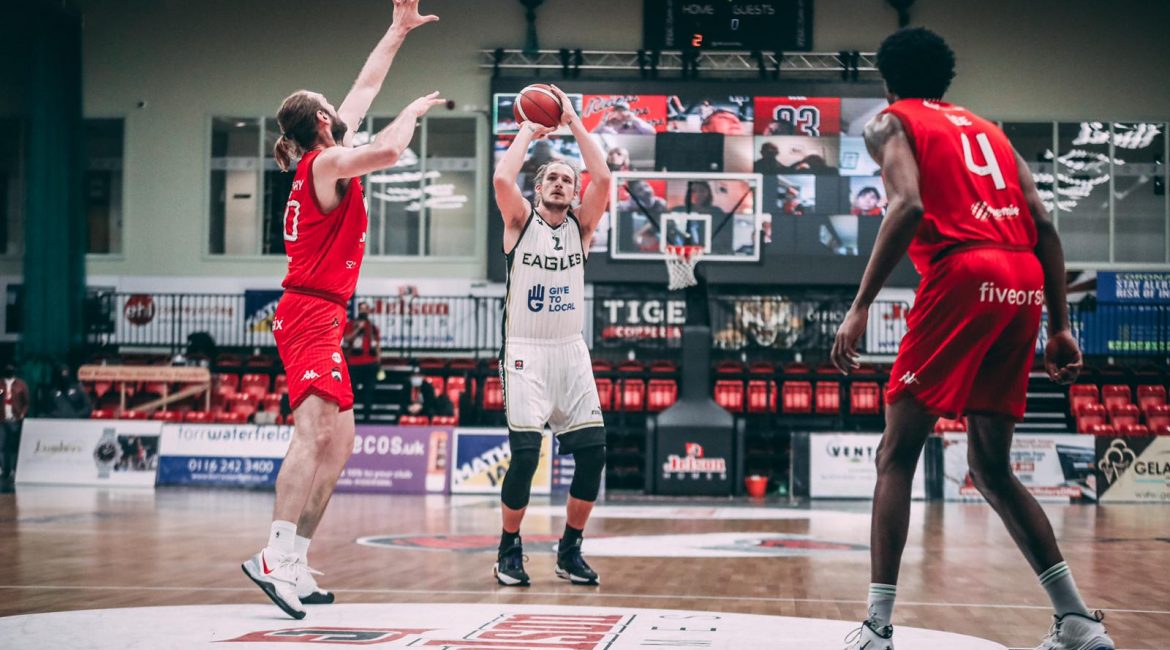 A battling and hard-fought effort from Newcastle Eagles just came up short last night as they dropped another game behind league leaders Leicester Riders.

The Eagles went into a top of the table clash without the injured Justin Gordon and that may have been the crucial difference.

The Riders deeper bench and ability to rotate more often left them with enough energy in the tank as the game ticked down in the final quarter. Until then the top high-flying Championship contenders had stood toe-to-toe for three very even quarters.

Newcastle brilliantly led by Captain Rahmon Fletcher who matched his points total from Sunday’s win at Bristol were just perhaps that one player short in the final analysis. Veteran Darius Defoe promoted to the starting five also gave a manful display once again in support.

Cortez Edwards not for the first time this season flirted with a triple-double adding 10 rebounds and 7 assists to his 12 points but in truth despite those numbers didn’t have the best of shooting nights. But, perhaps, it was the tale of the two benches that finally sealed the Eagles loss.

Louis Sayers did net three triples in the third quarter for 9 points but they were the only points that did not come from the starting five whilst the home bench chipped in with a decisive 18. Had the Eagles had Gordon it may have made been a different story to report.

Newcastle can take heart though that without a full squad they pushed the league leaders all the way and made Leicester work hard for their victory. The Riders increased their league record to an impressive 12 – 1 whilst Newcastle have now lost four league games.

It means that Leicester even at this early stage of the season in terms of games have put down a marker and are definitely the team to catch. Newcastle meanwhile will hope to have Gordon back as soon as possible so they can maintain their top three placing.

For the home side birthday boy and Captain Darien Nelson-Henry was impressive throughout and their point guard Geno Crandall was also one of the Eagle’s major thorns as he led from the front. Cory Johnson hit three triples in his final tally as Leicester’s second half effort won the day.

The game ebbed and flowed for some time before Riders made the final push. The home side had opened well to lead by seven. But a smart time-out from Eagles Coach Ian MacLeod saw them reply with twelve unanswered to give them a five-point lead and turn the game around.

Leicester rallied to take an early lead again in the second period but twice Newcastle pushed back out to five points only for Riders to level the game by the half at 39 – 39. It was tight all the way in the third and when Sayers hit the last of his trio of triples the visitors led by one.

Riders though closed out the period with the final four points to take a three-point and then managed to control the final ten minutes well enough to take them to a deserved victory on the night.

It was a tough night for the Eagles but they have no time to be despondent nor lick their wounds as they will be back in action once again on Friday night. They have the consolation of at least being at home as for the second time in a week they face Sheffield Sharks.

In front of the Sky Sports cameras Newcastle will be looking to bounce back and take revenge on the Sharks who only last Friday took a 90 – 70 win in the Eagles Community Arena. A repeat of that would certainly make it difficult for Newcastle to maintain a Championship challenge.