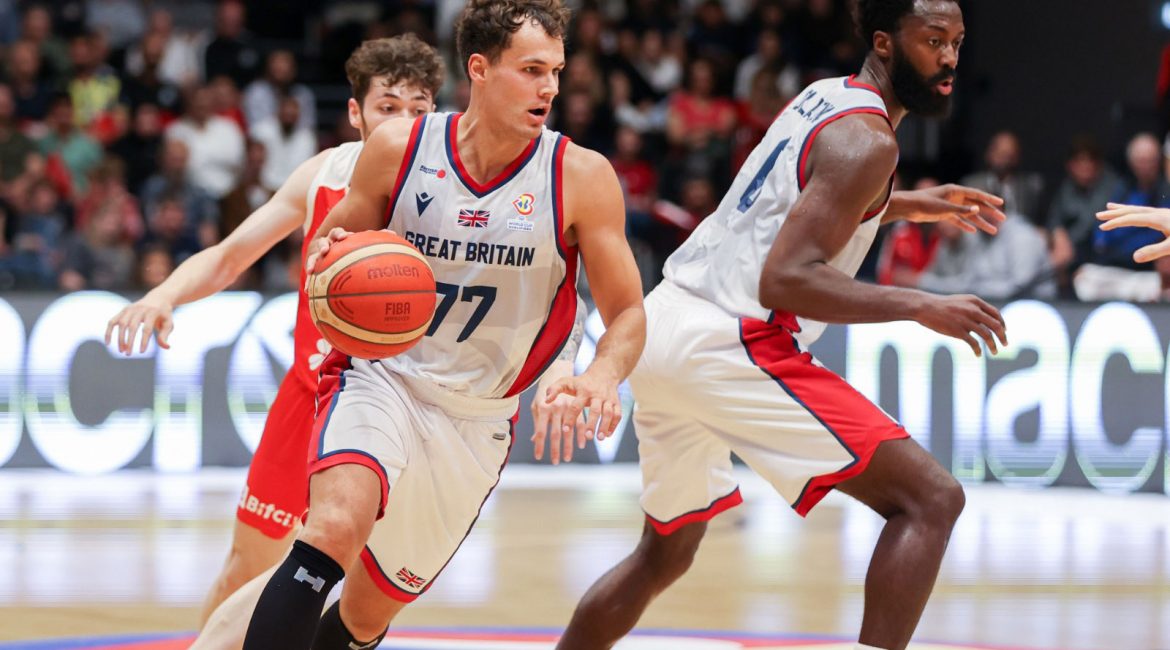 There was Turkish delight on Tyneside last night as hundreds of visiting fans celebrated an eye-catching World Cup win inside a sold-out Vertu Motors Arena.

Nate Reinking must go back to the drawing board after overseeing successive defeats on his long-awaited return to the Great Britain ranks.

But Turkish playcaller Ergin Ataman boldly predicted an 85-71 victory can be the springboard for Eurobasket success in September.

Watch highlights from GBR vs TUR:

And Miami Heat star Ömer Faruk Yurtseven went one step further — the Uzbeki-born centre claiming his adopted nation can go on to win the World Cup!

“We’ll see if we have our full range of players available for the next window,” said Reinking, whose own commitments with the Cleveland Cavaliers could prove challenging moving forward.

“Right now we’re trying to get everybody healthy in time for the second round of World Cup qualifying and for Eurobasket in September.

“We’re going to have some conversations and see where we’re at but we wanted to use this window to work hard hard and take things one step at a time.

“We want to increase our depth chart and widen the net when it comes to British talent.

“There were guys in this camp who really took their chance and that means I’m facing some difficult decisions moving forward.

“From a personal perspective I’m going to be back and forth but the Cleveland organisation has been fantastic so far in terms of supporting my GB role.”

And the new man at the Eagles’ helm could be called on again if Reinking is forced to choose between another World Cup window or a Eurobasket tournament later this summer.

The Turks, led by the irrepressible Shane Larkin, never looked in danger of dropping points in Newcastle despite a spirited performance from the hosts.

And a delighted Ataman said: “It was very emotional for me at the start of the game and I will always appreciate the opportunity to coach the national team.

“I think this group of players has huge potential but we’ll be even stronger in August and in great shape to win Eurobasket.

“I have big confidence in this team and I’m sure we will do a good job later this summer.”

Seven-footer Yurtseven, who made his NBA debut last December, shares his coach’s optimism.

“When it comes to the World Cup I think we can win the entire thing,” said the Tashkent-born star. “We have a team that’s only going to improve and with our full squad we’ll be a completely different beast.”

Turkey defeated GB 84-67 in the reverse fixture last November, prior to FIBA’s decision to banish Belarus from the remainder of the World Cup campaign.

However, back-to-back defeats against group winners Greece meant the visitors headed to Tyneside with the same 1-2 record as Reinking’s men.

And both teams were desperate to bag a second win with Group B records carrying through to the second round of qualifying later this year.

It was the Turks — backed by hundreds of boisterous fans — who started the game the stronger as NBA veteran Larkin sparked a 13-3 tear.

But a Reinking time out steadied the ship and a flurry of three-pointers hauled the home team back into contention.

A 15-2 GB run opened up a first lead of the night as Myles Hesson, Patrick Whelan and Dan Clark all found their range from downtown.

Gabe Olaseni got in on the act as a free-flowing game resumed and it was the centre’s three-point play that opened up a 25-22 GB advantage.

A 10-2 Turkish tear put the visitors back in control before Larkin, well versed in schooling GB’s defence after scoring 22 points in November’s clash, starred again.

The Efes scorer, who has just signed a new long-term deal to stay in Turkey’s top flight, hit seven of his side’s points in the 9-2 burst that closed the half.

GB trailed by 11 as the second half got underway but the Vertu Motors Arena faithful found a new national hero as a thrilling third quarter exploded into life.

Turkey just about managed to maintain their double-digit lead in the face of serial dunker Kavell Bigby-Williams.

But the big by name, big by nature Londoner jammed home four of his first five shots to keep GB within touching distance.

Turkey — missing a trio of NBA stars named in their initial squad — knew they were in a game heading into the final quarter.

But head coach Ataman’s mix of youth and experience closed out what could be a key win ahead of the next international window.

And opposite number Reinking must be hoping he has the luxury of a full-strength squad when GB return to action later this year ahead of another raft of World Cup qualifiers and September’s Eurobasket tournament in Milan.