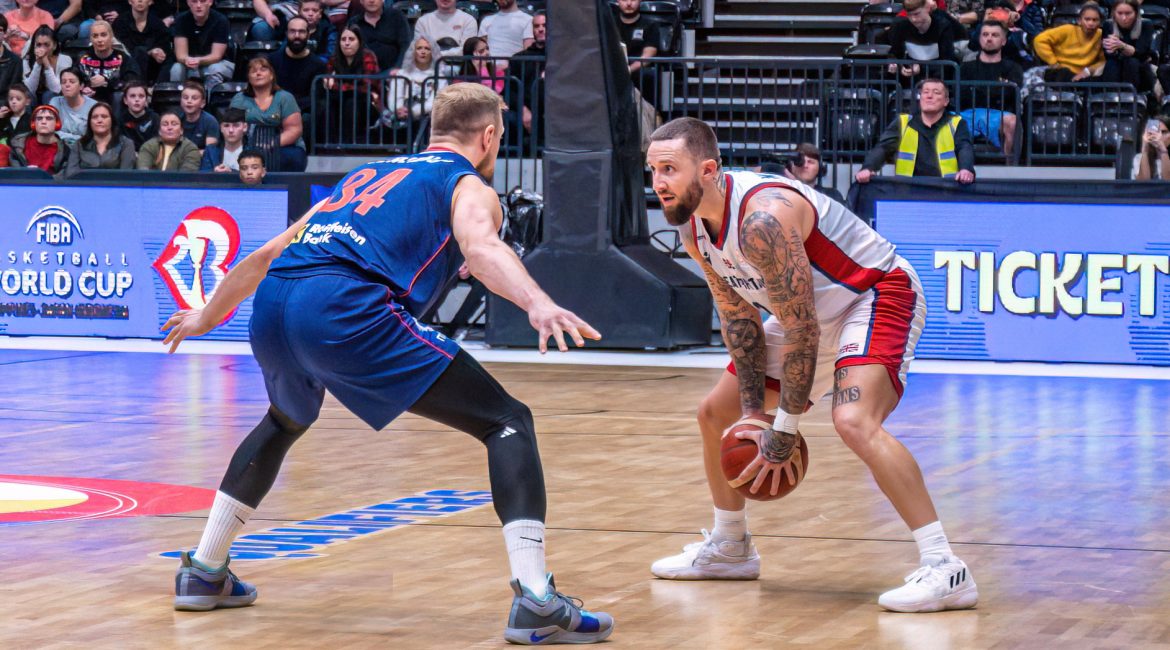 The Newcastle Eagles’ head coach had anchored the national team to a brace of historic wins against Greece and Germany at the Vertu Motors Arena.

But Steutel fell just short of a hat-trick of huge international scalps on his home turf as Serbia, ranked sixth in the world, snatched a hard-fought 74-68 win.

Skipper Gabe Olaseni led all scorers with 20 points — including 10 from 12 from the bonus stripe — and seven rebounds.

But Serbia had four players in double figures as the visitors took a giant step towards the 2023 finals in the Philippines, Japan and Indonesia.

Prior to a disastrous Eurobasket tournament, Steutel had played a key role in creating a genuine feelgood factor around the GB senior men’s programme.

Stepping in for Nate Reinking and leading the side to headline wins against European big guns France, Greece and Germany, the former GB Under 20 playcaller inspired a collective passion and pride in the national vest.

And with Reinking once again unavailable, hopes were high that Steutel could inspire a repeat performance against the Serbs in front of another boisterous crowd on Tyneside.

Both teams went into their latest World Cup qualifier under strength and – potentially – undercooked.

Serbia were missing a string of frontline stars including two-time NBA MVP Nikola Jokić of the Denver Nuggets.

But the most prominent absentee where the hosts were concerned was record caps holder Dan Clark.

The dependable centre announced his retirement from basketball in the close-season but the former Manchester Giant was back on Tyneside in his new role as GB’s general manager.

And a suited and booted Clark will have been buoyed by a battling first half display from a team with plenty to prove following the winless debacle that was Eurobasket.

Once Luke Nelson broke the GB deadlock with a neatly taken lay-up in the fourth minute, the hosts started to show flashes of the form that lay the foundations for Steutel’s winning run as acting head coach.

It was Nelson’s arcing triple that fired the men in white into a 14-12 lead with two-and-a-half minutes of the opening quarter remaining.

And although the visitors hit back, an eye-catching dunk from Olaseni meant Serbia’s lead was cut to a single point with 30 minutes on the clock.

An engaging affair ebbed and flowed throughout a fast-paced second period but Svetislav Pesic’s side scored the last six points of the half to lead 38-34 at the interval.

Steutel has always preached togetherness and commitment during his impressively understated tenure as acting head coach of the national team.

And those key themes will have been reinforced to familiar faces and new recruits alike during another pivotal half-time address.

One of those new recruits — German-based big man Aaron Menzies — started the second period and made an instant impact after slamming down a highlight reel dunk on debut.

But not for the first time under Steutel it was Nelson, with 13 points, three assists and three rebounds, who was shaping up as GB’s most likely matchwinner.

Serbia might have been missing their big guns but the visitors shot into a 10-point lead midway through the third period before a series of Olaseni free throws trimmed the deficit to six with 10 minutes on the clock.

Could there be another dramatic Steutel-inspired comeback? Not this time.

Try as he might, Newcastle Eagles guard Ben Mockford couldn’t claw victory from the jaws of defeat for his club coach — despite a gutsy fourth quarter cameo.