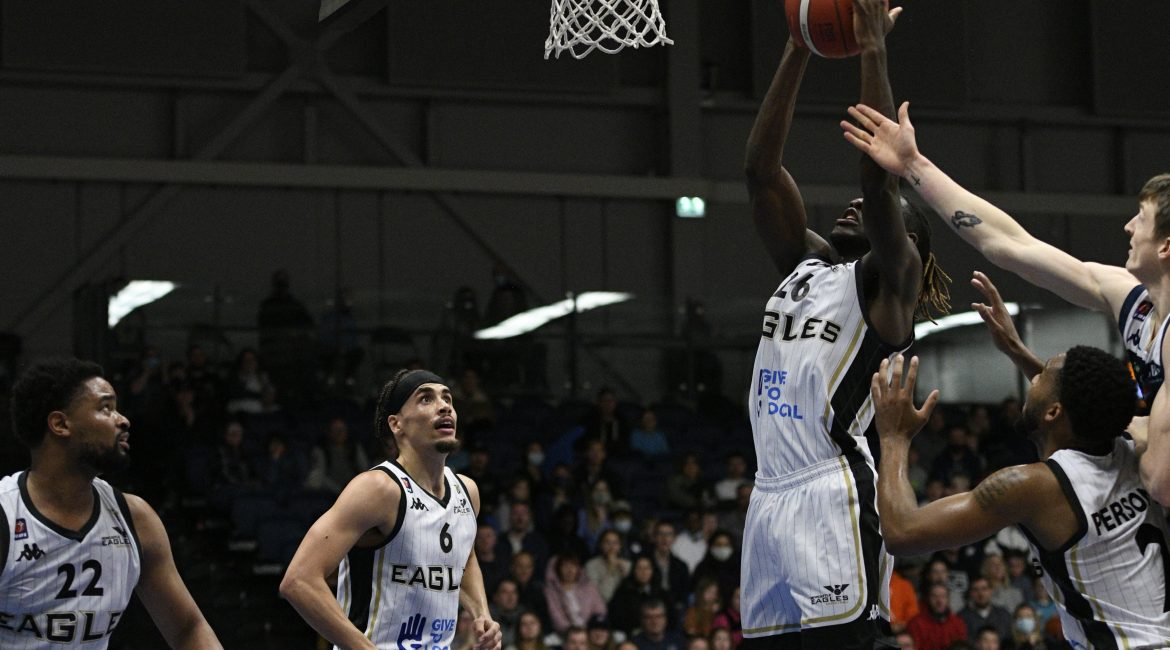 A courageous performance from the Newcastle Eagles against all the odds in Glasgow last night saw them come up agonisingly short at the end of heroic 40-minute effort.

The last thing Newcastle needed after being hit by COVID-19 protocols which denied them three key players, Darius Defoe, Duke Shelton and Louis Sayers was to lose players through injury. Unfortunately, Friday night’s game at Sheffield had landed them with exactly that.

An already shortened roster shrunk even further with Captain and on-court leader Rahmon Fletcher not even travelling due to an ankle injury. Kyle Williams meanwhile did travel and was named on the roster but sat on the bench all night with his hand heavily strapped and played no part.

Jack Marsden was called up from Team Newcastle University to give the Eagles a legal roster but he didn’t see any court time as the Newcastle starting five played all but three minutes and three seconds. Those minutes going to Sauveur Kande.

Eagles Academy graduate Themba Yabantu played all forty minutes as did Captain for the night Corey Johnson and Wesley Person Jr. The latter two being the main reason Newcastle stayed in a game that had threatened to run away with them at half-time.

Johnson had 36 points which included six of ten from 3-point range and Person Jr. had 33 points netting five triples of his own. Daniel Johnson-Thompson may not have scored any points but his rebounding was excellent as he pulled down 11 boards.

But the end analysis will be that with a 1 – 5 record and only two games to play Newcastle will almost certainly go out at the Group stages of a competition they won back in January of last season with a victory over London Lions.

That will be a disappointed for Head Coach Ian MacLeod who along with Assistant Jack Burgess were also forced to remain at home and couldn’t add their input from the side lines. The man at the helm was the Eagles other assistant ex-Plymouth Raiders Head Coach Gary Stronach.

He did all he could do help his side and can be proud of both his own efforts and those of his players from whom he coaxed an incredible performance that in the second half looked as if at one stage was going the way of the Eagles.

Newcastle had started brightly with both Johnson and Person Jr. getting into the groove early on they were never behind in the first period. Twice Glasgow levelled the game but Person Jr.’s triple at the end of the first ten minutes gave his side a 28 – 25 lead.

It meant that from nowhere they’d established a fifteen-point advantage at the interval going into the locker rooms 56 – 41 ahead.

If that run was remarkable then what followed was even more so. Seemingly down and out, Newcastle roared out of the blocks as the second half opened. Fifteen points without reply suddenly saw them level and all of a sudden an unlikely win was on the cards.

Johnson and Person Jr. were still finding the bottom of the bucket. Then with an improved performance from Terrell Vinson who’d had a poor first half the Eagles completely turned the game around and suddenly led by five at 67 – 62 but Glasgow closed the third with an 8 – 2 run that gave them a one-point lead to take into the final period.

Then nine points to three to start that period to the home side more or less sealed the deal. Eagles kept battling and got within three at one stage but tiring legs couldn’t force that final effort to get them a win their performance probably deserved.

Newcastle aren’t out of the qualification stakes just yet. They will have to win both of their last two games and hope for Cheshire to lose their last two to qualify and next Sunday the two sides meet in Cheshire in what might be a winner-takes-all contest.