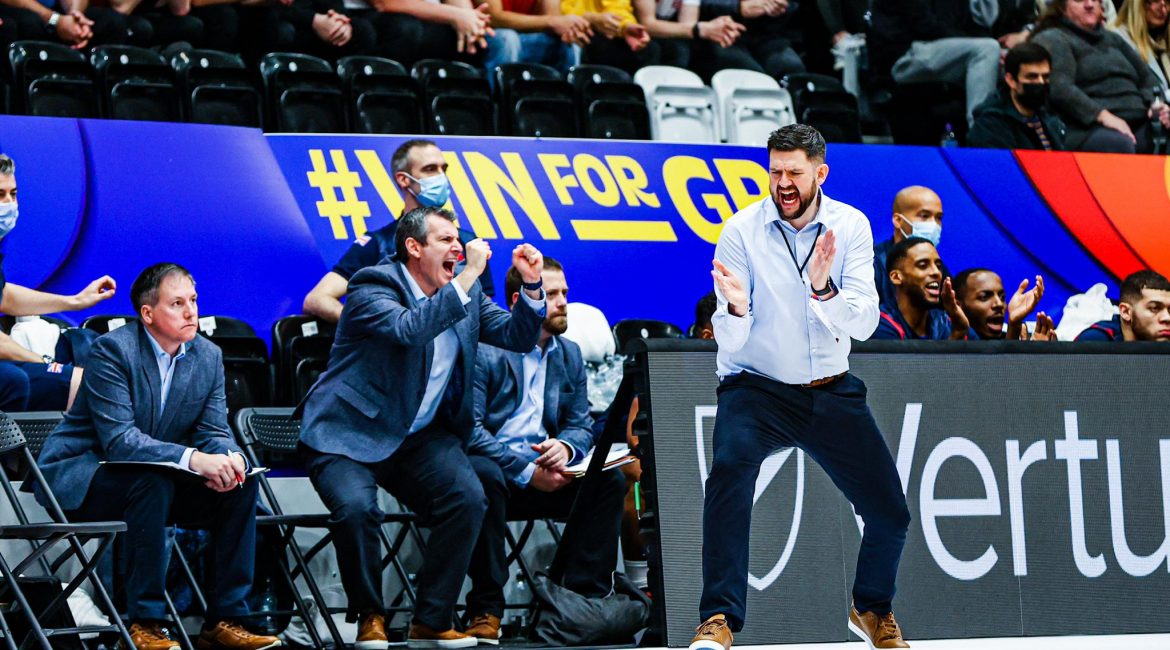 Super Ted Okereafor paced Great Britain to another dramatic win on Tyneside as Marc Steutel’s men scripted a Greek tragedy for the ages.

A sell-out crowd witnessed a World Cup thriller as the home side followed up last February’s shock win against Germany with another famous victory in Newcastle.

And it was record-breaking guard Okereafor who underpinned the 78-69 win that will send shockwaves across Europe.

But this was another example of the unflinching spirit and burning ambition running right through one of international basketball’s rising forces.

For Okereafor, a key member of GB’s core group and a trigger for the nation’s recent success, this was a special return to the Vertu Motors Arena.

The 29-year-old became the first player to win a 50th consecutive senior cap, breaking a 45-year record, and marked the occasion with a trademark early triple in front of a boisterous homecourt crowd.

And it was Okereafor who set the seal on a battling first quarter from the determined hosts as he bagged a buzzer-beating put-back two to level the scores at 23-23.

But Greece, missing their head coach and several star men, proved their pedigree with a series of strong inside plays during a competitive opening period.

And in Promitheus Patras forward Dimitrios Agravanis the visitors boasted a battering ram of an offensive weapon.

The 26-year-old racked up an impressive 13 points before half-time but the visitors headed to the locker rooms with their work cut out.

Although the Greeks took a 38-33 lead into the break, Steutel’s men had shown plenty of the fighting spirit that secured a place at next summer’s Eurobasket.

And a shock result was still on the cards as two teams separated by 32 places in the latest FIBA rankings threatened to serve up a thrilling second half.

Just as Germany had rolled into the VMA last February as odds-on favourites to defeat GB, Savvas Kamperidis’s side were hot favourites to win this World Cup qualifier.

But Steutel, the North East-based former Northumbria University head coach, has instilled a never-say-die attitude in a roster on the rise.

And with Okereafor and veteran forward Dan Clark making every minute count, the men in white were more than a match for the two-time European champions.

Greece started the second half as if their lives — and the nation’s lofty reputation — depended on it.

Steutel was forced to call a timeout within two minutes of the restart as the visitors scorched their opponents with a blistering 10-0 tear.

But GB regrouped and refocused with that man Okereafor determined to celebrate his record-breaking appearance in style.

The all-action guard hit three booming triples in quick succession to haul the hosts back into contention.

And the third of those towering shots from beyond the arc, with just four seconds of the third quarter remaining, reduced the deficit to a point with 10 minutes to play.

Incredibly GB broke the game wide open on the back of a 17-3 streak to start the final period.

And GB head to Turkey on Sunday buoyed by one of the biggest upsets in European basketball history following another memorable night at fortress VMA.