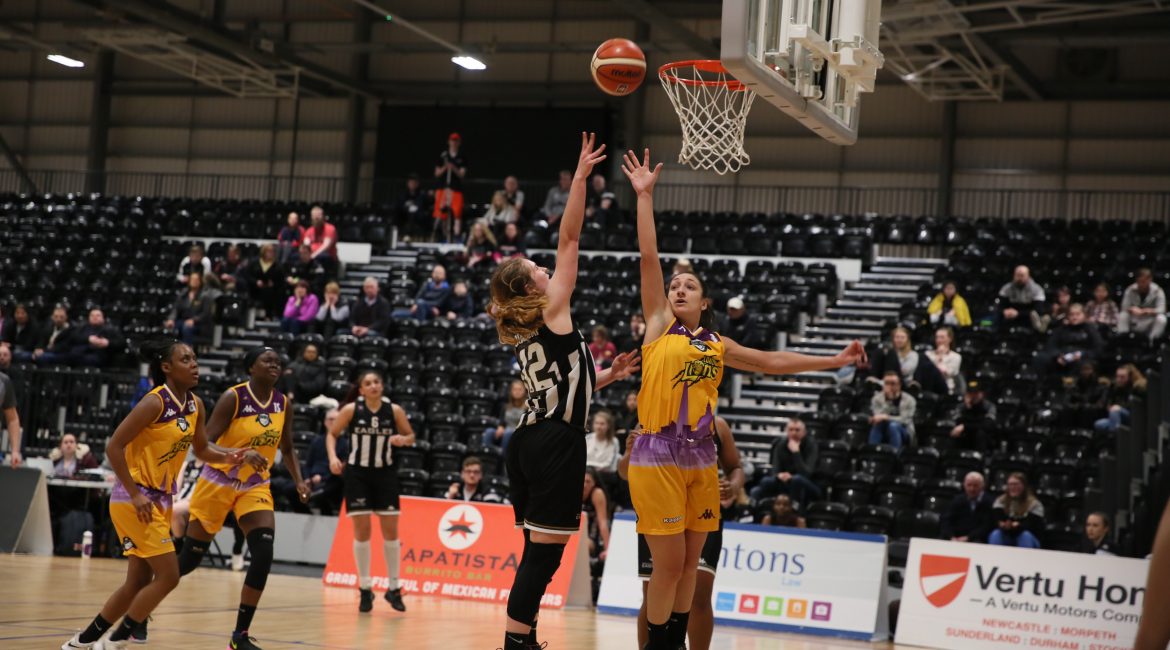 A dramatic final quarter at the Eagles Community Arena saw Newcastle Eagles take a huge step towards securing their WBBL play-off place as they managed a nail-biting 59-56 win over London Lions.

On the back of perhaps their best performance of the season, a 96-87 win over Leicester Riders just a week prior, playcaller Chris Bunten’s side got off to a flying start forcing an early air ball from their London opponents.

However, it took until midway through Q1 for the scoring to be opened – with Newcastle’s Noelia Cacheiro converting a difficult mid-range jumper shot to give the hosts the lead.

What followed the opening of the scoring was a back and forth contest, with neither side seemly able to convert their myriad of a chances.

However, thankfully for the Eagles, their skipper Giulia Simioni decided she had had enough of the lack of scoring, converting two free throws before sinking a magnificent three pointer to extend the home sides lead to 12-7.

And things continued to get worse for London, with the visitors seemly unable to deal with the Eagles offence – the score sitting at 18-10 at the end of Q1.

Q2 started in almost the exact same fashion as Q1 – with an early Lions turnover.

But unlike at the start of Q1, the Eagles managed to continue their offensive dominance, with Rachel Bland netting an impressive three pointer out wide to push the Eagles lead to 11.

And, good work from Eagles forwards Kalina Axentieva, Georgia Ohrdorf and Keziah Lewis, meant that heading into half-time, Newcastle were in control of the contest, holding a 32-26 lead over London.

After half-time, Newcastle were in no mood to hang about with Eagles veteran Steph Gandy and forward Ohrdorf keen to extend Newcastle lead further.

While Gandy opened the scoring in Q3, it was Ohrdorf who managed to get the Eagles Community Arena crowd to its feet, displaying her strong defensive work ethic, before racing down the other end of the court to sink a tough three pointer.

With just 4:08 sitting on the clock in Q3, the Eagles were looking to push their lead.

But the Lions came roaring back into the contest – with the Eagles seemingly comfortable lead evaporating before their eyes – the score sitting at 46-45 in favour of the Eagles heading into the final quarter.

The start of Q4 was a nervy one, with neither side able to convert their early opportunities.
While the Eagles managed to zip the ball around with easy, it was the Lions who opened the Q4 scoring to tie the contest with a simple free throw.

The Lions then managed to take their first lead of the game to silence the ECA – the score sitting at 48-47 in the visitors favour.

The game then changed hands again thanks to some good work in the paint from Gandy which gave the Eagles their lead back – 50-48.

Bunten’s side then had a chance to push their lead to four points when skipper Simioni managed to waltz through the Lions defence only to misfire when it came to the crucial lay-up.

However, the Lions finally looked as though they had found their stride with the visitors then taking the lead again with just under two minutes left on the clock – the score sitting at 54-53 in their favour.

But, with just a minute left on the clock, Newcastle managed to regain the lead in stunning fashion – with Keziah Lewis managing to convert a crucial free throw to hand Bunten’s side the lead – 56-54 in the host favour.

London knew that time was running out to take back the lead – but unfortunately, they ran into some monstrous defending from Gandy and Bland who managed to halt the Lions attack.

Newcastle then extended their lead to four with just 33 seconds left on the clock thanks to some super shooting from Bland.

While a late Lions basket left the Eagles feeling nervy – a clutch free throw converted by skipper Simioni wrapped up the game for Bunten’s side, who finished the contest 59-56 winners.