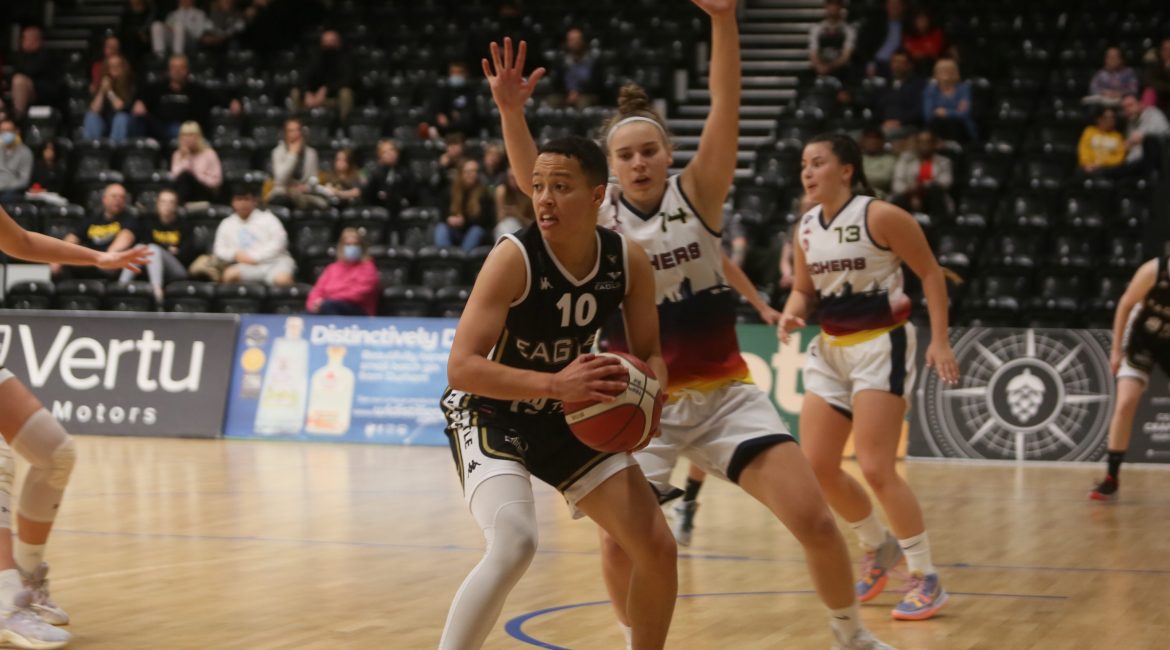 Newcastle Eagles WBBL finally broke their Vertu Motors Arena duck to win in front of their own fans for the first time this season.

But a game of two halves saw Jekyll and Hyde Newcastle struggle for the opening 20 minutes before breaking the game wide open after the break.

Summer signing Ebony Horton led all scorers with 25 points and nine rebounds on another stellar night for the supercharged guard.

And skipper Marina Fernandez finished the game in fine style to add 14 points to the Eagles’ impressive final score.

A 28-minute delay to tip-off, due to one of the designated match officials calling in sick, appeared to affect the rhythm of both sides early on.

Newcastle settled the sooner of the two teams to open up a 9-0 lead but it wasn’t until the sixth minute that the Archers finally found the net.

The Eagles maintained a commanding lead throughout the opening period but Cardiff did enough to stay in contention.

And a series of unforced errors from the errant Tynesiders set alarm bells ringing on and off the court.

Not for the first time this season poor ball retention was clearly irking Newcastle playcaller Bunten.

And seven first quarter turnovers had the Eagles’ head coach scratching his head in disbelief.

The women in black led 20-13 heading into the second period but an 11-5 Archers tear turned an initially scrappy game on its head.

Bunten was fuming as too many of his players continued to miss key defensive assignments and pass up a succession of open looks from beyond the arc.

And when Cardiff’s Shannon Hatch reduced the deficit to a point with a neatly taken two, it looked like familiar failings would come back to haunt the increasingly hesitant hosts.

Bunten had tried a raft of rotations to kickstart a sloppy display but only Horton, who took 16 points into the break, had emerged with any credit following an unconvincing first half.

Meanwhile, Archers pair Hatch and Kim Kheing were causing Newcastle all kinds of problems in the paint and the Eagles had to rely on a timely 11-4 burst to take a 36-28 lead into the locker room.

Whatever a bristling Bunten said during the break appeared to work as last season’s WBBL Playoff finalists finally hit top form during a dominant third period.

A much-needed injection of intensity at both ends of the court put Collins’ team on the back foot and Hatch’s fourth foul of the game clearly hurt the increasingly brittle visitors.

Suddenly Newcastle looked more like the team that comfortably dealt with derby rivals Durham seven days earlier to claim a first league win of the season.

And whereas the Eagles had allowed Cardiff to claw their way back time after time before the break, this was the convincing quarter that finally closed the door on the battling Welsh.

The hosts took a one-sided period 17-6 with Horton pacing a much-improved Newcastle performance on the back of 20 points, six rebounds and three assists.

Bunten’s side led 53-34 heading into the last 10 minutes and an Abby Lowe triple piled further pressure on the tiring Archers.

That early hesitancy had given way to power and purpose as the hosts reverted to the high-energy basketball that underpinned a strong start to the season.

And it was Lowe who epitomised everything that was good about the Eagles’ eye-catching second half bounceback — the GB 3×3 star bagging a fifth steal of the game before racing half the court to convert a deserved three-point play.