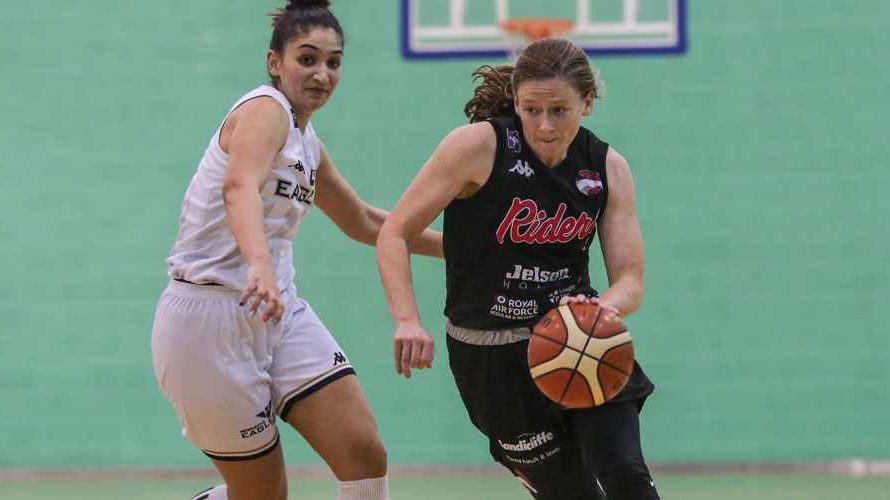 Fatigue finally caught up with an injury-hit Newcastle Eagles as Chris Bunten’s side was given a lesson in WBBL basketball by title challengers Leicester Riders.

The hosts ran out 97-57 winners to maintain their position at the top of the championship table.

And head coach Bunten cut a frustrated figure as the Eagles failed to build on Saturday’s stunning 82-49 win at Cardiff.

“Leicester caught us at the end of a run of six games in 16 days and we just ran out of gas,” he admitted.

“They’re a very, very good team and they found a way to pick us apart.

Mac Turns Magnifying Glass On Team To Rebound From Riders

“We went into the game full of confidence after breaking our losing streak in Cardiff but Leicester are a very different team.

“They exploited our weaknesses and attacked us from the start – knowing that we were tired and we had a few knocks.

“We need a break and now we have time to regroup, get everyone fit and go again in the New Year.
“We’re battered and bruised but we’ve given it our all in the last few weeks and there are plenty of positives to take into 2019.”

Leicester led 26-10 after a powerful first period and the pressure on Newcastle proved relentless throughout.

The Eagles managed to steady the ship and reduce the deficit by two going into the half.

But the Riders turned the screw after the break on the back of a brilliant double double of 23 points and 16 points from Claire Paxton.

The hosts outscored a rapidly tiring Newcastle 31-10 in the final quarter but the performance of WBBL rookie Maya Price must have pleased Bunten.

The GB junior international hit 20 points and claimed 10 boards just 24 hours after her 15 points and nine boards helped to underpin an impressive win in Wales.

The Eagles were trailing by nine heading into the second half against the homecourt Archers but what followed was a remarkable turnaround.

Bunten’s players restricted the hosts to just 11 points in 20 second half minutes – plundering 53 points in the process to claim a superb 82-49 win.

“I’d like to say it had something to do with the half-time team talk but in actual fact I didn’t say much to the players during the break,” added Newcastle’s playcaller.

“If anything, I simply asked them to play their natural game and relax. That’s exactly what they did.

“After a run of defeats you start to doubt yourself as a player but that second half in Cardiff reminded everyone what we’re capable of.

“I wanted to take at least one win from the weekend and it felt great to snap our losing streak in style.”

The Eagles are back in action in January with back-to-back homecourt fixtures against Manchester Mystics and Caledonia Pride on January 5 and 6.