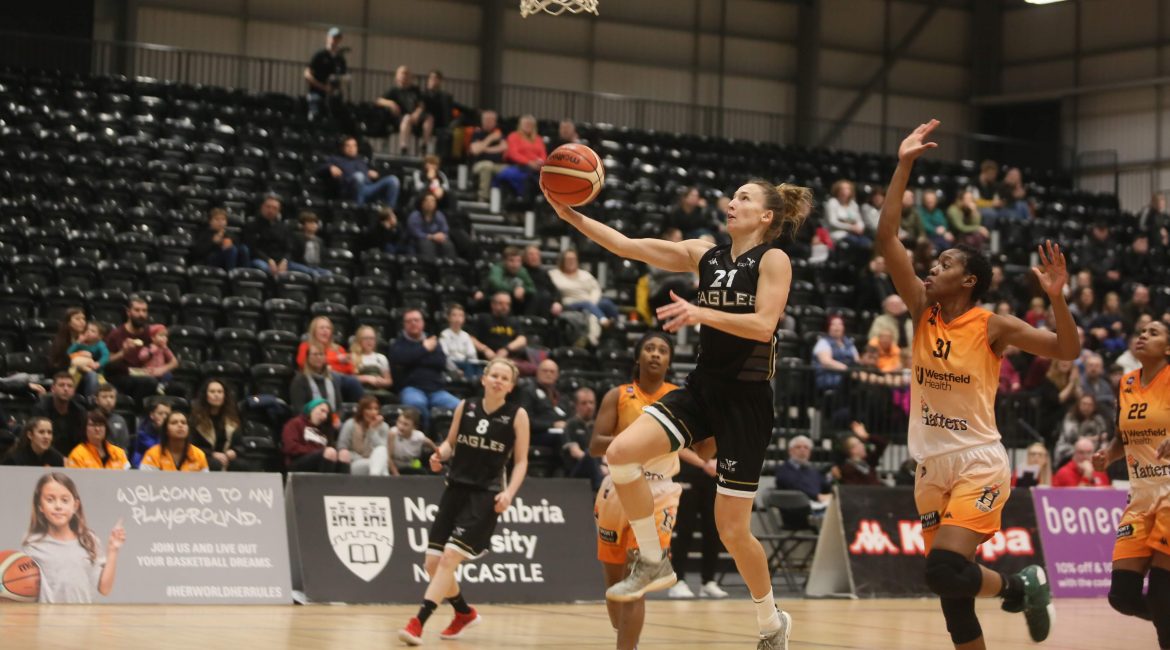 A nerveless second half display from Newcastle Eagles WBBL laid the foundation for an eye-catching 82-75 win against Sheffield Hatters.

And a second victory in two days against a top four rival set the seal on a perfect weekend for Chris Bunten’s fast-improving roster.

An inspired Mante Kverderaviciute fell just three assists short of what would have been a famous triple double.

And the Lithuanian is nailed on to make this week’s WBBL All Star five after bagging a combined 49 points, 18 rebounds and 14 assists inside 24 hours.

The Eagles had the chance to move to 4-1 in the league following Saturday’s assured 83-68 road win in Manchester.

But the Herculean effort that had underpinned the previous day’s fourth quarter turnaround clearly affected the hosts during a scrappy first period.

Newcastle had blitzed the homecourt Mystics on the back of 26 points in the final 10 minutes.

But it was a classic case of after the Lord Mayor’s show for Bunten’s players on their return to action as they initially struggled to find any rhythm.

Sheffield took full advantage to take a 16-9 lead into the second period.

But the Eagles gradually played their way back into what became another thrilling advert for WBBL basketball.

Mante Kvederaviciute led the charge with a slew of clutch baskets – including the arcing three that put Newcastle within touching distance of the Hatters.

Georgia Ohrdorf, fourth in the league for scoring with an average of 18 points per game, finally made her presence felt midway through the second period.

And the in-form Aussie, who leads the WBBL in rebounding, hit the two pointer that fired the hosts in front five minutes from half-time.

Sheffield were starting to feel the pressure and playcaller Vanessa Ellis cut a frustrated figure in the face of some inexplicable turnovers.

The Eagles were successfully turning the screw and another looping three, this time from the smooth hands of Swiss Giulia Simioni, sent the black and whites into the locker room with a 38-33 lead.

As her Hatters stars headed for the break, Ellis was locked in conversation with referees’ assessor Alan Richardson.

But Sheffield’s problems were less to do with the officials and more down to an inability to retain possession in the face of Newcastle’s stifling defence.

That pressure was maintained throughout a relentless third quarter as the Eagles edged towards a second win of the weekend.

And it was only thanks to a buzzer beating three-pointer from Hatters’ leading scorer Roshina Rosario that the visitors remained within touching distance 10 minutes out.

Sheffield were going nowhere in this battle of the WBBL’s northern heavyweights.

And when Newcastle centre Lisa Koop picked up her fourth foul – swiftly followed by a fifth for questioning a cruel call – the Eagles faced a serious test of their mentality and game management.

The cool heads of Kvederaviciute and Simioni kept the Hatters at bay with the former swiftly advancing to a game high 27 points.

And with another wonderful win under their belts the Eagles sit joint third in the WBBL with a single-digit defeat to reigning champions Sevenoaks Suns their only loss to date.