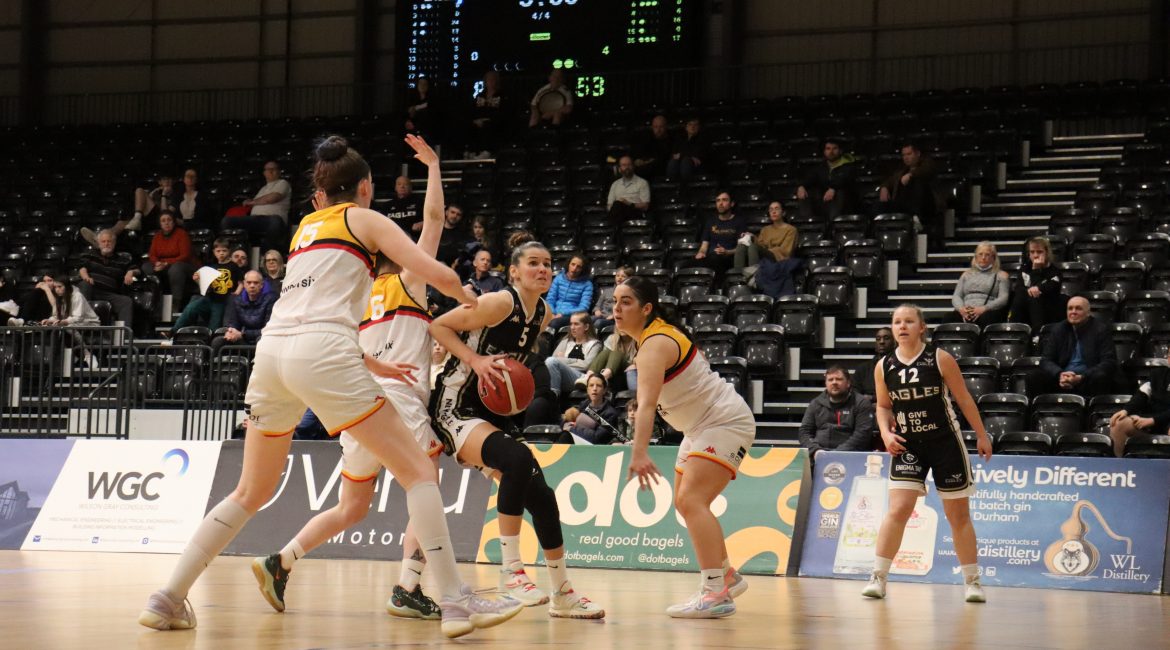 Newcastle Eagles warmed up for tonight’s hotly anticipated Tyne-Wear derby in style with a convincing win against Gloucester City Queens at the Vertu Motors Arena.

Noelia Cacheiro’s side snapped a three-game losing streak by doing the double over this season’s struggling expansion franchise.

And a vital victory could hardly have been better timed ahead of the visit of Abby Lowe’s Durham Palatinates.

Newcastle thumped Gloucester on the road last month and the Queens quickly felt a painful sense of deja-vu as the Eagles opened up a 22-point half-time lead.

Maddy McVicar went on to sink a sensational six three-pointers to lead all scorers with 24 points.

And there were big double doubles for captain fantastic Marina Fernandez and forward Layne Murphy as the duo combined for 28 points and 22 boards.

And that outstanding result by Lee Davie’s in-form side heaped further pressure on an Eagles roster struggling to keep pace in the playoff race.

No wonder the visit of basement club Gloucester had become a must-win fixture and the hosts looked in no mood to let another two points go begging.

A strong start saw arcing triples from McVicar and Ruth Thornley — the latter enjoying a rare appearance in the starting five — underpin an 8-2 lead.

But there’s no place for complacency in the WBBL and a mobile Queens roster seized on Newcastle’s subsequent lapse in concentration.

A superb 12-0 run stunned the homecourt crowd before McVicar stemmed the tide with a timely two-pointer.

The Eagles had been warned and a quarter paced by big runs ended with a 14-0 tear in the Tynesiders’ favour — Fernandez closing out a pulsating period with back-to-back buckets from beyond the perimeter.

Newcastle took a 10-point advantage into period two and seven minutes later the hosts had opened up a seemingly unassailable 20-point lead.

McVicar was enjoying her most productive half in months as she poured in the points from every angle.

In the absence of Jessica Eadsforth-Yates — who quit the club earlier in the week — the Eagles’ experienced number four had been asked to pick up the point guard duties.

But that added responsibility in possession didn’t prevent McVicar from shooting on sight as the US star moved to 19 points before the break.

Yet again Fernandez had been Newcastle’s outstanding all-round performer during the first half and the Spaniard headed to the locker room with 13 points, six boards and five assists.

But the biggest cheer of the night was reserved for Gerda Morkunaite who leapt off the bench to drain a buzzer-beating triple from way downtown as the Eagles took a 51-29 lead into the break.

With the points in the bag — and influential centre Chloe Gaynor restricted to bench duties — it was all about confidence building and cute game management heading into tonight’s eye-catching derby.

Head coach Cacheiro split Thornley and Rachael Bland’s minutes as Newcastle’s most experienced pair made a key contribution within a nine-player rotation.

But home fans were hoping to see more of Morkunaite and Mollie Arnold down the stretch as the hosts took a 74-47 lead into the fourth quarter.

The latter — who rejoined the club in January — started the final period and made an instant impression with a superb steal at the defensive end.

But coach Cacheiro will have been concerned to see Dora Cipcic fall heavily in the final minute — the Croat carried to the locker room by Gaynor on the final buzzer.

Tickets for today’s derby against Durham are still available on the box office and on the door: