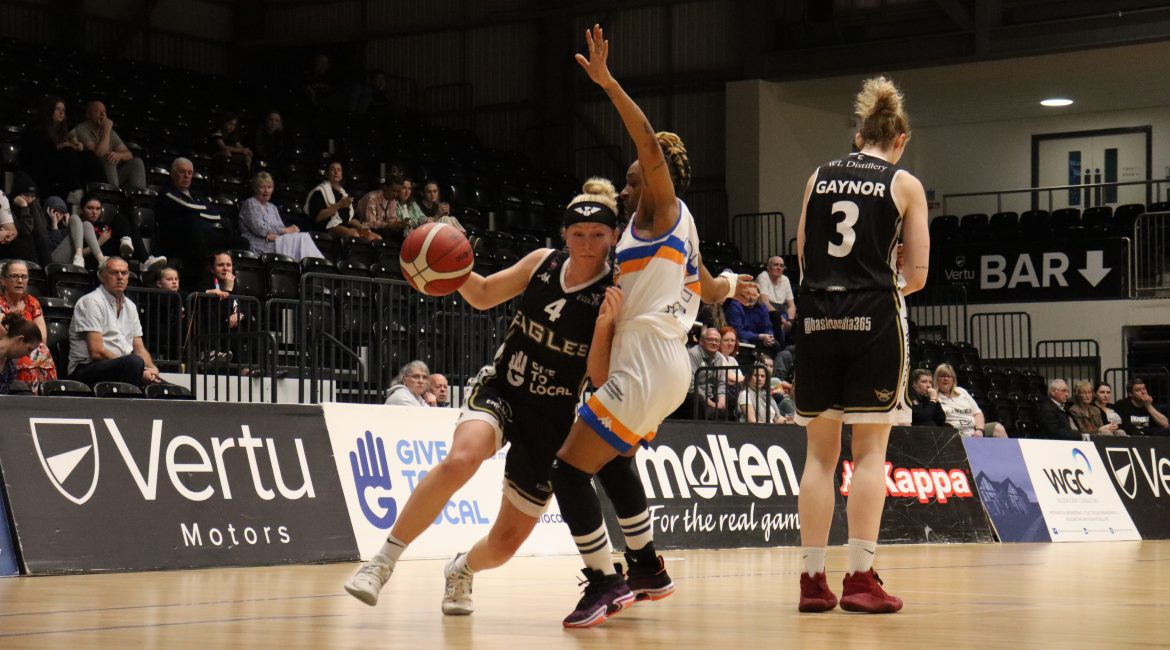 Newcastle Eagles are clinging on to their playoff dream following a dispiriting defeat to Manchester Met Mystics at the Vertu Motors Arena.

And head coach Noelia Cacheiro will demand a positive reaction from her confidence-sapped roster after the Tynesiders slipped to a third successive loss.

Wins for Durham and Caledonia Pride the previous day only served to underline the need for a Newcastle win against the Mystics as the race for the top eight hots up.

And the Eagles required a strong start against a Manchester side beaten 80-77 by Essex Rebels 24 hours earlier.

Indeed, Chloe Gaynor had pointed to a pedestrian first quarter as one of the primary reasons for Friday night’s disappointing defeat to the Pride in front of a record 1,222 fans.

And Newcastle looked determined to right that wrong as they took the game to the Mystics from the tip-off to open up a deserved 11-5 lead.

But the visitors — perhaps distracted by a 30-minute delay to the game due to a problem with the officials — finally gained a foothold in the first quarter.

An impressive 8-0 tear saw Manchester lead for the first time and Jeff Jones’s side looked the livelier of the two teams as the clock ticked down towards period two.

Indeed, when Maddy McVicar surrendered possession in the dying seconds of a fast-paced quarter the Mystics took full advantage.

Livewire guard Rachel James beat the clock and the Eagles’ defence to convert a driving layup and open up a seven-point lead.

Newcastle might have been trailing but the women in black had upped their intensity and improved their productivity in the 48 hours since defeat in The Big One.

And yet Manchester extended their lead after the restart on the back of an early 9-0 burst and some key stops at the defensive end.

It was Dora Cipcic — back in the Eagles’ starting five — who halted that dangerous run and a Jessica Eadsforth-Yates triple reduced the deficit to single figures.

But Jones’ well-drilled roster reset and came back stronger with Erika Williams a constant thorn in the home side’s defence.

The Californian forward finished the first half with 11 points as Mystics took a 42-30 lead into the locker room.

And Newcastle needed to find a way to limit the 27-year-old’s threat in the paint with the all-action US star increasingly influential at both ends of the court.

Ultimately, a difficult situation only got tougher for the hosts after the restart as Georgia Jones and Vanessa Akra joined Williams in double figures.

Both sides were shooting close to 50 per cent from the floor but Manchester were putting up a greater number of shots and getting more good looks as the visitors doubled down on their first half advantage.

McVicar, who finished with 19 points, had the chance to reduce Mystics’ lead to single figures only to rim out from three-point range.

And within the blink of an eye the visitors had opened up an unassailable 22-point lead.

Gaynor couldn’t hide her frustration at the prospect of another winnable fixture slipping through the net — the furious centre picking up a technical and her fourth foul of the game seconds before the third quarter break.

Any hopes that fatigue might adversely affect Manchester down the stretch quickly evaporated as the visitors stayed focused and disciplined in the face of some late Eagles pressure.

And nothing less than back-to-back wins against Gloucester and Durham next weekend will reignite Newcastle’s season.