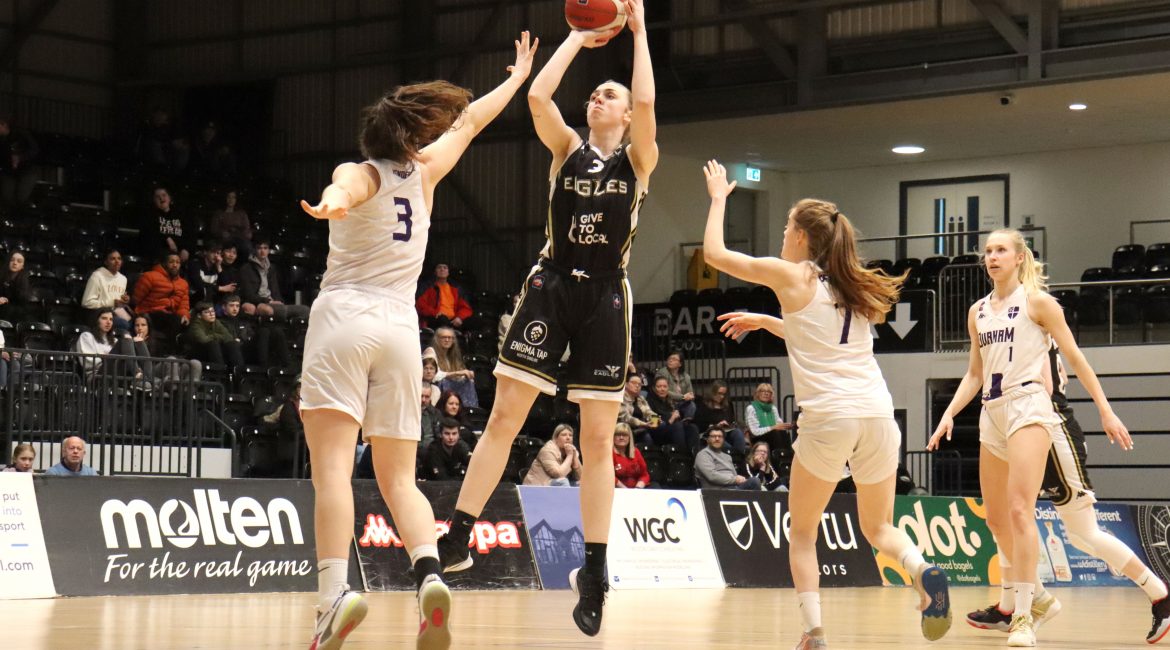 Heading into a high-pressure homecourt double-header, nothing less than back-to-back wins were required to keep Noelia Cacheiro’s side on course for a top eight finish.

And after dispatching Gloucester City Queens on Saturday, a resurgent Newcastle finished a fabulous 48 hours in style by defeating shellshocked Durham.

Arguably the most impressive Eagles’ performance of the season was paced by the unstoppable Chloe Gaynor on a career night for the do-it-all centre.

But on a night when four Newcastle stars hit double figures, Layne Murphy bagged a second double double of the weekend with 12 points and 10 boards.

And the absence of crowd favourite Dora Cipcic, who picked up an ankle injury against the Queens, mattered little as the disciplined Eagles dominated from start to finish.

Gaynor returned to the starting five after being benched by coach Cacheiro the night before.

And Newcastle’s influential centre looked like a player with a point to prove as she tore into the Palatinates from tip-off.

Gaynor came out fresh, focused and full of running as she used her height advantage and fresh legs to dominate under the glass.

But the busy Eagle was well supported by her consistent captain as Marina Fernandez hit four early points to underpin a 10-2 Newcastle lead.

The Herculean effort required to beat Sheffield at the death just 24 hours earlier appeared to be taking an early toll on Durham.

And the home side clearly sensed their opportunity to lay down a marker — a coast-to-coast charge from Ruth Thornley setting up Maddy McVicar for the easy score that fired Cacheiro’s side 19-11 in front.

The Eagles led 22-13 at the quarter break paced by Gaynor’s nine points and five rebounds.

Durham, meanwhile, faced the restart without Abby Lowe after the former Newcastle favourite picked up her second foul inside the first 10 minutes.

And the Palatinates struggled to regain their intensity after the restart in the absence of their all-action mid-season signing.

A Fernandez two extended the Eagles’ lead to 30-19 midway through the second period but it was Gaynor who continued to do the damage against an unusually disjointed Durham.

The 23-year-old played all 20 first half minutes and a phenomenal return of 15 points, eight rebounds and two assists was the difference as the two teams headed to the locker rooms.

The Palatinates trailed by eight points at the break but Lee Davie’s side had overturned a 16-point half-time deficit to defeat Sheffield the previous day.

And Newcastle knew there was still work to do to complete a weekend win double with Lowe back in the game and Durham determined to keep the derby alive.

It was McVicar who suddenly ignited after the restart as the US star hit nine early points to keep the Palatinates at arm’s length.

Gaynor soared to her double double with a 10th rebound of the night before back-to-back Murphy buckets opened up a 12-point Eagles advantage.

Davie was forced to call a timeout in a bid to check Newcastle’s momentum but Durham still trailed by 11 points with 10 minutes on the clock — despite Elle Hendershot’s heroic 30-minute double double of 14 points and 14 boards.

Any late nerves were settled midway through the final quarter as Fernandez sank a trademark triple to restore the hosts’ double-digit lead.

And the Eagles opened up their biggest advantage of the night moments later as Rachael Bland converted from the bonus stripe to fire her side 66-51 up.