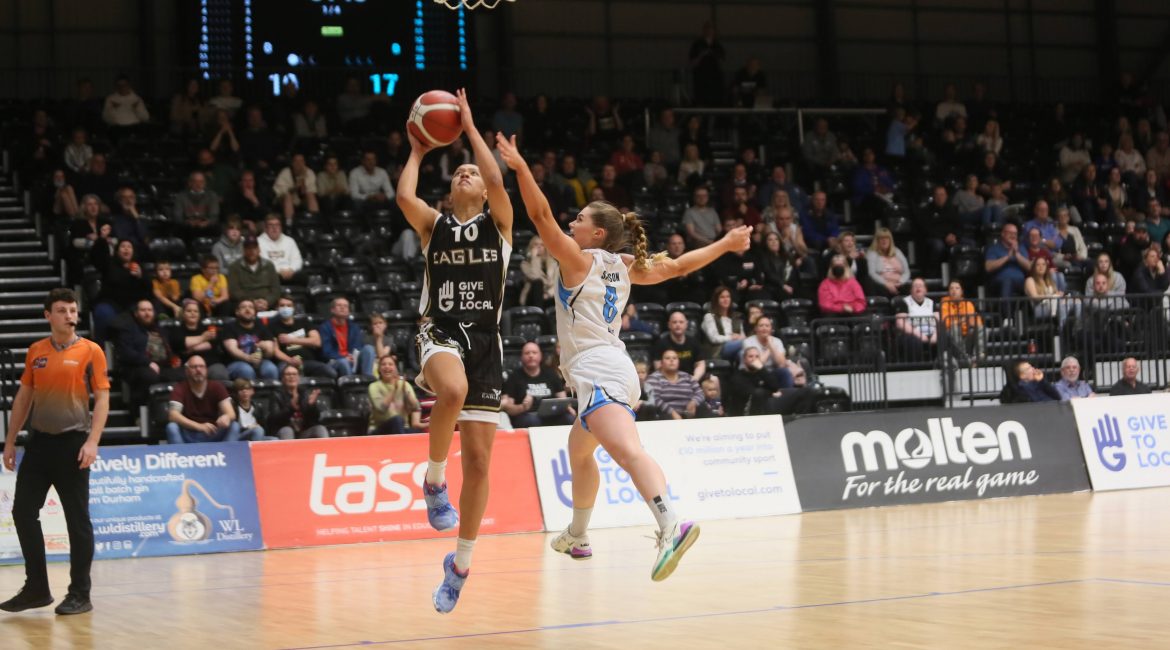 Previously winless Oaklands Wolves shocked pre-game favourites Newcastle Eagles as a record crowd for a WBBL fixture on Tyneside was left with little to cheer.

It was a sobering case of after the Lord Mayor’s show for Chris Bunten’s misfiring Eagles as the hosts failed to capitalise on last weekend’s eye-catching win double.

And it’s back to the drawing board for new-look Newcastle ahead of next weekend’s trip to Caledonia Pride.

The Wolves dropped 14 three-pointers on the disbelieving Eagles with Lizzy Harrison and MVP Merissa Quick combining for nine huge triples.

And Newcastle were the architects of their own downfall after missing nine of their 15 free throw attempts.

The Eagles went into their opening league game of the season without sidelined duo Courtney Clasen and Marina Fernandez.

And the sight of Abby Lowe limping off court late in the game, with a twisted left ankle, suggests last season’s injury curse could yet come back to haunt a luckless Bunten.

Not that Newcastle’s playcaller will be looking for any excuses after his fledgling roster fluffed its lines in front a frustrated Vertu Motors Arena crowd.

And the crestfallen Eagles can expect a soul-searching week of practice in the face of a lacklustre loss.

A rapid-fire start from the Wolves caught the hosts cold as a 13-0 Oaklands burst left Newcastle chasing shadows and chasing the game.

The visitors conceded the first basket before silencing the homecourt crowd with a combination of electric offence and no-holds-barred defence.

Wolves were doing to the Eagles what Chris Bunten’s side had done to the Pride seven days earlier.

And the indecisive women in black lacked cohesion, confidence and clear focus.

Oaklands’ stunning start was Quick by name and quick by nature as the Wolves’ centre made her presence felt in the paint.

The game’s standout performer proved too hot to handle for nervy Newcastle and took seven points and five boards into the first quarter break.

And the visitors’ accuracy from beyond the arc must have been a concern for Bunten with Wolves hitting four from nine from three-point range.

The Eagles, by contrast, were struggling to convert from a series of poor looks and looked a shadow of the team that had destroyed Pride and Durham Palatinates the previous weekend.

Only Ebony Horton, with 12 points in eight minutes, had threatened to cage the dangerous Wolves early on.

And it was the former GB Under 20 international, alongside floor general Maddy McVicar, who hauled the hosts back into contention with four-and-a-half minutes of the half remaining.

The latter’s two-point jumper reduced the deficit to four points but a feisty Oaklands outfit refused to buckle.

A 10-0 run to close the half put player-coach Lauren Milligan’s Wolves in total control heading into the locker room.

And opposite number Bunten will have gone into the break determined to derail Oaklands’ productive dribble offence and their deadly accuracy from downtown.

Alarmingly it was another towering triple, a second on the night for Eva Karasaite, that extended the Wolves lead seconds after the restart.

But Newcastle were finally winning the battle of the boards and putting their rivals under increasing pressure on offence.

And Bath Sarson moved to four fouls midway through the third period as the Oaklands’ guard failed to repel another well-worked Eagles attack.

McVicar had the chance to fire Newcastle in front for the first time since the opening five seconds as she made two quick trips in succession to the free throw line.

But the US star converted just one of her four attempts from the bonus stripe as the visitors took a 52-50 lead into the final period.

Missed free throws would come back to haunt the home team as the Eagles converted just 40 per cent from the foul line.

And it was that frustrating profligacy, coupled with a failure to stem the constant flow of threes, that cost Newcastle a first win of the WBBL Championship campaign.