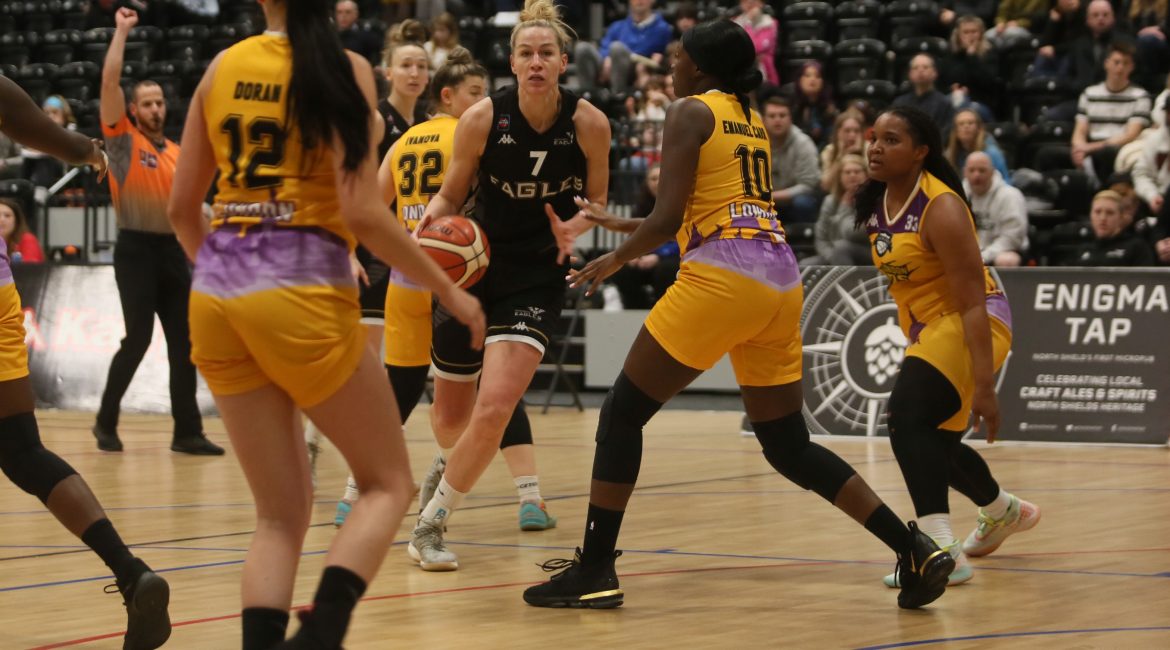 Newcastle Eagles moved to 9-2 in the WBBL Championship standings thanks to a shooting masterclass from forwards Georgia Orhdorf and Mante Kvederaviciute in their 64-49 win over London Lions.

Heading into the contest, the hosts knew that a win would continue to put pressure on Leicester Riders and Sevenoaks Suns, who sit first and second in the WBBL table.

It was the Eagles who got off to a hot start thanks to Orhdorf, who converted a number of early opportunities for Newcastle – with the Australian forward finishing the contest with 22 points.

The Lions, just could not match Newcastle’s rapid ball movement early on, with the hosts keen to show off their speed and physicality.

Orhdorf, along with German international Center Lisa Koop, could not be stopped, with the Eagles racing out to a quick 12-4 lead halfway through Q1.

Things were going comfortably for playcaller Chris Bunten’s side but unfortunately, his sides hot start was seemingly halted by London’s resilience.

While Newcastle controlled the opening period of the game, London came roaring back.

Having weathered the initial storm, the visitors managed to claw their way back into the contest thanks to some impressive work from guard Lana Doran.

Q2 began with London peppering Newcastle’s basket – with the visitors keen to continue their hot streak.

And their efforts were rewarded when Doran sank an outstanding three-pointer from way out-wide.

London had found themselves right back in the contest thanks to some good work on both sides of the ball, chipping away at Newcastle’s lead.

For all their early dominance, the Bunten’s side could not find the basket, with the visitors then taking their first lead of the game, curtesy of two Chloe Johnson free throws.

After multiple trips to the Lions redzone yielded no points for Newcastle, the hosts patience was finally rewarded thanks to Kvederaviciute, who converted a long-two pointer.

But time and time again, the Eagles had somehow fallen out with the opposition basket, with the hosts unable to convert pressure into points.

Thankfully for the home side however, they had Kvederaviciute on their side – with the forward netting from long range to give the Eagles a slender 25-24 lead heading into the second half.

The second half started much like the first, with Orhdorf continually punishing London whenever she touched the ball.

Q3 was a nervy affair, with both sides keen to ensure that the game did not get out of hand.

And while Newcastle did manage to pull away thanks to more good work from Orhdorf and Kvederaviciute to take a 47-39 lead, they were then brought back down to earth by the visitors, who again had clawed their way back into the game.

With the score sitting at 50-47 in the hosts favour with just over five minutes remaining, the conclusion of the game promised to be a nervy one for the home fans.

However, after going blow for blow with London for much of the second half, Newcastle began to ramp up the pressure on their opponents, with the hosts eager to show off their WBBL Championship credentials.

Having held a slender lead for most of Q4, Newcastle managed to open up an ten point lead over the Lions thanks to guard Rachael Bland, who netted a crowd raising three to effectively seal the game for the hosts.

And when the full time whistle went, it was Newcastle who moved to 9-2 in the WBBL standings, with the contest finishing 64-49 in their favour.