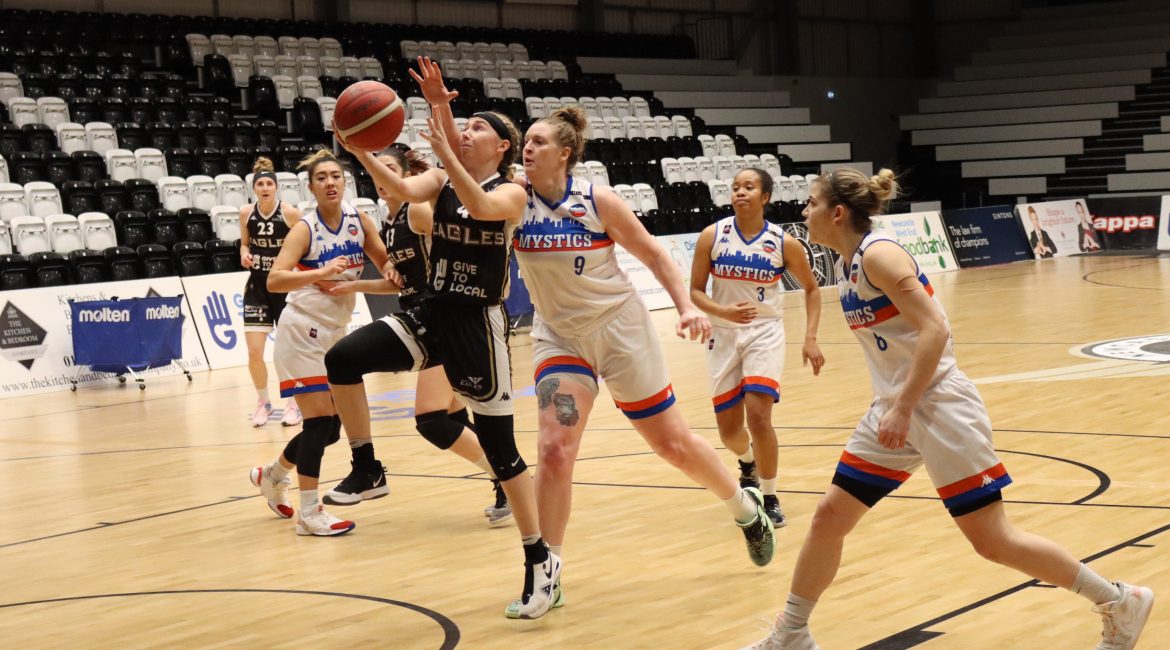 Newcastle Eagles have little time to reflect on a disappointing exit from this season’s WBBL Trophy as they focus on tomorrow’s Cardiff Met Archers revenge mission.

Chris Bunten’s side slipped to an agonising two-point defeat against the Welsh earlier this month.

And following last night’s heavy loss at the hands of Manchester Mystics, nothing less than victory in Cardiff will keep a stuttering season alive.

Newcastle had lost nine of their last 10 fixtures heading into a must-win Trophy tie.

But the Eagles were unfortunate to suffer defeat at the hands of title contenders BA London Lions on Sunday.

Season Tickets Renewal Deadline Extended To End of June
May 18, 2022

A stellar defensive stint proved Bunten’s side can mix it with the best when the mood takes them.

And in spite of a desperate run of form — featuring just one win in 2021 — Newcastle faced the Mystics with renewed confidence.

That confidence appeared horribly misplaced during a disjointed first half display which was in stark contrast to Sunday’s much-improved performance.

The Eagles were second to every loose ball, hesitant in transition and unable to capitalise on some weak Mystics defence.

Bunten could barely believe his eyes as the team that had pushed London to the limit five days earlier looked bereft of ideas and worryingly lethargic.

The hosts blew an early 6-2 lead to trail 15-8 with four minutes of the first period to play.

Former Team Northumbria forward Hannah Shaw might still be some way short of full match fitness but the veteran still had too much for Newcastle in the paint.

And Manchester were keeping Ali Gorrell’s hot hands away from the ball as the visitors keyed in on limiting the dangerous American on offence.

But for the second game running Eagles Academy product Ori Chukwu-Etu provided a rare bright spark for the hosts with another busy shift under the boards.

Newcastle reduced the deficit to four points thanks to a sweet Gorrell triple two seconds out from the first quarter buzzer.

But Manchester held the Eagles scoreless for the first five minutes of the second period as Jeff Jones’ side opened up an impressive 11-point lead.

Not for the first time this season it was down to Gorrell to haul her team back into contention and the former Sheffield star went to work to keep Newcastle’s Trophy dream alive.

The in-form guard hit a flurry of mid-period points to keep the Mystics keen but a Georgia Jones three on the half-time buzzer left the Eagles trailing by 10.

A challenging season was hanging in the balance with 20 minutes to play and Bunten was clearly becoming frustrated with his side’s failure to stick to the gameplan.

Manchester maintained their grip on the tie during a scrappy third period and it was only thanks to a late Abby Lowe burst that the hosts stayed in touch.

Even so, the Mystics took an 11-point lead into the final period and with five minutes to play Jones’ side were 20 points ahead.

Any pre-match optimism had evaporated as the clock ticked down on a poor performance.

And the Eagles head to Wales for Saturday’s lunchtime tip-off looking to bounce back from another dispiriting defeat.