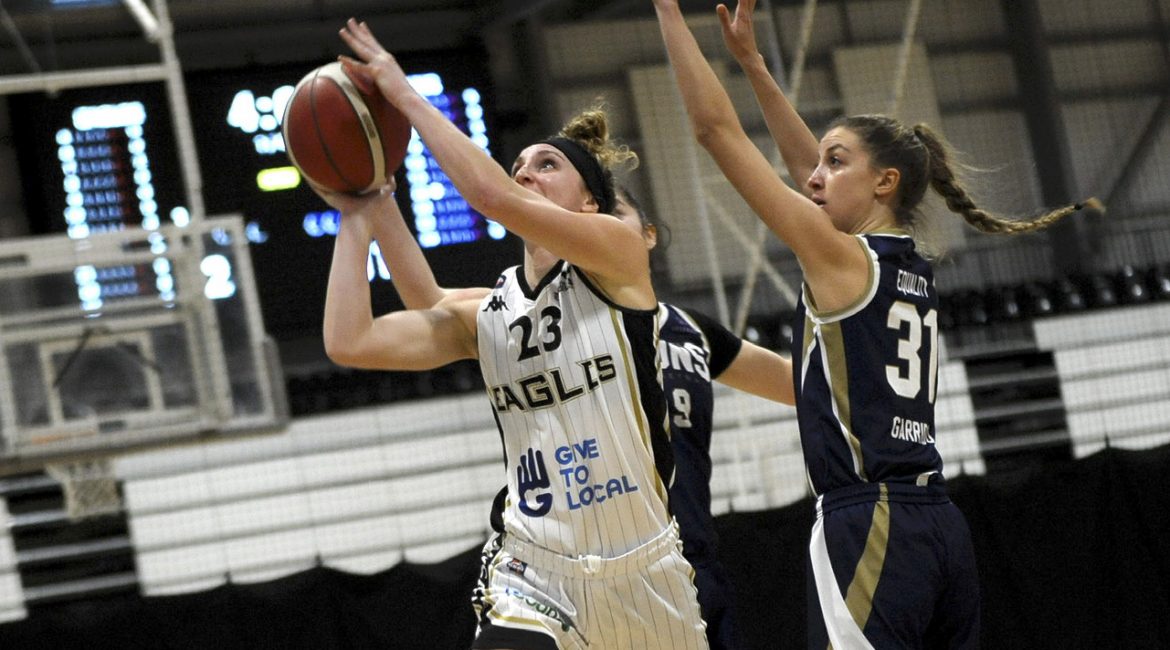 It’s back to the drawing board for Chris Bunten after a 0-2 start to the league season dented any early-season optimism on Tyneside.

Double defeat during a difficult opening weekend puts Newcastle Eagles WBBL on the back foot ahead of next weekend’s trip to London Lions.

And Bunten faces a Herculean task restoring confidence to a roster that still can’t find a way past perennial contenders Sevenoaks Suns.

Not for the first time, former Team Northumbria pair Cat Carr and Ta’Yani Clark ran the show against their former club.

But Bunten will feel frustrated that his short-handed team couldn’t make things a touch tougher for two familiar faces.

Carr led all scorers with an eye-catching 22 points, eight assists and five rebounds.

And Clark wasn’t too far behind as the veteran guard added nine boards and six assists to her 14 points.

On a night when no Newcastle player made a significant impact, backcourt pairing Ali Gorrell and Maddy McVicar struggled to recapture their early-season form.

The US guards converted just six of their 24 field goal attempts with Mante Kvederaviciute the only Eagle to hit double figures.

The return of the Lithuanian international off the bench was a rare positive during an otherwise punishing 40 minutes of WBBL basketball.

And Kvederaviciute’s 12 points in just 14 minutes underlines the forward’s importance to a team still searching for its identity.

Sevenoaks restricted Newcastle to just two points in the first five minutes and by the time Jorjah Smith halted an 11-0 Suns’ run the visitors were already firmly in control.

Carr and Clark combined for 12 first period points as the pair locked into their trademark offensive groove early on.

And the Eagles — coming off the back of a poor performance at Manchester the previous day — had no answer to a typically slick Sevenoaks outfit.

The hosts did manage to reduce the deficit to just six points heading into the second quarter.

And an Ori Chukwu-Etu steal and conversion seconds after the restart cut the Suns’ lead to just two points.

But that was as close as it got for Newcastle as Len Busch’s side regrouped and refocused to close the half 16 points ahead.

Carr already had 14 points and six assists to her name while Gorrell, by contrast, was restricted to just two points in the face of some stifling defence.

Things only got worse for the Eagles after the break and an impressive performance off the bench by Sevenoaks’ Irene Garrido-Perez hardly helped Newcastle’s cause.

The guard bagged 10 points and six boards in support of Carr and Clark as the visitors closed in on another big win.

And the Suns took an unassailable 25-point lead into the final quarter.

As the clock ticked down Bunten couldn’t contain his frustration and the Eagles playcaller picked up a late technical foul.

But an injury to Gorrell in the dying stages will be of more concern to a Newcastle organisation that needs its talismanic backcourt leader now more than ever following an unconvincing start to the Championship season.