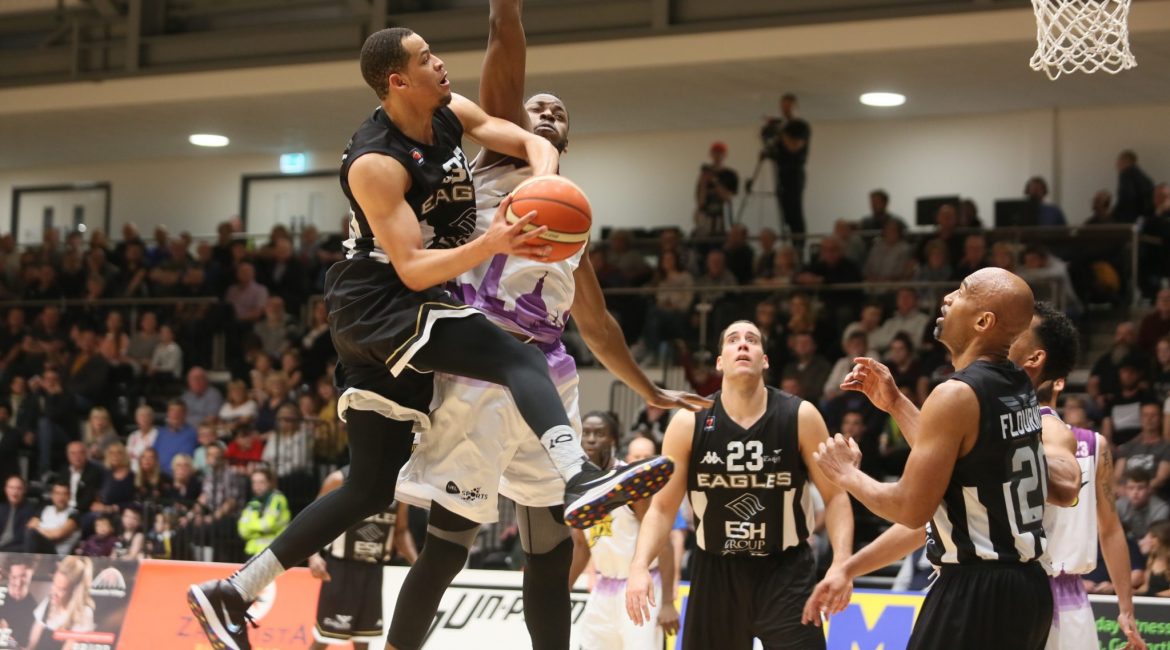 League titles have become synonymous with Newcastle during Fabulous Flournoy’s unprecedented reign as Eagles’ player-coach. The only disappointment tonight was the unfamiliar name on this season’s Championship crown.

That London Lions – and their abrasive playcaller Vince Macaulay – finally secured their coveted regular season prize in the North East left a sour taste in the mouths of the black and white masses.

But there remains one last chance to bring home a trophy to the Eagles Community Arena and decorate the club’s magnificent new base with the silverware it surely deserves.

By the time Newcastle tip off next Sunday’s playoff quarter-final second leg it is likely that big guns Darius Defoe and Jeremy Smith will be back to spearhead the Eagles’ Final Fours push.

But Victor Moses and Drew Lasker both limped out of a bruising encounter against the Lions and what should have been a relatively painless finale to the regular season – with nothing riding on the result for the hosts – suddenly looked like the ultimate in nightmare scenarios. Monday morning’s roll call could be interesting.

In the absence of so many key men this month, Flournoy, Rahmon Fletcher and Kyle Williams had found the kind of flow and rhythm that can make or break a post-season run. Forced to carry the extra load all three have excelled.

But tonight’s fixture looked like a match too far for a fatigued Flournoy. The proud New Yorker will have been desperate to make things as difficult as possible for old foe Macaulay but playing a combined 82 minutes in his previous two matches – including all 40 at Sheffield 24 hours earlier – was bound to take its toll. To his credit, the inspirational Flournoy still clocked up another 35 minutes and somehow hit 12 points.

Williams fared little better during a quiet first half and only Fletcher, who bagged a brace of early threes, looked likely to match the form that had seen the point guard plunder an eye-catching 65 points in his last two fixtures.

Newcastle’s two-time league MVP took 16 points into the half-time break but it was London who led by 10 with the influential Justin Robinson a constant threat on offence. A combination of the Lions’ superior inside strength – the returning Moses had managed just five first quarter minutes for the hosts before being benched – and a series of dubious calls from the match night officials saw the visitors seize control.

But homecourt fans couldn’t overlook the fact that the Eagles might still have been in touch had it not been for frustrating profligacy around the rim. Time and time again Newcastle – utilising their now familiar fast-break game – had engineered presentable chances only to miss a slew of easy lay-ups.

Given the hosts’ injury problems and a tough loss against the Sharks the previous night, London were always favourites to sweep their opponents. But the last thing Flournoy wanted was to hand the Lions an easy win and eradicating simple errors was the least the Eagles could do in the final 20 minutes.

Losing Fletcher three minutes into the third period was far from ideal and the champions elect swiftly extended their advantage to 20 points. Newcastle fans breathed a huge sigh of relief when their leading scorer returned to the fray at the start of the fourth quarter but it might have been more prudent to protect the Eagles’ influential skipper. With the game lost – London would never allow a late comeback a la Sheffield and Surrey – there was simply no reason to risk a frustrated Fletcher.

When Jamal Williams fouled out six minutes from time there was no coming back for the fast fading hosts but the Canadian’s premature exit at least allowed Themba Yabantu to make a welcome return from injury. And on a night when Macaulay and London lorded it over Newcastle it was a positive worth celebrating. Now for the playoffs.