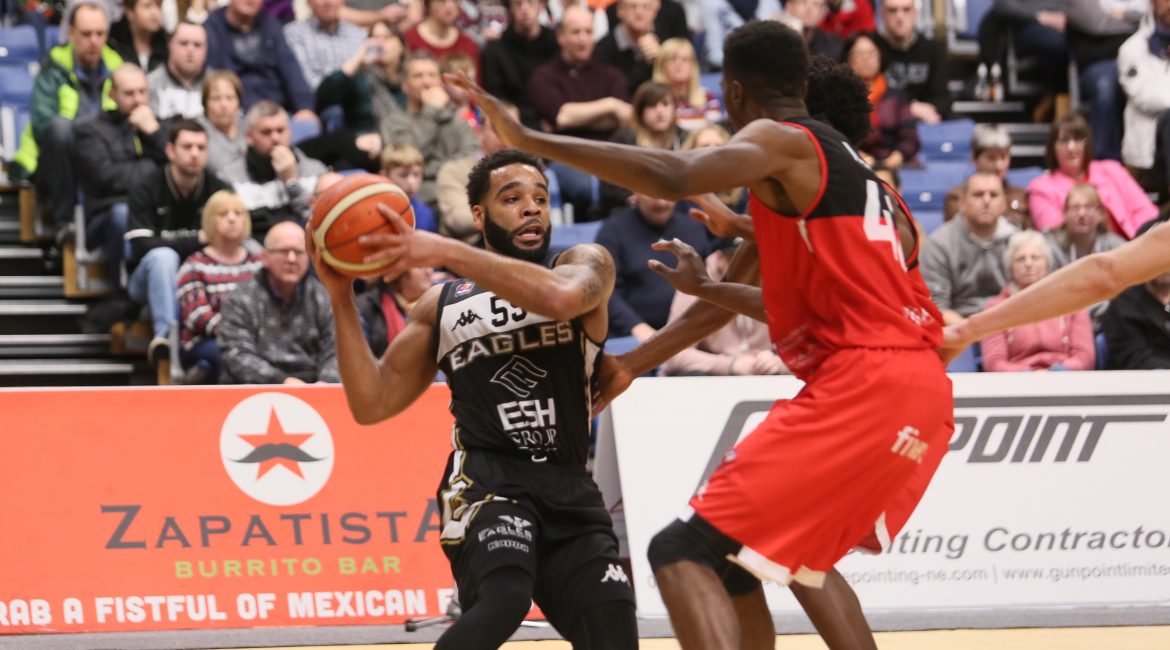 Christmas came early for Leicester Riders as the league champions stopped the BBL’s comeback kings in their tracks.

Newcastle Eagles’ luck ran out during the thrilling denouement to another dramatic final quarter as the visitors edged a bruising BBL battle.

And Fabulous Flournoy must go back to the drawing board during the holiday break after he watched a team in transition work so hard to pull off a remarkable win – only to throw away their chance at the death.

In reality Leicester have stolen a march on Newcastle since 2015: the Riders already boast their own purpose-built basketball arena and the East Midlanders won three of last season’s four domestic trophies.

Prior to last night’s rowdy showdown the Eagles had won just two of the last nine meetings between the sides – last season Newcastle were thrashed in both the BBL Trophy quarter-finals and the BBL Playoff final by a rampant Riders’ roster.

As a result Leicester arrived on Tyneside surely feeling they’d put considerable distance between themselves and Flournoy’s men during the last 18 months. This was their chance to prove the Eagles are no longer considered a serious threat.

Newcastle had it all to prove and an electric start gave the appearance of a team determined to prove the critics wrong. Leading 11-5 in front of the biggest Sport Central crowd of the season, the men in black were rapid in transition and pursuing every opportunity to penetrate a hesitant Riders’ defence. On the face of it the Eagles looked in control and on form.

Delve a little deeper and the real story revealed a team missing five in every six two-pointers throughout a strangely deceptive opening quarter. Flournoy will have taken no pride in a 21-19 first period lead as he watched his profligate players miss a golden opportunity to take Leicester to the cleaners.

For long periods of the first half Newcastle’s experienced player-coach – the subject of an in-depth New York Times feature this week – resisted the temptation to put things right from the floor, choosing instead to assess a potentially serious situation from the sidelines. But with two minutes to play in the second quarter – and his team trailing 33-29 – the veteran forward was back in the game. It was a brave but ultimately ineffective move.

Even Flournoy couldn’t halt Leicester’s stealthy progress and a Shane Walker triple on the half-time buzzer fired the visitors into a 10-point lead. It was all the Eagles deserved as a diabolical shooting display – the hosts converted a meagre 28% of their first half attempts from the floor – finally caught up with a team treading water.

Nobody expected the Riders to capitulate in the same way so many teams had done at Sport Central earlier this season. Not least Flournoy. In his pre-match programme notes Newcastle’s talisman conceded ‘Leicester are not the sort of team you can give a head start to and expect to pull back’. And when the influential Zarko Jukic limped off court just three minutes into the third period, the homecourt faithful must have feared the worst.

Of even greater concern was the fact that Saah Nimley had failed to sink a single basket after 25 minutes as the Riders successfully shut down the BBL’s second best scorer.

The visitors took a 62-54 lead into the final quarter and even Zukic’s return did little to assuage a growing sense of apprehension. Nimley returned to the floor but remained scoreless until an arcing three opened his account with seven minutes on the clock.

As the spark for a revival, a stunning shot ticked all the boxes and when the point guard’s backcourt partner, Jaysean Paige, dunked his team into a 77-74 lead with less than a minute on the clock yet another comeback was on the cards.

But Leicester hit back to prove Flournoy right. And prove this will be a long, hard campaign for the unconvincing hosts.