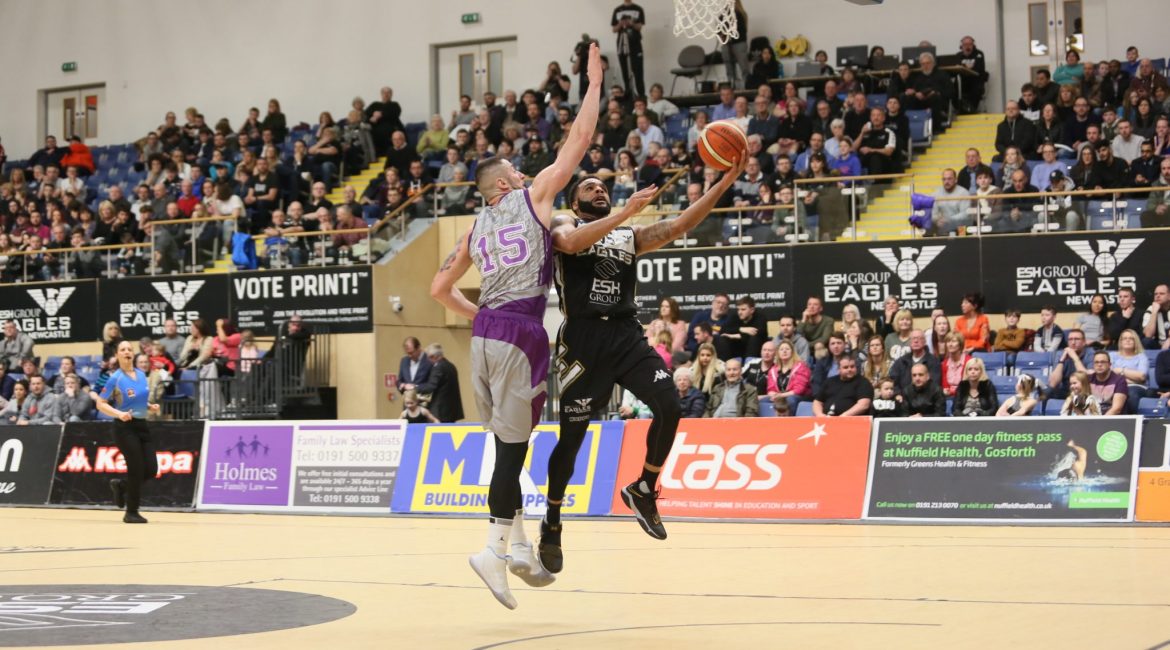 The BBL fixture list can rarely have been kinder to Newcastle Eagles.

As the under-pressure hosts sought to arrest a three-game Sport Central losing streak, who better to face than a Leeds Force team with one win in 21 in the league this season?

A side beaten by 88 points on their last visit to Tyneside. And a club that’s already used 23 players in a bid to find that elusive winning formula.

The Force limped up the A1 lacking quality, continuity and any conceivable threat. In fact, the only thing Leeds have in common with Newcastle is a shared sponsor.

From the tip this was a mismatch in the cruellest sense of the word. And that was in spite of Newcastle still shooting well below 50% from the floor during a first quarter that also saw the worrying withdrawal of skipper Darius Defoe.

The hosts leapt into a 9-0 lead and extended their advantage to 15 heading into the second period: on the face of it this was a walk in the park for the most decorated BBL franchise of the last decade.

However, the cracks that had appeared against Sheffield, grown wider against London and split wide open during a 100-83 homecourt defeat to Cheshire, were still in evidence.

Had almost any other BBL side rocked up at Sport Central last night then they would have made the Eagles pay for missing too many open looks, too many defensive assignments and too many big men in the paint. That the hosts were in complete control even without Defoe, Danish international Zarko Jukic and the departed Terry Martin said it all about the Force – so much weaker than their name suggests.

What immediately amounted to no more than a training exercise did, of course, offer Fabulous Flournoy’s fringe players an invaluable opportunity to get competitive court time under their belts.

And of the benchman pressed into service early on it was maverick Croat Jure Gunjina who initially made the most of a rare chance to start for the men in black.

A player with bags of talent and a good deal of experience has so far failed to fire on all cylinders in a Newcastle vest. Nobody is quite sure why.

Gunjina is a tough competitor, a tireless worker and boasts a terrific inside/outside game. During pre-season the 6ft 7in forward looked like the real deal but it’s been a difficult journey since for the former Georgia Southwestern star.

A double figure first half haul – albeit against a lacklustre Leeds – hinted at Gunjina’s obvious potential but even as the Eagles extended their lead to 30 points midway through the third period his influence began to wane. The enigma remains unsolved.

Elsewhere the busy Williams brothers did their best to fill the gap vacated by Defoe but the fact that Leeds had matched their hosts rebound for rebound heading into the final period proved Newcastle have serious problems in the paint.

Flournoy chose to sit out what was always going to be a comfortable win but he was exactly what the hosts were missing for much of the match: the New Yorker would not have allowed Leeds so much uncontested ball under the basket.

A combined 57 points for backcourt duo Saah Nimley and Jaysean Paige at least pointed to an offence still capable of keeping the Eagles in the top four mix.

But if the fixture list had been kind to the Eagles then the fixture was not: Defoe’s injury will feel like a crippling defeat if an iced left knee reveals a more serious long-term injury.