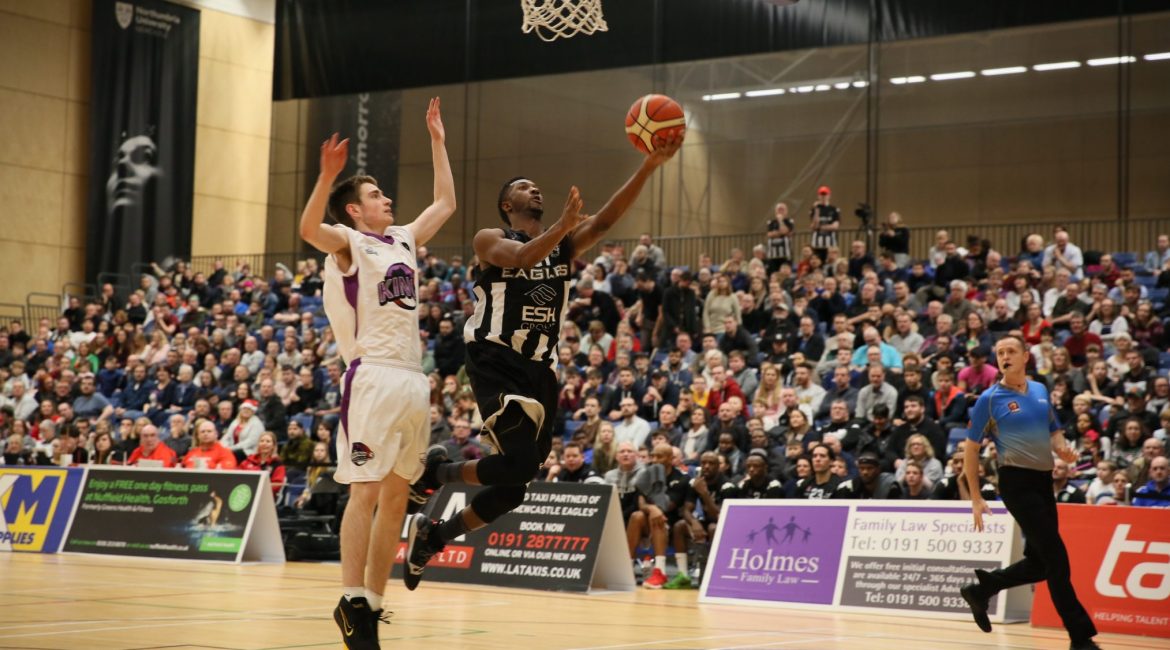 Christmas came early for Newcastle Eagles tonight as the club bade a fond farewell to its home of the last eight years with a big BBL Trophy win.

Edinburgh’s Kings came bearing gifts in the shape of lax defence and visible first half nerves.

And Newcastle made the Scottish minnows pay with a destructive show of offensive power – claiming a comfortable 129-59 victory.

The Eagles still require some much-needed New Year resolution following a worrying run of results in the BBL Championship.

But at least Fabulous Flournoy’s men head to Leicester on Friday in the winning habit following four successive losses on the road.

And the men in black will hope a change is as good as a rest ahead of their move to the brand new Eagles Community Arena next month.

But 2019 will see the club play out of their own state-of-the-art facility in the West End of Newcastle.

And this was a fitting farewell to a venue that became synonymous with success during the first five years of the Eagles’ colourful tenancy.

Within 10 minutes the hosts had posted 34 points with eight Newcastle players on the scoreboard.

Edinburgh, by contrast, failed to hit double figures in the first period as the gulf in class between the BBL heavyweights and their Scottish opponents became glaringly evident.

Eddie Matthew, who is qualified to represent the Scots at international level, made the most of rare first quarter minutes to hit five points in the final minute of a one-sided opening period.

And the homegrown hero – a product of Morpeth Basketball Club – led all scorers with 19 points midway through the second quarter.

Matthew barely missed a basket as he rained down twos and threes at will against opposition unable to handle the versatile guard.

But this was a night when several Newcastle stars would fill their boots and six players had hit double figures by the time the final buzzer sounded.

The Eagles took a 73-26 lead into the half with Flournoy using the opportunity to rotate his bench and build some much-needed confidence.

And the only downside to an otherwise perfect Sport Central send-off was an injury to Newcastle’s influential playcaller midway through the third quarter.

Flournoy fell heavily and stayed down for two minutes before gingerly hobbling off the court and ending his game early.

And it remains to be seen whether the 45-year-old – who battled back from a serious ankle injury earlier this year – will play a part against the Riders later after Christmas.

Regardless of whether Flournoy pulls through, Leicester will pose a very different test to the inexperienced Kings and the veteran New Yorker has talked about the need for his players to deliver consistent defence and step up the plate.

With five league defeats to their name already this season, the Eagles can ill afford another reverse in the East Midlands ahead of their first clash at the Eagles Community Arena on January 11.

But a focused finish to a professional performance – with Matthew celebrating a game high 24 points on the back of 81 per cent shooting from the floor – was cause for measured optimism.

And Newcastle’s fans left Northumbria University for the final time believing the good times can return to a team and a franchise in transition.

Tickets for the first game at the new Eagles Community Arena are on sale now: