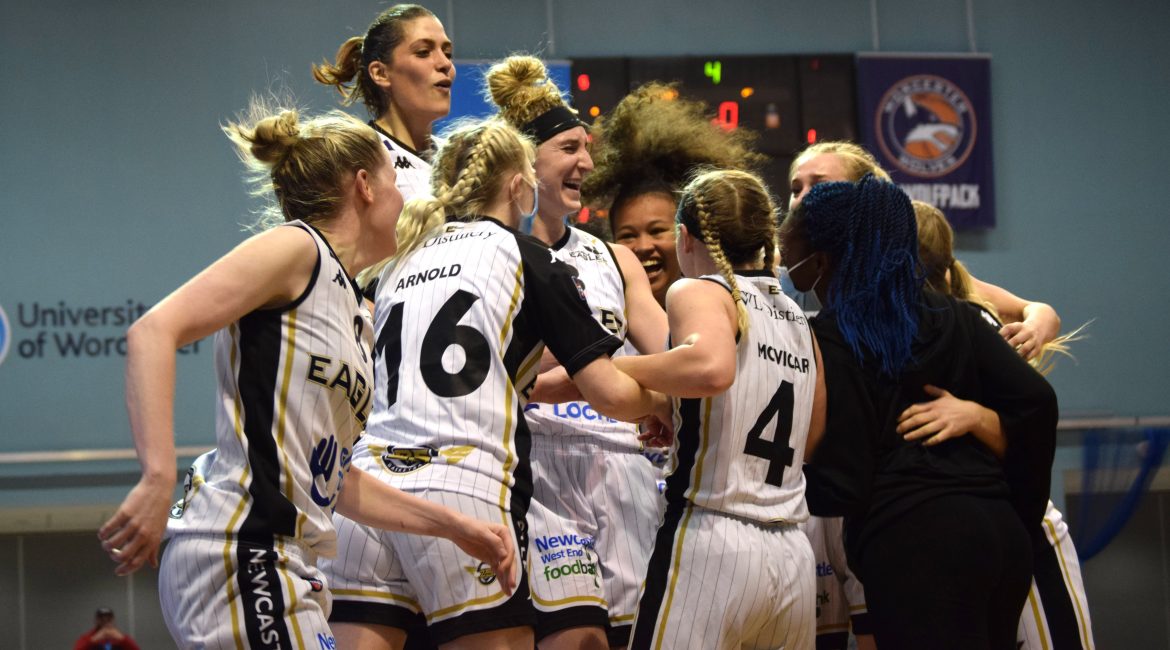 Ali Gorrell wrote the latest chapter in Newcastle’s fairytale finish to the WBBL campaign with the titanic triple double that fired the Eagles into the 2021 playoff final.

The league MVP contender added 10 assists and 11 rebounds to her game high 22 points as league champions Sevenoaks Suns were shown the door at this season’s post-season party.

And after claiming the biggest scalp of her glittering career Gorrell admitted: “It’s like my very own Cinderella story!

“It’s an absolutely awesome feeling. All of us are having so much fun and enjoying our basketball at a time when we never even expected to be here.

“We went into the playoffs with nothing to lose and now we’ve beaten Sevenoaks and Leicester in back-to-back games.

“We were down by eight at the half but we said that if these were going to be the last 20 minutes of our season then we’d make them count.

“And we did. We trusted in each other, started to relax and really took the game to the Suns.

“We’re so excited to be heading to the final. Nobody could have predicted this and we’re very grateful to finish the season with a shot at silverware.”

Gorrell was supported by 15 points — including five from eight three-pointers — from Rachael Bland as the veteran Wearsider rolled back the years.

And there were double figure hauls from Abby Lowe (20) and Maddy McVicar (18) as Newcastle — who had never previously beaten Sevenoaks — somehow upset the odds for the second time in seven days.

“I’m really trying to manage my emotions,” added head coach Chris Bunten as the playcaller reflected on the most significant win of his career.

“I sound like a broken record but I’m just so proud of my players.

“To knock off the number one seeds and to beat the best team in Britain is just phenomenal.

“I’ve had the pleasure of coaching Ali over two spells in Newcastle and she’s outstanding as a player and a person.

“What a weapon to have! The togetherness within this group is what’s got us this far and Ali is the glue that holds us all together.”

Basketball matches don’t come much tougher than Sevenoaks and the Suns went into yet another semi-final chasing a fourth successive playoff title.

The powerhouse of the British game went 11-1 in April to seal the WBBL Championship title.

And the Suns ended the regular season as the league’s leading three-point shooters and best defensive outfit — conceding fewer than 60 points per game.

Sevenoaks coach Len Busch was named Coach of the Month earlier in the week and the club’s captain, Cat Carr, was voted April’s best player.

In fact, every statistic pointed to a blowout win for the red hot favourites against a Newcastle team seeking another famous underdog win.

But the Eagles hadn’t got this far without fighting spirit and a gutsy start to the game epitomised the steely determination that had turned the club’s season around since February.

Newcastle took the confidence gained from toppling Riders into their semi-final and began the brighter of the two teams.

Both McVicar and Bland sank early threes to settle nerves and make a statement.

Suns trailed by two heading into the second quarter but it was Joyce Monakana who continued to pose the biggest threat to the Eagles’ playoff dream.

The multi-talented forward was everywhere heading towards the half and took 16 points and eight boards into the locker room — shooting four from five from beyond the arc.

Sevenoaks must have had one eye on the final as they opened up a 46-34 lead early in the second half.

But Newcastle weren’t done just yet and the Eagles launched a blistering 20-6 run to open up a 54-52 lead with 10 minutes on the clock.

Bland, Lowe and McVicar all poured in huge threes to keep the Suns at bay.

And Gorrell’s neat assist to set up McVicar’s shot brought up the triple double for the league’s leading scorer.

Gorrell and McVicar kept their cool from the bonus stripe in the closing stages to secure another momentous win.

And Bunten’s unstoppable side heads to Leicester next Sunday knowing impossible is nothing.