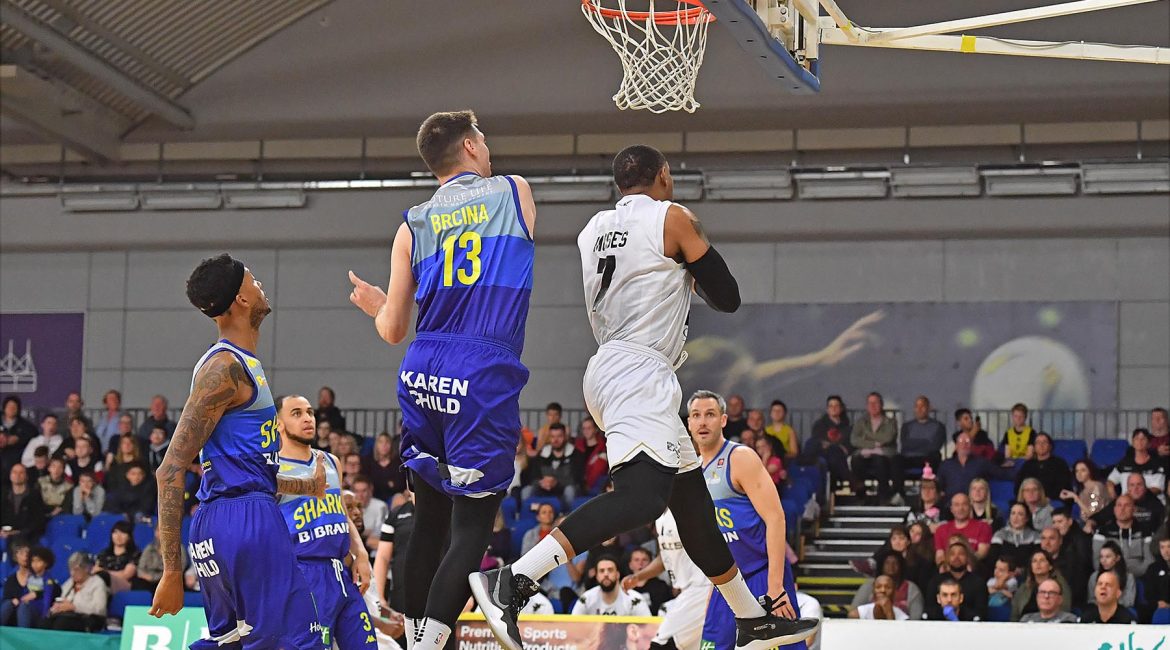 If ever the value of Victor Moses and importing the right goods in to the country needed to be emphasised for Esh Group Eagles Newcastle, last night in Sheffield more than confirmed it, writes Jeff King.

Boosted by a full roster for the first time in weeks the Eagles have given themselves a great chance to progress to the next round of the Play-Offs. But Sheffield will come North only five points down and with the belief they can still turn the tie around after what was a high-octane exciting first leg.

Newcastle were keeping Dirk Williams in check but Drago Brcina from the bench picked up the slack and with the visitors picking up early fouls helped his side to turn the deficit in to an advantage. But whilst Fletcher and Moses are in tandem and around Newcastle always have a chance.

They kept their side in a contest that ebbed and flowed throughout the first ten minutes with Sharks finishing the stronger and Brcina’s triple helping them to edge the first quarter by 25 – 21.

Smith though was the man with the answer and showed he was happy to be back on court as he combined with Kyle Williams for a strong Newcastle opening to the second period that saw them take the lead at 31 – 30 to force a Sheffield time-out.

Out of that break the home side initially came back strong and Dirk Williams’ 4-point lead put them back up by three. Once again though the Eagles big two Fletcher and Moses in particular powered the visitors back. Moses hit ten of a 12 – 5 run and turned the game around once again.

It was thrilling basketball with hardly time to draw breath and the first half ended as it had started with both teams’ level only having shared 100 points between them as Chris Alexander’s late drive sent the sides to the locker rooms level. Moses having an incredible 21-points at the half.

Unsurprisingly both teams slowed up a little as they came out for the second half and the third period proved to be a real battle royal between the combatants. Neither side could force home an advantage as they went back and forth at each other in a tough ten-minute quarter.

It was Newcastle that just sneaked it with the last basket of the period coming from another injury-returnee Darius Defoe which meant his side lead 68 – 66 with ten minutes left to play and what a ten minutes it was.

Newcastle went in front. Sheffield hit back but Fletcher in particular kept his side calm and just in front and deep in to the final period another typical left-handed drive to the basket gave his side their biggest lead of the night at 85 – 79.

Sheffield responded once more and closed to within one but Fletcher and Smith capped a final 7 -0 burst that was only spoiled by a late Sheffield bucket to leave the Eagles five points ahead with the second leg to come tonight.

Sheffield will look at the scoring and see they had six players in double-figures to the Eagles four but only Alexander really pushed Newcastle. The Eagles had double-doubles from Moses who added ten rebounds to his points tally and Fletcher who added ten assists to his and was only one rebound short of a triple-double.

So, a packed Eagles Community Arena awaits the sides tonight and Newcastle will be hoping for more of the same particularly from their adopted American Geordie contingent as the action gets underway at 5:00pm tonight.