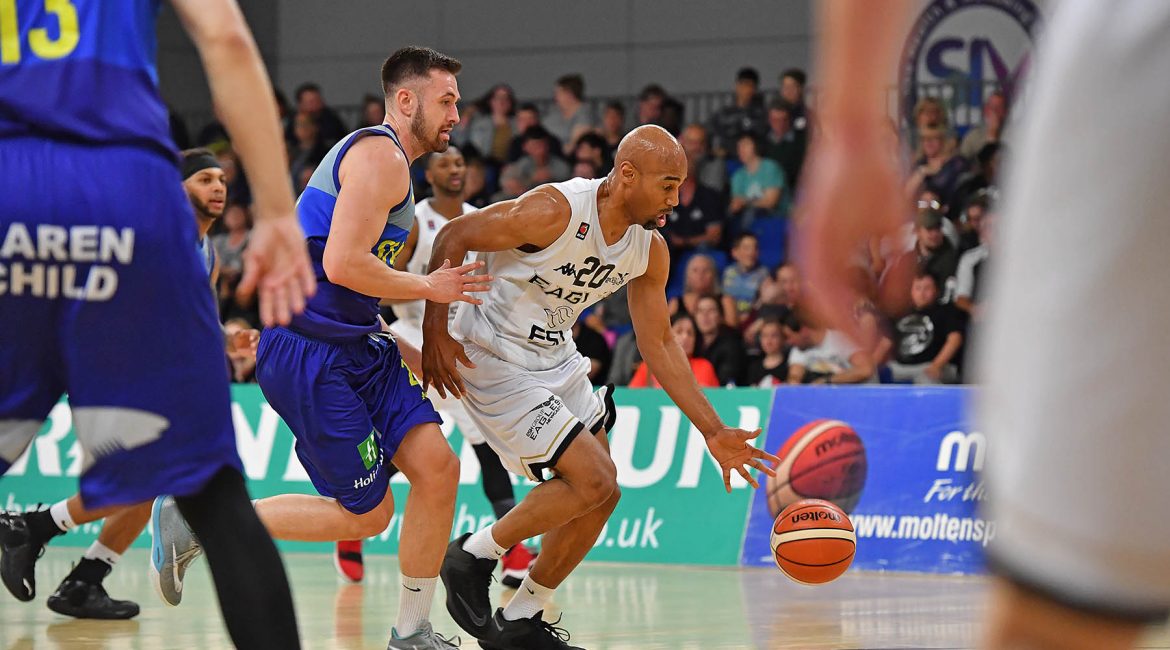 Unsurprisingly with little to play for in the regular season Esh Group Eagles Newcastle decided against risking any of their injured starters against a Sheffield Sharks side that needed to take the win to qualify for the end of season play-offs.

All of which meant a hard night’s graft for Fab Flournoy and his remaining roster as they slipped to a defeat which confirmed the Sharks play-off position for the 25th season in a row. The Sharks were led by Dirk Williams with 42 points as he was in unstoppable form all night for the home side.

The Eagles without big men Victor Moses and Darius Defoe were heavily out-rebounded with Rob Marsden in particular cashing in for the Yorkshireman adding 14 rebounds to his 20 points for a big double-double.

Newcastle did have their moments and especially when Rahmon Fletcher and Kyle Williams were in flow but despite a nice cameo from Eddie Matthew, the Eagles simply didn’t have enough firepower to cope with Sheffield’s heavy scoring.

It was the home side that opened the scoring and then went on to outscore the Eagles in the early going establishing a 2-to-1 advantage at 16 – 8 before Fletcher and Kyle Williams edged Newcastle back. Then came the run that opened the game up for the hungry Sharks.

A 15 – 2 surge with Dirk Williams netting 11-personal saw them take a 33 – 15 lead before a couple of Kyle Williams triples sandwiched a Kai Williams free-throw to cut the deficit to 33 – 22 as the first quarter ended.

That seven unanswered became fifteen as the second period unfolded and once again it was the hot-shot rookie Kyle Williams who was on fire as he netted two more triples and a deuce from the charity stripe. Eagles were back to within 3 all of a sudden and it was game on.

But big players make big plays and Dirk Williams and Chris Alexander have been that for Sheffield all season. They both added a couple of long-range bombs of their own as the game reigned three’s. That three-point gap stretched back thirteen at 45 – 32.

The rest of the half saw Newcastle steady the ship once again with Kai Williams and Eddie Matthew managing to help them shade the quarter by a single point as they headed to the locker rooms down by ten at 59 – 49.

Newcastle did manage to pull within seven on the back of a Matthew triple but a further 11-point home burst eased Sharks back in to the comfort zone as they once again pushed their lead up in to double digits ending the third at 85 – 68 ahead.

When Fletcher’s around for the Eagles though there’s always a chance and the point guard once again lifted his side to within seven points as the sides battled out the final ten minutes. But that was as close as the visitors got as Dirk Williams and Marsden once again responded for the hosts.

The lead got to twenty as Sheffield crashed the century mark and although Fletcher and Kyle Williams did score late on this one was in the books for Sheffield as they took a rare 3 – 0 season sweep against their opponents.

These two sides, depending on results elsewhere this weekend, could find themselves matched up in next weekend’s Play-Off first round but if they do the odds-on Newcastle’s roster looking somewhat different are very short indeed.

Before all that though Newcastle have to recover as best, they can in as short as space as they have as they go again tonight at The Eagles Community Arena. They end their regular season schedule with a huge game that could have a massive bearing on the destiny of the BBL Championship.

In town tonight are London Lions who will be looking to take advantage of the Eagles fatigue and missing players and pick up the one win they need to be crowned Champions of the BBL regular season. The action as always on a Friday night gets underway at 7:30pm and tickets are available online and on the door: