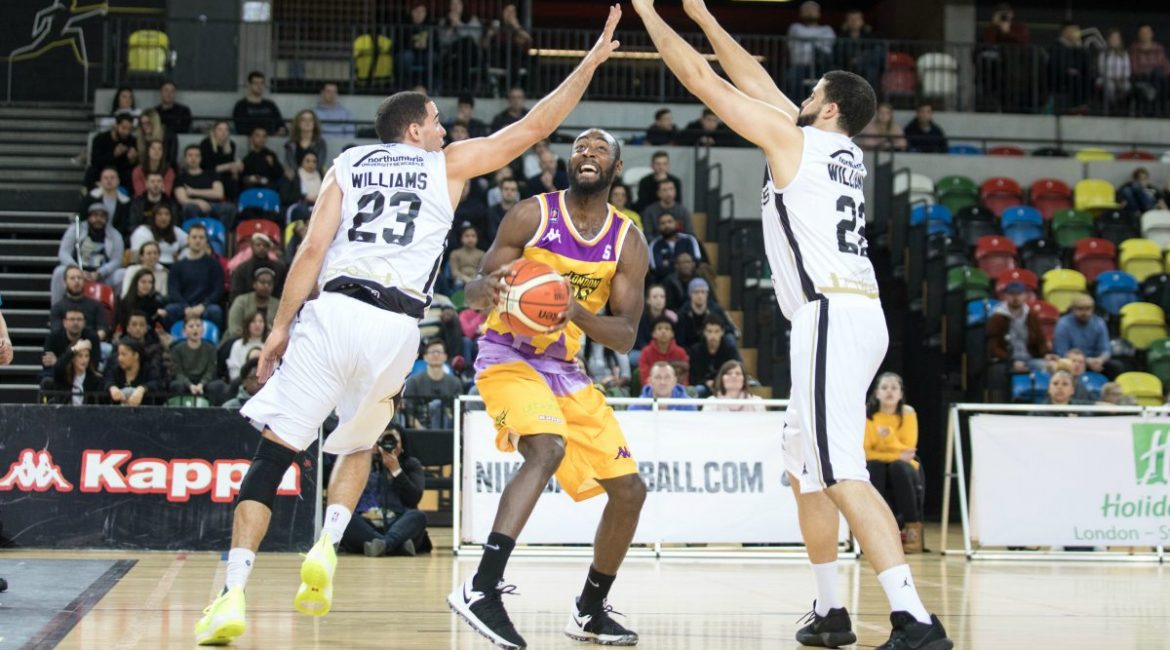 For the second night in a row through three quarters Esh Group Eagles Newcastle were right in the mix to pick up an important road win, writes Jeff King. But once again it was a final quarter that was ten minutes to far for the leg-weary Eagles who slipped to a third consecutive away defeat inside six days.

The opening five minutes saw both teams struggle to find any offensive rhythm or cohesion as the rims were rattled and the nets not swished with a series of missed shots at both ends.

The Eagles had opened the scoring with Jaysean Paige’s alley-oop pass to Zarko Jukic being flushed home with authority by the flying Dane before London slowly replied with a 6 – 0 run to establish an early lead.

Jure Gunjina was the man that stepped up for the visitors draining his first triple of the game to stop Lions run and bring his side back in to the game. From their it was a war of attrition as both teams were stopping the other with intermittent scoring leading to London shading the period 18 – 15.

The second, as far as Newcastle were concerned, was all about that man Gunjina. Eagles zone defence was causing London some problems and although they were moving the ball around well it was only when they got inside that any damage was done.

Coach Macleod’s men meanwhile looked as if they were going to die by the 3-ball until Gunjina got red-hot and after making three triples was fouled attempting another and knocked down all three free-throws to pull his side level.

It got better for the Tynesiders as Jamal Williams put them in front and three times they edged out to a six-point advantage until a late London basket took the side’s in to the locker rooms with Newcastle holding a 40 – 36 advantage after a big second period.

The second period opened with a Saah Nimley triple that pushed the away side up to a seven-point advantage but that was as good as it got for an Eagles side that are now looking in danger of being challenged for second spot.

London came back gradually and were particularly impressive inside with Cory Dixon in dominant mood. They regained the lead at 48 – 47 and looked as if they might pull away but Jukic pulled a dogged Newcastle side back as they just about hung on to their hosts.

However, that grip was pulled away from them as Lions came roaring out in the final period and with Gunjina drying up and no-one else picking up, the Eagles dried up on offence and then completely fell away defensively.

Time and time again London got inside and a crushing 18 – 2 run including 15-points in a row meant that in the space of five minutes Newcastle’s hopes were well and truly flattened and it was suddenly all over.

The final five minutes of the game was merely an exercise of Eagles fighting for pride under legs that were showing the exertions of a heavy week’s work. For the third time in that period they ended up conceding 90+ points which is a worrying sign for a side that normally prides itself on offence.

Just as importantly London take the league series 2 – 1 with this win and that could make a difference in the final standings as both sides look to find a high seeding place for the play-offs.