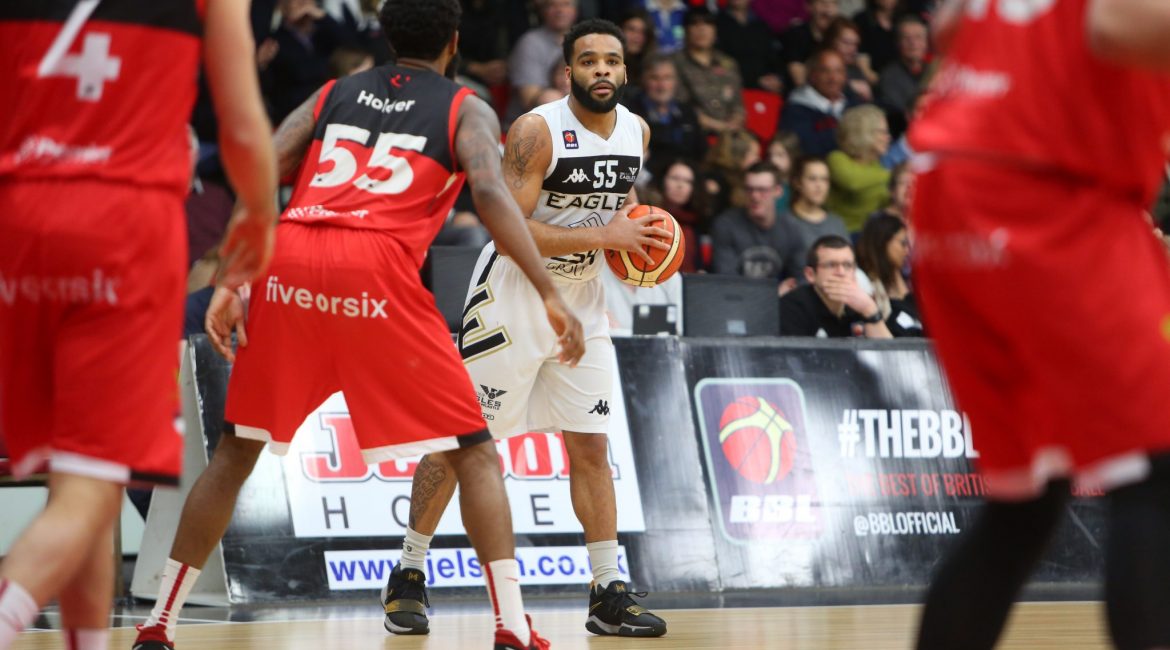 An Eagles side once again shorn of the services of Fab Flournoy both as a player and on the side-lines as Head Coach were also without Assistant Coach Dave Forrester meaning Ian Macleod was asked to step-up in to the top spot and he almost masterminded a sensational win.

Indeed, when Jure Gunjina made a 2-point lay-up with 7:41 left on the game clock the Eagles led by six at 71 – 65. It was then that the tiredness of a shorthanded roster took its toll as Leicester went on an 18 – 0 run over the next 6-plus minutes to completely turn the game around.

The visitors who had led by eleven at the half and even by twelve during the 3rd quarter were powerless to do anything to stop the Leicester surge and, in the end, undeservedly had to take a 12-point loss as the final buzzer sounded.

It was cruel on a Newcastle side that played so much better than they had on Sunday down in Surrey. They showed a lot more spirit particularly in the opening twenty minutes of the game.

Their unfamiliar zone defence enforced due to being down four forwards was starting to look a lot more solid. They were contesting every shot and rebound as though their season depended upon it which in many ways it did.

Jaysean Paige who had been uncharacteristically quiet in the last outing had 14 points by the half and with Saah Nimley also providing solid support an unlikely Eagles win had been on the court until those last final fatal minutes.

Leicester had opened the game well, but Eagles fought back well and with Paige in the mood had opened a 25 – 17 lead before Rema Lascelles heaved a “hail Mary” shot from inside his own half to cut the gap to within five after the first period.

Newcastle were being resilient and taking everything Leicester could throw at them. Deep in the second ten-minute stretch the home side cut the Eagles’ lead to three points and Macleod called a time-out.

He rallied his side and they came out of that team talk in determined mood closing down their opponents and ending the half on a 9 – 1 run to take that eleven-point lead in to the locker room.

Nimley’s early third period triple gave his side their largest lead of the night at 49 – 37. But back came Leicester again and their Captain Tyler Bernadini led by example. He exploded from beyond the arc dropping five triples in a blink of an eye to bring his side within two points.

Another great time-out call saw Newcastle once again show great fortitude and they ripped off an 8 – 0 run with Jamal Williams prominent to go back up by ten points and keep their hosts at bay.

The Riders though were back to within five at 66 – 61 by the end of the third to set-up their sensational final period where they completely burned out the Eagles fire and left the visitors flattened by their steam-roller of a run that took them preciously close to another BBL title.

For the Eagles, Paige was closed down in the second half and fouled out with almost four minutes to go whilst Nimley’s top scoring effort was all in vain as he lacked support for most of that final twenty minutes.

Somehow, some way though Newcastle have to re-group as they move on very quickly and must face a dangerous London Lions on their own court in less than 24 hours. On the evidence of the spirit they showed they have hope. Whether they have enough spring in their legs though is another big, big question.