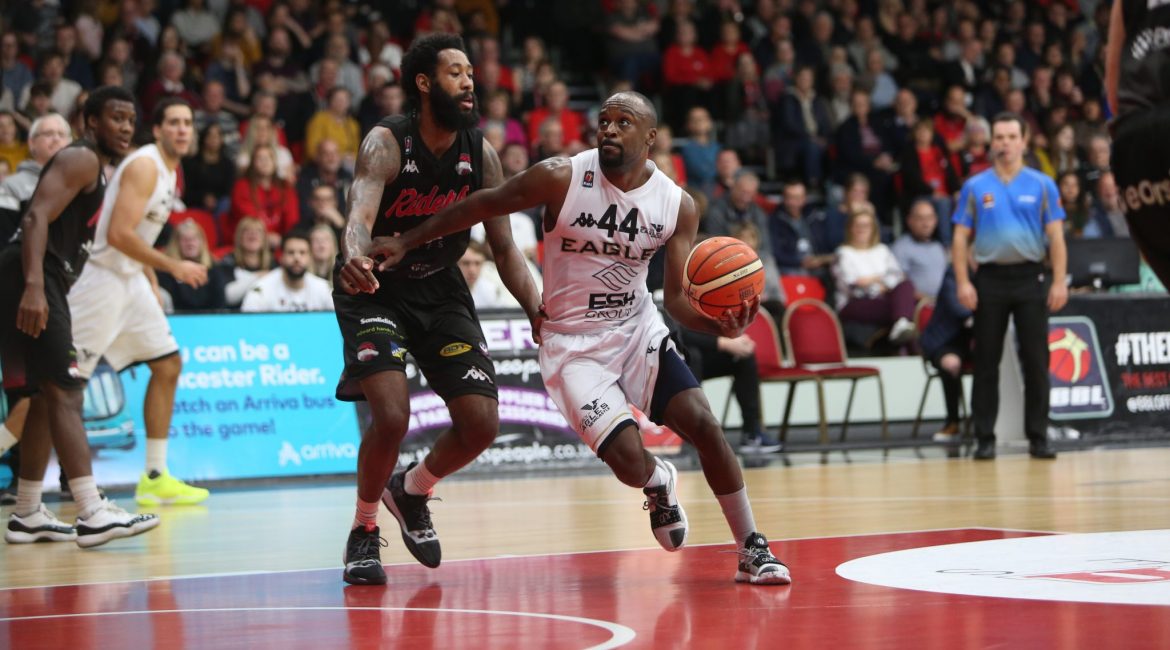 Esh Group Eagles Newcastle powered through to the BBL Cup semi-finals last night at The Morningside Arena, Leicester against deadly rivals Riders. Stand-out forward Victor Moses was the star of the show but once again he got great support from his team-mates and in particular Jeremy Smith and the emerging flourishing talented Kyle Williams.

It was a terrific first quarter of action and in particular a profitable last half of those ten minutes for The Eagles after a start when both these giants of British basketball slugged it out showing their abilities and taking the game to each other with high intensity.

Moses and Eagles point guard Rahmon Fletcher were leading the way early for their side but their every trust and parry was met by Riders coming back as the side went back and forth. Newcastle made the first break halfway through the first when a 6 – 0 run opened the first significant gap.

The visitors held the upper hand from there to take a seven-point lead in to the second period. Kyle Williams had netted the last basket of the first quarter and he scored the first two of the second including a triple to make it seven unanswered and the first double-digit lead of the game for Newcastle at 35 – 23.

Smith got in to the scoring groove as well as the normally reliable Leicester defence was being ripped to shreds. Moses who had 12-personal inside the first ten minutes added four more to lead all scorers and Fletcher also went in to double figures as the Eagles 1-2 punch kept them comfortably and deservedly in front.

At the half-time buzzer, Head Coach Fab Flournoy was the far happier of the two coaches as his side bounced in the locker room leading by an impressive 14-points, 49 – 35, giving his opposite number Rob Paternostro plenty to think and talk about with his struggling side.

Whatever was said seemed in the early going of the third to make little difference as the Eagles picked up where they’d left off in the first half and a 12 – 7 start with Moses and Smith again prominent saw them soar in to a 19-point lead and force a Leicester time-out with the home side down by their biggest deficit of 19-points at 61 – 42.

The time-out did finally spark a lacklustre Riders outfit and they had a ten-point unanswered run to close within nine points. Newcastle though regrouped, steadied the ship and limited the damage and took a ten-point advantage in to the final quarter.

That final ten minutes was about three things. Moses showing his finishing ability and Kyle Williams continuing his basketball growth meant the visitors always held control of the game and with veteran Drew Lasker and Fletcher controlling the game and pulling the games it became about running down the clock.

Leicester threw it all at Newcastle desperate to cut the gap but there was no panicking Flournoy’s side and they simply stood firm, did what they had to do particularly defensively where they were superb. As the final buzzer sounded it was a jubilant Newcastle side that celebrated with their loud and proud travelling support as they moved in to the BBL Cup semi-finals.