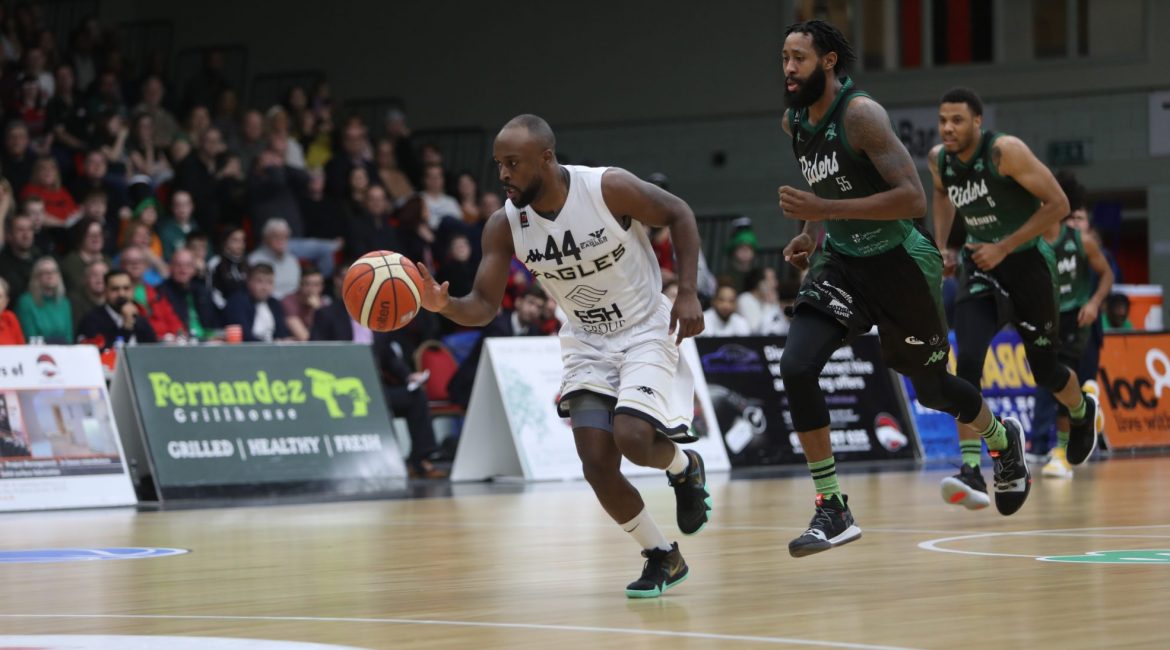 Statistically there was not much between Esh Group Eagles Newcastle and their hosts Leicester Riders at the end of a real game of attrition from two of the BBL’s most successful teams who always produce tough encounters.

But the important stat and the one that will hurt Eagles Head Coach Fab Flournoy and his players was the score-line in the final ten minutes of the game where Newcastle fell away under the pressure of a hard-driven home side.

Eagles had showed a lot of character and cohesion in the first three periods to not only stay with the Riders but actually take a five-point advantage in to that fatal last ten minutes. It was then that Riders raised the cavalry charge and took the final period 28 – 13 to seal an impressive win.

It was Leicester’s Jamell Anderson who opened the game’s scoring before Eagles hit back with four quick points to take a 4 – 2 lead. It was to be their only lead of the half as the home side hit back immediately with nine unanswered to lead by seven.

Newcastle’s 1-2 punch of V Moses and R Fletcher quickly replied to bring the visitors back within a point and although Riders still led there was little between the sides for the rest of the opening ten minutes with Fletcher netting the final basket of the quarter to peg back Leicester’s lead to 21 – 19.

Kyle Williams quickly levelled things up in the second with two free-throws before an 11 – 4 home run saw Riders surge ahead once again. But Fletcher and Moses continued to keep Eagles in the game and with Kai Williams also joining the party they cut back the home lead once again.

It was Kai’s triple as time wound down that meant the second period was shared between the two sides. This meant Leicester had the narrow two-point advantage at 40 – 38 as the team’s headed for the locker rooms after a typically tough well-matched battle between the two fierce rivals.

The Eagles opened the third in nice combative style and turned the deficit from the first twenty minutes around right at the start of the second twenty. Moses put them ahead with an And-1 play for the first time since early in the game and then Jeremy Smith took over.

The guard had been scoreless in the first two quarters but found his shooting boots in the third and his hot-handed efforts inspired his team-mates as he netted eleven personal inside that ten minutes. With the ever-present strong inside threat of Moses also significant, Eagles produced a 9 – 0 burst to take the lead.

It had looked as the teams went to the benches to prepare for the final quarter of the game that Newcastle were in the ascendency but it was not too be. Leicester are known for their toughness down the stretch and being able to pull games around late and this was no exception.

Their defence tightened the screw and forced Newcastle in to a lot of missed shots whilst they themselves became more efficient at the offensive end buoyed by the confidence of their defensive stands. It was two back-breaking runs that in the end made the difference.

An 11 – 2 start to the last ten minutes and then another 9 – 2 run almost immediately after suddenly had the visitors down by double-digits and with time running out, Eagles couldn’t rally and slipped to defeat. The loss puts them well behind league leaders London Lions as well as further behind Riders.

With Leicester taking the head-to-head in the season series it’s going to take some effort from Newcastle in what remains of the season if they are to break through and get in to the top two of the BBL.