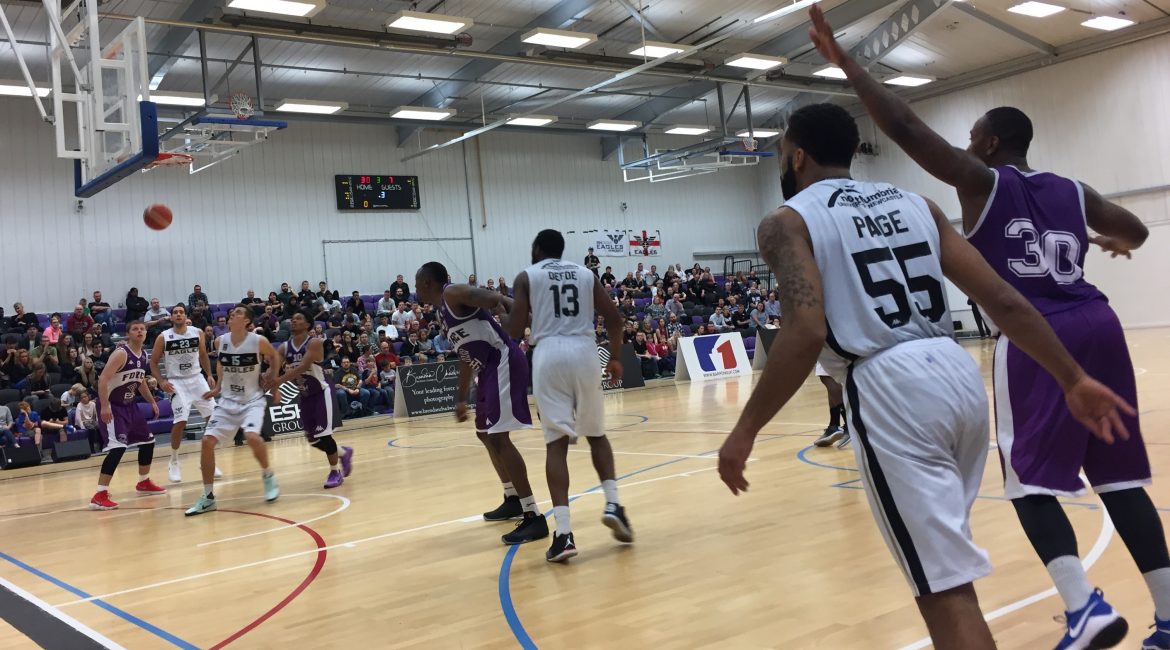 Esh Group Eagles Newcastle opened their BBL Championship challenge on the road in Leeds tonight, writes Jeff King. And what a sensational opener it was too as Fab Flournoy’s black and white warriors laid siege to Leeds’s doors and forced them down in some style.

As statements and markers go this must be one of the biggest and hardest given as Newcastle’s irresistible style where they combined superb aggressive defence with athletic transition and killer finishing all came together in some style.

The record books can be looked and ad digested and it’s doubtful that The Eagles have ever hit 148 points in a BBL Championship game but, records are there to be broken and recorded and at the end of the day the biggest and most important stat for Fab Flournoy and his team will be 1 win in the bank.

People will point out that the turmoil their opponents have endured as they prepared for the season to start and not having one of their import players available did make a difference.

The Eagles will concede those points to their battered opponents but then you can only beat what is put in front of you and this new style roster certainly did that and with some panache too.

The visitors were down early but once point guard Saah Nimley and his back-court partner-in-crime Jaysean Paige got in to their stride and rhythm there was only ever going to be one winner. Big Terry Martin also came off the bench in a scintillating first half to also raise double figures by the half time buzzer.

When that came Newcastle had torched their opponents to the tune of 69 – 26 and whilst there were still 20 minutes to play the destiny of the first BBL points were already well and truly in The Eagles Nest.

If the beleaguered home side thought that the half-time rest may have seen Newcastle slacken off they were very much mistaken. The Eagles simply swarmed, swooped and scored at will whilst in the process turning in a masterclass of defensive ability as an extra bonus.

By the final buzzer unsurprisingly they had no fewer than eight players in double figures with Paige and Nimley leading the way but their team-mates not playing a supporting role, merely a les starring one.

Paige had an incredible 81% shooting success rate and Nimley’s 27 points came at more than a point a minute in his 26 on court. Dane Zarko Jukic was an athletic force at both ends of the floor and had a double-double of 14 points and 11 rebounds.

Croatian Jure Gunjina was only one rebound short of joining him in the double-double club with Kai Williams and AJ Basi also joining in the fun and hitting double figures. But perhaps one of the most telling sights was Flournoy himself.

Only ten minutes played and clearly enjoying watching his side from the bench. He knows tougher tests will lie ahead and he will remind his players of that but for now it’s The Eagles who are very much up and running on the opening BBL weekend.