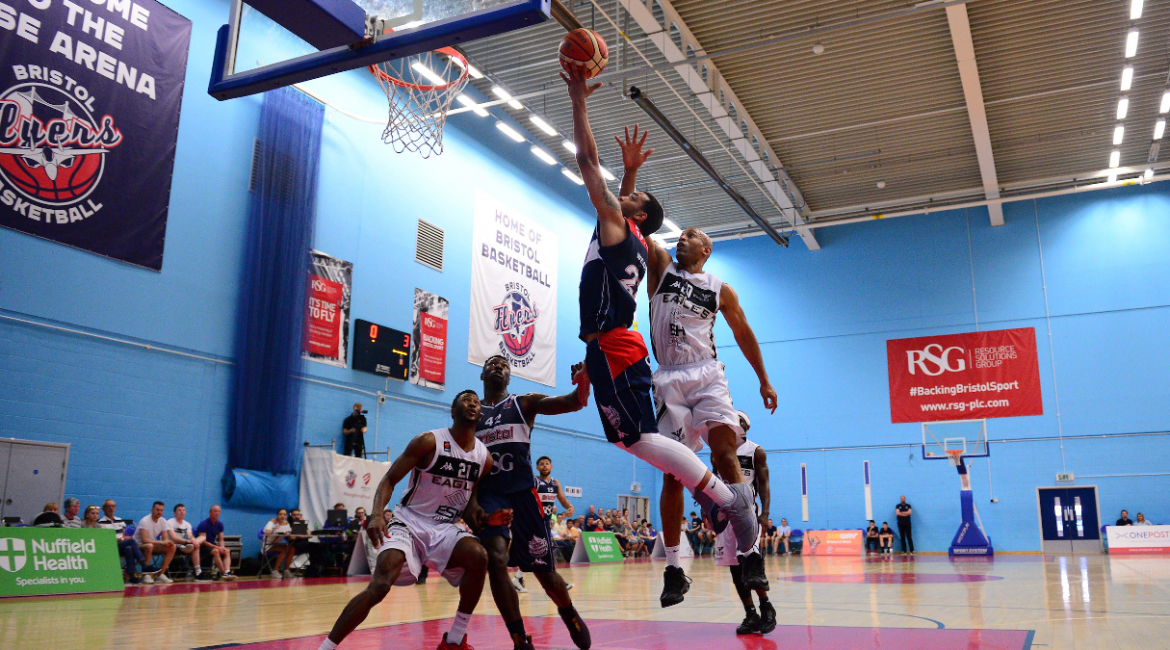 Esh Group Eagles Newcastle crashed out of the BBL play-offs in Bristol yesterday afternoon after another disastrous away performance in keeping with what has happened since the turn of the year, writes Jeff King.

Quite where the Eagles hierarchy go after one of the most disappointing seasons in living memory is open now to much debate. This was a Bristol side who they had beaten in all previous seventeen match-ups since the Flyers moved in to the BBL but the home side turned that around in dramatic fashion.

The Eagles injury jinx struck again prior to the game when Croatian forward Jure Gunjina who has been in the starting much of the last couple of months missed the game meaning Jaysean Paige returned to the starting five.

Paige though was quickly back on the bench picking up two personal fouls inside the opening minute.

With his back-court partner Saah Nimley also picking up an early one, the Eagles look disjointed at the start and Bristol more than halved the aggregate score with a 6 – 0 start before Darius Defoe finally got the visitors on the board with a couple of free throws.

However, Newcastle’s slow start continued but fortunately Flyers were unable to take advantage of it at first and Kai Williams made Newcastle’s first field goal with over four and half minutes on the clock.

Nimley then picked up his second foul and Eagles called a time-out to try and steady things. It didn’t have the desired effect and two Bristol triples from Jordan Davis twice cut the aggregate score to only four points on the night.

However the Eagles did finally get going with Defoe doing well inside and triples from the returning Paige and Zarko Jukic meaning they levelled the scores at 19 – 19 by the end of the first and still led by eleven overall.

Defoe put the Eagles in front on the night for the first time and they started to look more comfortable and in control of the game. Five quick points from Paige saw them move in to a five-point lead on the afternoon and sixteen overall forcing Bristol in to a time-out.

The time-out rallied the home side and they showed real determination and character to finish the half with an excellent 17 – 6 run turning the momentum back in their favour as they went to the locker room up six on the afternoon at 39 – 33 and only down five on aggregate.

In to the second half with everything to play for on both sides it was Flyers who picked up where they had left off in that second quarter to come out all guns a-blazing and an 8 – 0 start put them in front by three points on aggregate in the tie.

Eagles briefly rallied led by Captain Defoe who’s whole game performance certainly didn’t deserve him to be on the losing side but Bristol were now truly flying and Newcastle were struggling to contain them.

Paige and Nimley couldn’t get going at all against a tough Bristol defence which was in stark contrast to what they’d showed in Friday’s first leg. Every time Fab Flournoy’s men tried to rally Bristol had an answer and although the tie was close on aggregate the game wasn’t on the day.

Bristol hung tough going in to the crucial final ten minutes four up on aggregate and when Davis tripled again at the start of the fourth the lead overall was up to seven and Eagles were staring down the barrel.

Once again Defoe led the comeback and got his side to within two points but a fifth Paige foul with 8:33 to go left the visitors seriously short of additional firepower and although Newcastle did manage to tie the game on aggregate the tide had turned against them.

Deep in to the final few moments Newcastle had one last chance to close it but another Davis triple was the final dagger in to the Eagles hearts and a dejected looking set of players could only look on as their season crumbled on the final buzzer.