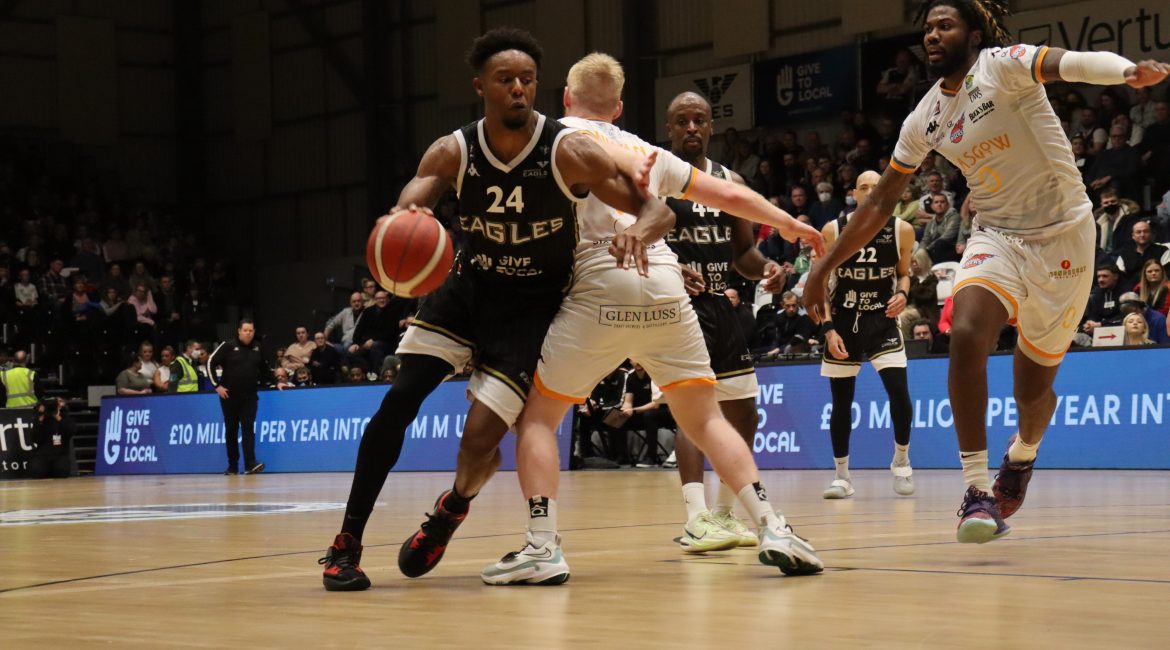 Justin Gordon’s fairytale return to Tyneside is gathering pace after the all-action American led Newcastle to a nailbiting 97-95 comeback win against Glasgow Rocks.

The men in black have won three games on the bounce after adding the in-form forward to a roster in serious need of a mid-season boost.

And Gordon’s 24 points, nine rebounds and five steals proved too much for Gareth Murray’s Glasgow as Newcastle defeated their fierce rivals for the second time in six days.

A Rahmon Fletcher two-pointer with three seconds remaining secured a tense victory in front of a capacity crowd — the Eagles skipper bagging a double double of 13 points and 15 assists.

And the hosts now boast a share of fourth place in the BBL Championship heading into the business end of the season.

The Rocks caught Newcastle on a roll the previous weekend as Wesley Person Jr paced the visitors with 22 points on the way to a 97-91 Eagles win.

Six of Ian MacLeod’s men punched double figure scores as a performance built on total team basketball propelled the men in black into the top five.

And a free scoring first quarter all but finished the fixture as a contest — meaning Newcastle could relax despite a late Glasgow comeback down the stretch.

Slow starts have cost the Eagles dearly this season time and time again but the Rocks had no answer to last Sunday’s stunning 39-point opening period.

And MacLeod’s men were looking for more of the same as they tipped off in front of another raucous crowd at the Vertu Motors Arena.

With the Sky Sports cameras in town, newly-confident Newcastle were keen to make an instant impression against their cross-border rivals.

And showman Gordon must have sensed an opportunity to add to his eye-catching highlights reel after muscling his way into the Eagles’ starting five for the first time since his much-heralded comeback.

Sure enough, Newcastle’s returning hero carried on where he left off last weekend with a dynamic start at both ends of the court.

Gordon bagged the first points of the game before snatching possession from the Rocks at the defensive end.

But Gordon’s team-mates couldn’t follow suit as that dream of another lightning start was swiftly dashed in the face of some fluid Glasgow offence.

Alasdair Fraser proved an irritating thorn in the Eagles’ side as the visitors’ roaming big man made his presence felt in the paint.

And even two early fouls for Jordan Johnson — back on court after missing the Emirates Arena clash between the two teams — didn’t faze a Rocks side running riot.

By the time the first period buzzer sounded, Murray’s men had turned the tables on stunned Newcastle to take a fully deserved 32-21 lead into period two.

But Glasgow and Fraser were far from finished as the well-drilled Scots continued to draw up the high percentage plays and finish with aplomb.

MacLeod was forced to call a timeout with four minutes and 25 seconds remaining in the half as the Rocks stretched out to a 14-point lead.

But that man Fraser continued to plunder buckets almost at will — the feisty forward finishing the half with 17 points off eight from 10 two-pointers.

MacLeod had work to do during the interval if the Eagles were to turn things around and bag a third win on the bounce.

And homecourt fans must have wondered why Gordon played just 10 minutes before the break in spite of that stunning start.

Reassuringly, the 2021 BBL Cup final MVP was back on court for the start of the second half — albeit following some serious stretching on the sidelines.

But it was trusty veteran Darius Defoe who hauled his team back into contention with six quick third period points.

And it was Murray who stopped the clock three minutes after the restart as a Corey Johnson triple reduced the deficit to three points.

Back-to-back Person Jr baskets from beyond the arc tied an increasingly thrilling cross-border clash before a buzzer beating Louis Sayers fadeaway two opened up a 78-75 Newcastle lead with 10 minutes to play.

Glasgow refused to go away as the visitors somehow maintained their accuracy and intensity during a fiery fourth quarter.

A series of lead changes kept the full house guessing but there was still nothing to choose between two fully committed sides when Gordon sank the second of two free throws to tie the contest at 95-95 with 42 seconds on the clock.

Defoe picked up a mighty rebound after Johnson missed the chance to fire Rocks back in front and with three seconds remaining Fletcher aced a nerveless two-pointer.

With the Vertu Motors Arena bouncing, Johnson lined up a game-winning triple to break homecout hearts…but a brave shot rimmed out as the final buzzer set the seal on a BBL thriller.