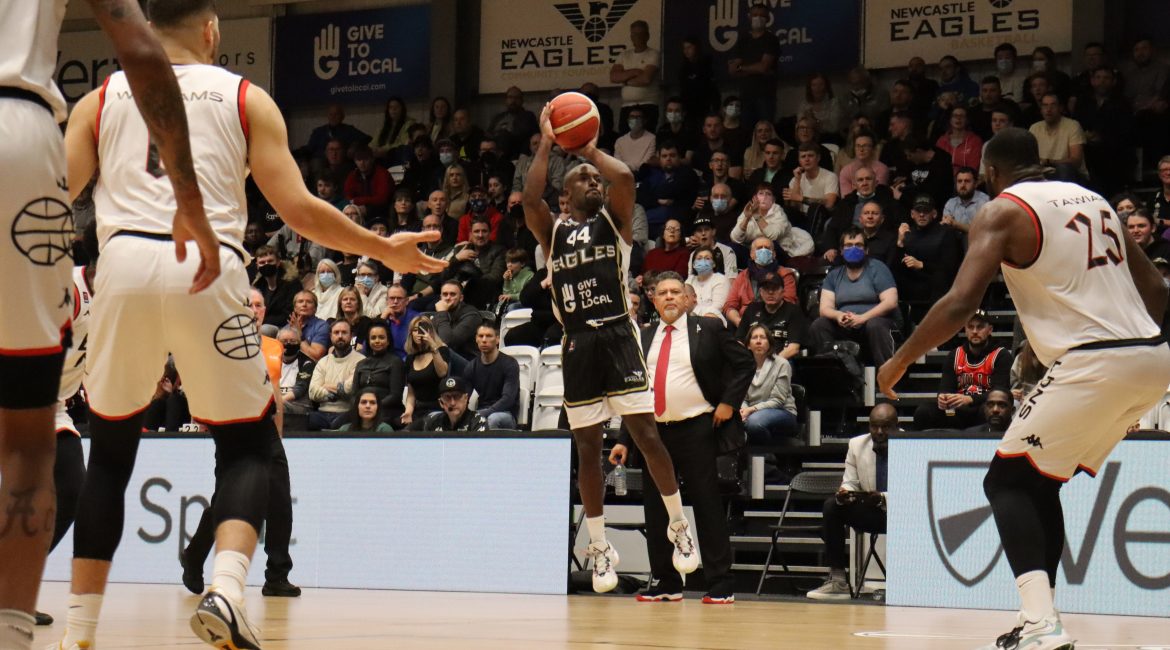 Rahmon Fletcher ripped up the form book and rolled back the years as Newcastle Eagles finally kickstarted their season with a 12-point demolition of London Lions.

The unstoppable guard added 17 assists and four steals to his game-high 25 points on a night to remember for the Kansas City native.

And the savaged Lions limped back down the M1 with their tails between their legs following an incredible night of BBL basketball in front of the Sky Sports cameras.

The last time the two teams met, Newcastle and London served up a classic clash in a defence-first BBL Playoff final.

Despite trailing by 12 points in the third quarter, coach Ian MacLeod’s men bounced back in bullish style to claim a thrilling 68-66 win in May.

And the vanquished Lions headed to Tyneside with revenge in mind.

But finding a way to beat Newcastle is only a small part of the bigger picture for an organisation with lofty goals.

November Coach of the Month Vince Macaulay is under even greater pressure to dominate British basketball this season given the moneybags backing of the franchise’s ambitious owners.

Indeed, London’s aspirations extend far beyond domestic hoops and, prior to tip-off, the visitors may well have had one eye on next Wednesday’s glamour trip to Turkey.

That FIBA Europe Cup clash against Bahcesehir Koleji could yet feature Toronto Raptor Sam Dekker — illustrating the size of the Lions’ task and the quality of their continental rivals this season.

But the capital club’s impressive European progress so far only served to underline the enormity of the challenge facing the Eagles last night.

Newcastle had to face star-studded opposition and their own demons seven days after a humbling homecourt defeat at the hands of old foes Sheffield Sharks.

According to a brutally honest MacLeod that tepid performance lacked intent and defensive focus. Both — and more — would be required to send London packing.

If the Eagles’ defence took a while to click there was no lack of fight or passion from the men in black.

And although the Lions opened up a 15-7 lead, Newcastle were playing with a sense of purpose and passion missing for long periods of a troubled season.

Not surprisingly, given their renewed intensity, the hosts battled their way back into contention with Louis Sayers making a key contribution from the bench.

The second-season Eagle was finding plenty of room on the wings and back-to-back buckets — either side of a Macaulay time-out — reduced the deficit to two points after a thrilling first period.

Quarter two quickly became the ‘Fletcher Show’ as the two-time BBL MVP reminded the Sky Sports audience of his impeccable credentials as a big-game player.

Newcastle’s number 44 loves nothing more than a chance to showcase his unique skillset against one of his biggest admirers.

And a forlorn Macaulay must have wondered how he failed to land Fletcher again this summer as the US playmaker headed to the locker room with a half-time double double of 12 points and 10 assists.

The Eagles led 51-47 heading into the third quarter with the hosts shooting 62 per cent from the floor.

Sayers and Defoe were perfect from open play as Newcastle’s bench contributed 24 first half points.

And that much-needed injection of defensive intensity had forced the visitors into 12 turnovers — resulting in 15 points for MacLeod’s men.

No wonder a raucous Vertu Motors Arena was on its feet as Fletcher sank the final basket of the half against the faltering title favourites.

But the big question remained: could the Eagles maintain their explosive form for a full 40 minutes? Yes they could!

With London big man Chris Tawiah picking up a third foul, after flattening Duke Shelton in the second period, the home side sensed an opportunity and led by 10.

But the Lions weren’t about to lie down and die just yet as Isiah Reese hauled his side back into contention in the closing stages of another riveting quarter.

It was Reese who sparked fury in the VMA stands as a petulant push on Defoe drew the wrath of the home support…and sent the BBL’s most successful player to the bonus stripe.

Defoe might have missed one of his two free throws but the classy Eagles kept their cool to inflict a landmark defeat on shattered London.