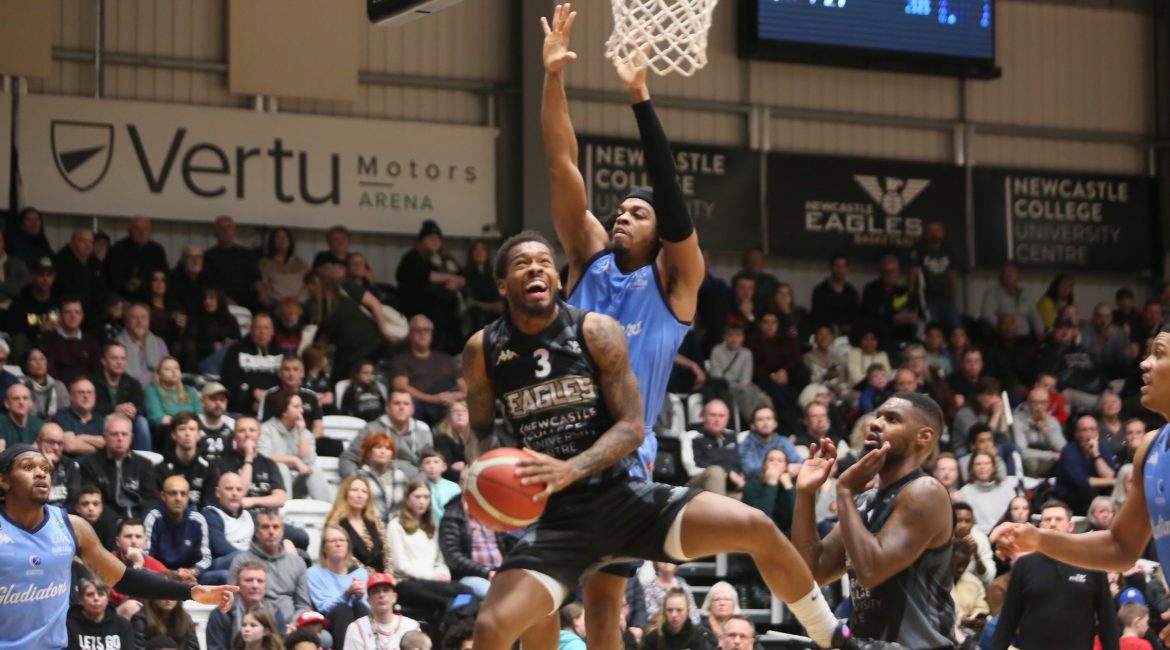 But if all the talk was of another stellar display from the BBL’s breakout performer then there was more to this vital victory than a 34-point Hamlet highlights reel.

Full highlights of Eagles vs Gladiators:

And with Ben Mockford waiting in the wings, Marc Steutel’s men head to Rahmon Fletcher’s Manchester on Sunday increasingly confident of reeling in the eighth-placed Giants.

Three of the BBL’s top nine scorers started a hotly anticipated cross-border clash as the hosts sought to build on a big win at basement club Surrey.

But it was league leader Hamlet who outshone Gladiators pair David Sloan (19) and the relentless Jeremiah Bailey (29 points and 10 rebounds) to comfortably eclipse his own 21-point season average.

Had it not been for the Eagles rookie’s 24 first half points — shooting eight from nine from the field — then the visitors would have been out of sight.

And Hamlet’s flawless 15 from 15 from the bonus stripe was a lesson in ice cool finishing under pressure as homecourt fans revelled in one of the most composed free throw shooting displays in recent memory.

Defoe deserved immense credit for coming off the bench to drop 20 points in just 22 minutes after head coach Steutel preferred Hasahn French and Donovan Johnson over the league’s most decorated player from the start.

But Cohn’s 10 rebounds and 10 assists also caught the eye as Newcastle’s new backcourt general warmed up for Sunday’s showdown with Fletcher in style.

A first Eagles win at the Vertu Motors Arena since October was the perfect way to end what has often been an annus horribilis for the BBL’s most successful franchise.

And Steutel must hope that two wins in two games can be the catalyst for a long overdue upturn in fortunes for a roster still searching for a settled identity.

Defoe continues to help shape that identity long after British basketball pundits predicted the veteran forward would hang up his boots.

How Newcastle solve the Defoe question when the club’s longest serving player does finally decide to call it a day remains to be seen.

But for now, Steutel must be counting his lucky stars that a seasoned veteran synonymous with success continues to be the beating heart of a team in transition.

It was Defoe who stopped a sharp Gladiators start in its tracks as he bounded off the bench within three minutes of the first quarter.

And it was the 38-year-old who continued to thwart former adversary Gareth Murray and his Caledonia clan late into another Vertu Motors Arena thriller.

The inside-outside threat of Defoe and Hamlet kept the hosts in contention during a disjointed first half that saw the Scots stretch out to a 54-42 lead.

And it was Newcastle’s new-look mix of youth and experience that continually blunted the Gladiators’ attempt to win another BBL classic down the stretch.

And the welcome return of Denzel Ubiaro after almost a month on the sidelines provided further festive cheer for a capacity homecourt crowd.

If man of the moment Kyle Johnson failed to stretch his recent hot streak on a rare off-night then Newcastle’s ability to close out the win without another big contribution from the club’s serial matchwinner bodes well for the future.

And once French and fellow big man Justin Everett get to grips with the unique demands of the BBL then the Eagles could yet emerge as playoff contenders come the spring.