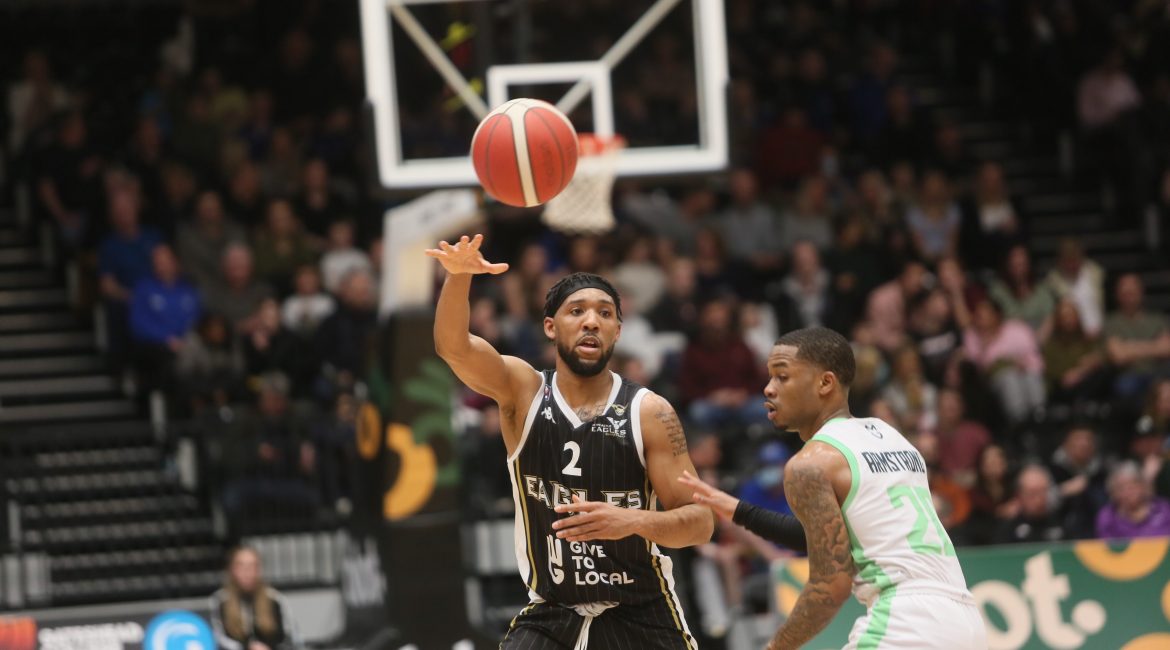 A Rahmon Fletcher double double was not enough to rescue a win for Newcastle Eagles as Manchester Giants avenged January’s overtime defeat on Tyneside.

Newcastle’s skipper added 14 assists to his 10 points despite picking up four fouls before the end of the third quarter.

And six Eagles players hit double figures on a night when offence dominated in front of the Sky Sports cameras.

But the Giants recovered from an 11-point deficit three minutes before half-time to outscore Newcastle 63-40 after the break.

And it was Fletcher’s opposite number Tyrik Armstrong who stole the show as the dynamic guard hit 23 points and dished up 11 assists to lay the foundations for a deserved win.

The US guard followed up January’s 40-point haul at the Vertu Motors Arena with another assured display to see his side home down the stretch.

And Ian MacLeod’s men could have no complaints on the final buzzer after conceding more than a century of points to Manchester for the third time this season.

Newcastle left it late when the two teams squared up seven weeks ago, pinching a BBL thriller in the dying stages of overtime.

But there was to be no repeat of that thrilling victory as the Giants out thought and out fought the fast-fading Eagles during a second half to forget.

Initially the hosts responded well to defeat against Plymouth seven days earlier as MacLeod’s men had the better of a hugely entertaining first quarter.

With no Dan Clark to contend with, Darius Defoe saw an opportunity to dominate in the paint and the BBL’s most decorated player raced to eight points in just seven minutes.

The veteran forward rolled back the years and the Eagles led by nine as Defoe drained the fourth of four two-point attempts.

But in a sign of things to come Manchester were enjoying plenty of success of their own with Armstrong and David Ulph making early inroads for the visitors.

Newcastle led 34-29 heading into the second quarter and the hosts hit the first six points of the period to exert a degree of control.

But Justin Gordon picked up two potentially costly fouls before the break and the Giants capitalised to reduce the deficit to just two points at the half on the back of an impressive 11-2 tear.

Encouragingly, the Eagles had converted four from five from three-point range during that first period points bonanza.

But MacLeod’s men missed all six of their attempts from beyond the arc during a frustrating second quarter.

And although the hosts headed into the second half bossing the boards — Newcastle winning the rebound contest 22-12 without Clark to contend with — curbing Manchester’s 59% shooting from the floor was the priority.

Prior to the break there had been little to separate Fletcher and Armstrong in the battle for backcourt supremacy.

Both players headed to the locker room on eight points, while the Eagles’ skipper had six assists to his rival’s five.

And home fans headed towards the concourse knowing either guard exploding after the break could turn a tight affair on its head.

Ultimately, it was Armstrong who stole the show with an increasingly frustrated Fletcher picking up his fourth foul 15 seconds before the end of a sobering third quarter.

Newcastle were outscored 32-19 during a disastrous period that allowed the Giants to open up an 11-point lead heading into the final stanza.

And although Fletcher managed to stay out of trouble during the closing stages there was no fairytale comeback for the hosts.

Manchester’s win lifted Gardner’s side four points clear of the Eagles in the BBL Championship table.

And with nine regular season games remaining, the eighth-placed men in black still have it all to do to secure a top four finish heading into the playoffs.