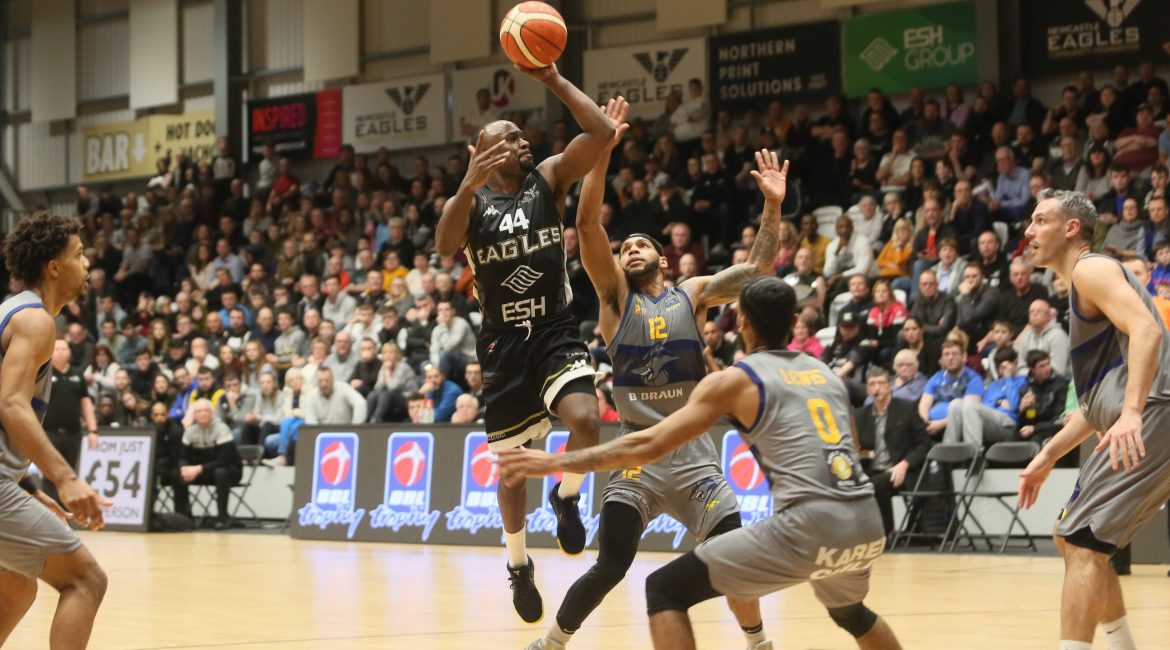 On a night when nothing less than a Newcastle Eagles win would placate an increasingly restless fanbase this felt like the old order restored.

For more than a decade the hardiest of Sheffield Sharks’ long-suffering supporters made the trip up the M1 expecting nothing more than a sound beating at the hands of the merciless men in black.

And, more often than not, they got exactly that.

But in the last 12 months the tide has turned. A storm of criticism has come Newcastle’s way. And a cloud hung over a club struggling to recapture former glories.

So much so that Sheffield headed into this BBL Trophy quarter-final clash on the back of three successive wins against the Eagles this season.

And that the South Yorkshiremen arrived on Tyneside as hot favourites said it all about the hosts’ wholly unconvincing recent home form.

Ultimately a captain’s performance of 29 points and nine assists from Rahmon Fletcher put the visitors firmly in their place.

But big numbers from Mike Morsell and CJ Gettys, coupled with a key contribution from a bullish bench, underpinned a victory that tasted sweeter than most.

And Newcastle can now look forward to a semi-final against Cheshire and a chance to exorcise more demons against a Phoenix side who dominated at the Eagles Community Arena seven days earlier.

Of the four key players facing a late fitness test only Drew Lasker failed to suit up with an ankle injury ruling out the in-form veteran.

Darius Defoe was made available alongside the returning Morsell and Sade Aded Hussein.

And suddenly the Eagles looked in far better shape to bury their Sheffield hoodoo and progress to the BBL Trophy’s final four.

But the club’s cruel injury jinx struck again within the first four minutes as Eddie Matthew, retaining his place in the starting five, limped out of the action.

The Morpeth guard’s game was over but Newcastle rallied – six points and four rebounds from Gettys laying the foundation for a 23-17 lead.

The in-form big man followed Matthew off the court with 65 seconds of the first period to play following a heavy fall over the back of Sharks’ Bennet Koch.

And interim head coach Ian MacLeod required a fresh body count during the quarter break with two more names added to the list of the hosts’ walking wounded.

Encouragingly for the Eagles’ playcaller, benchmen Nick Schlitzer and Kai Williams had both found their range from beyond the arc heading into the second period.

And on a night when every player in a Newcastle vest would need to be at their all-round best, the experienced duo’s early contribution would be crucial.

Sharks trailed by 12 midway through the second quarter and Gettys’ reintroduction gave a noisy ECA crowd more reason for optimism.

But MacLeod was forced to call a timeout three minutes from half-time as Sheffield trimmed the deficit to seven on the back of a Connor Cashaw triple.

It was the right tactic at the right time as the hosts re-emerged refocused and reinvigorated.

Newcastle had bossed the battle of the boards to out-rebound Atiba Lyons’ men 28-13 in the first 20 minutes.

And more of the same would surely break Sheffield’s stranglehold over the Eagles this season.

But the Sharks have learnt how to beat Newcastle again and again and a late run towards the fourth period set home nerves jangling.

A fourth foul for all-action Morsell – the American called for a dubious technical with 70 seconds remaining in the third – stung the home side.

And the Eagles’ lead was cut to four as the quarter buzzer sounded.

The two teams were tied at 63-63 before Newcastle launched a thrilling 12-0 tear – playing some of their smartest basketball of the season in the process.

Fletcher and Morsell sparked the truly brilliant burst that sent Sheffield packing. But this was a night when a team under intense scrutiny pulled together in extraordinary circumstances.