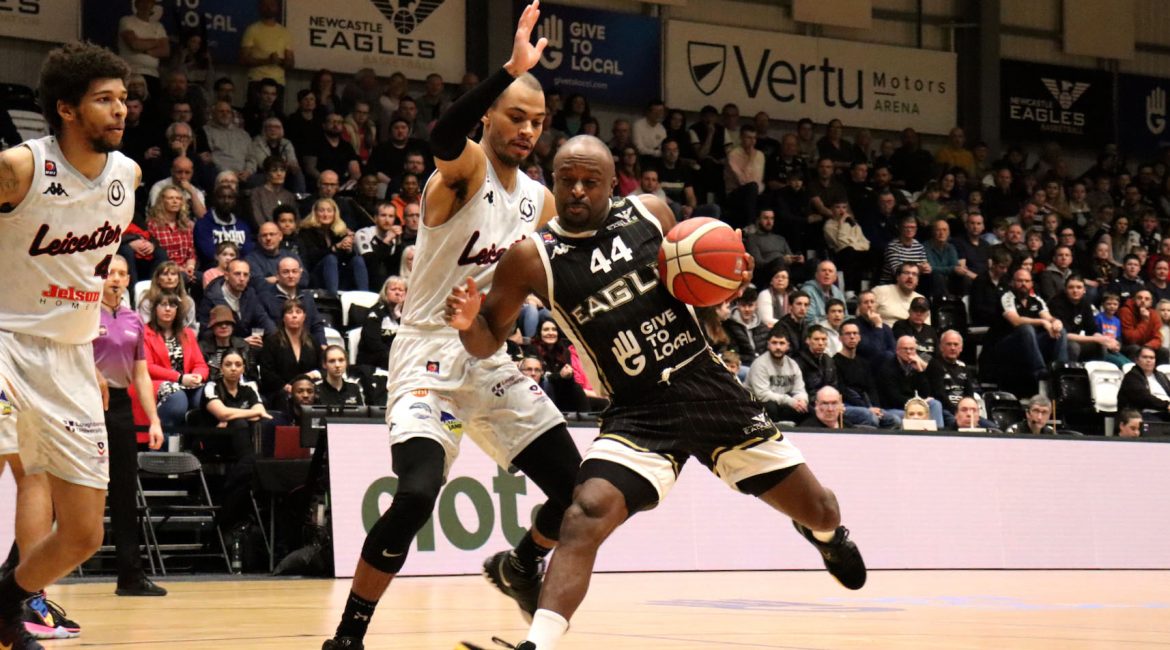 Leicester Riders won on Tyneside but were forced to wait to lift the league title after a London Lions victory against Bristol Flyers kept this season’s Championship race alive.

Rob Paternostro’s men took control midway through the first period to lay the foundation for an impressive victory in front of the Sky Sports cameras.

And ultimately a Newcastle Eagles’ side lacking strength in depth, confidence and form simply couldn’t stay with one of the most complete BBL rosters in recent memory.

Paternostro’s masterful champions elect underlined the gulf in quality between the runaway league leaders and an Eagles side blighted by injury, illness and bad luck all season.

And a ruthless show of aggression — with six visiting players hitting double figures — proved too much for a team fighting to stay in the playoff picture.

Newcastle, of course, are well practiced when it comes to playing in key fixtures that could determine the destination of the BBL’s biggest prizes.

But historically it’s the Eagles chasing down another top prize at the business end of the season.

Not that Newcastle were ever going to gift victory to the Riders — who needed to win on Tyneside and hope Bristol beat London in order to lift the league title.

In fact, Ian MacLeod’s men went into a traditionally eye-catching fixture with one thing in mind: to arrest the damaging four-game losing streak threatening the club’s top eight target.

Just 48 hours after an energy-sapping loss at the Lions and without key man Wesley Person Jr, the odds were stacked against a first win in five.

And if ever the Eagles needed a backs-to-the-wall victory to boost morale and mix things up in mid table then last night was the time.

In the BBL’s most successful player, Newcastle boast a warrior always willing to put his body on the line in a black and white shirt whatever the situation.

Darius Defoe passed 6,000 points at the Copper Box Arena on Wednesday and the Eagles’ longest serving player was presented with a commemorative vest by the club’s managing director Paul Blake prior to tip-off.

But with a 28th medal appearing increasingly out of reach, the 37-year-old forward locked in on Leicester playing for pride…and with one eye on ex-Eagle Shawn Myers’ 6,033 points tally.

Defoe might have missed his first three attempts in the face of some stifling defence but trademark back-to-back twos fired the hosts 14-12 in front.

Disappointingly, that was as good as it got for the remainder of the first period as Paternostro’s men stepped things up and turned on the style.

The visitors looked every inch the de facto champions as the Riders ran riot behind a stunning 16-0 run.

And with three seconds remaining until the quarter break things suddenly got worse for the retreating hosts — a frustrated Justin Gordon picking up his second foul of the game after seeing an ugly shot rejected.

Leicester led by as many as 23 points midway through the second period with the nimble Kimbal Mackenzie coming off the bench to bag 10 terrific first half points.

But Newcastle hit back towards the end of another free-scoring half at the Vertu Motors Arena as Rahmon Fletcher found his range from beyond the arc and Gordon came back into the game.

The battling Eagles took the second quarter 31-30 but Leicester, shooting a phenomenal 71 per cent from the floor and with nine different scorers, were on fire at the offensive end.

And with London losing at the half at home to the Flyers, the visitors had one hand on yet another Championship title. That the Lions later rallied to beat Bristol only delayed the inevitable.

Riders’ relentless pursuit of points continued after the restart with 2021 league MVP Geno Crandall sensing the opportunity to put on yet another BBL masterclass.

During a dazzling third quarter the talented all-rounder moved to within two rebounds of a triple double as he added eight boards and 10 assists to his 12 points.

And Newcastle had no answer to the peerless playmaker as Leicester opened up an eye-watering 84-58 lead with 10 minutes on the clock.

That Crandall sat out the entire fourth quarter was scant consolation to an Eagles side that finished the night in ninth place after Glasgow’s win against Surrey.

And with BBL Trophy winners Cheshire Phoenix on Tyneside next Friday things don’t get any easier for MacLeod’s roster.