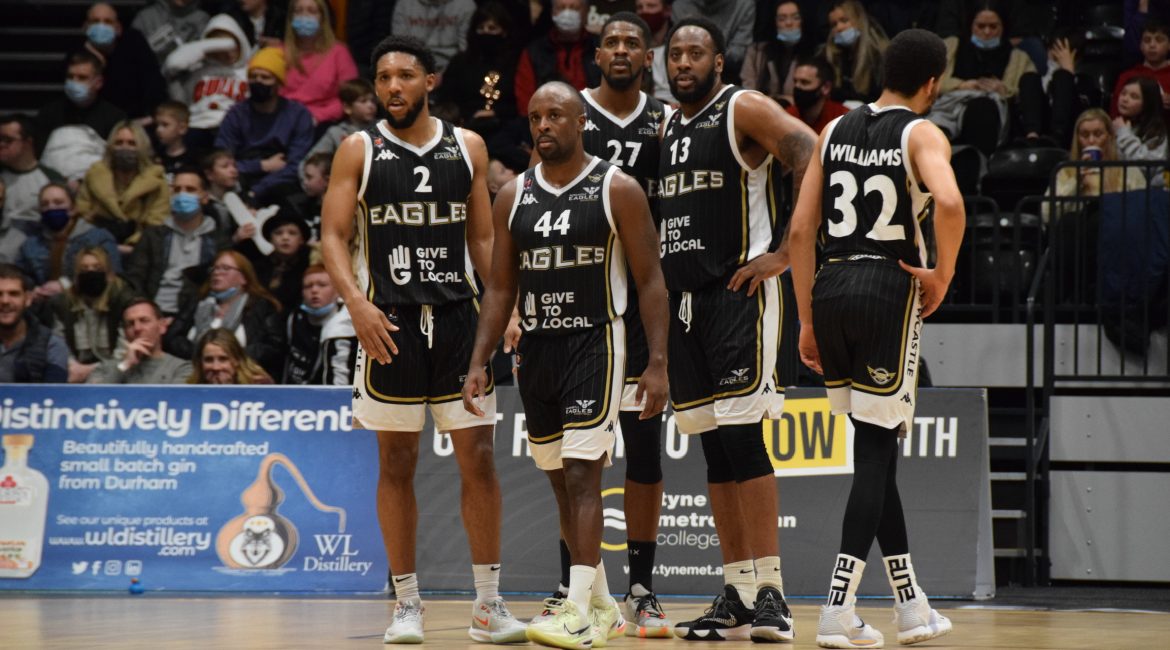 According to mid-season recruit Brandon Peel, Newcastle Eagles’ players ‘watched a lot of film’ during the festive period.

But there was no time to settle down and enjoy Home Alone, Elf or It’s A Wonderful Life while pulling crackers and tucking into turkey.

Instead, Ian MacLeod’s men were told to sit through a series of painful screenings of their own nightmare before Christmas — a crushing 101-72 loss at Leicester live on Sky Sports.

Rather like the umpteenth repeat of Love Actually, it must have made for uncomfortable viewing.

But if MacLeod’s masterplan was to inspire his roster to produce a suitably pugnacious response against Cheshire then it almost worked a treat. Almost.

And if a flawed first half made for another video nasty then a blockbuster finale was worthy of the greatest Hollywood epic.

But it’s increasingly clear that the wildly inconsistent Eagles still have much work to do if the league’s most successful franchise is to double down on its dynasty in 2022.

It had taken 55 minutes of BBL basketball to separate the two teams on December 5 before Newcastle finally closed out a triple-overtime thriller.

If facing a fired-up Phoenix would prove difficult enough for Newcastle then the absence of two high-energy players made the hosts’ task even tougher.

Daniel Johnson-Thompson is out for the season after suffering a knee injury at Cheshire earlier this month.

And Corey Johnson failed to recover from a bout of Covid in time to take his place on court last night — posting a positive test on his seventh day of isolation.

Louis Sayers limping off four minutes before half-time hardly helped matters and, in the circumstances, the Phoenix must have sensed this was the perfect opportunity to avenge that heartbreaking loss just three weeks earlier.

A stunning start from Cheshire proved the visitors were in no mood to let slip another two points on the road.

Larry Austin paced Phoenix from the tip as he plundered eight first-period points — combining cute half court pressure with a flurry of decisive fast-break finishes.

But the busy guard found plenty of support from Namon Wright and Noah Dickerson as the visitors flooded the Eagles’ paint.

A clearly concerned MacLeod and on-court general Rahmon Fletcher took every available opportunity to talk things through as nervy Newcastle went 10-0 and 22-7 down.

And yet despite those hurried conversations — and the hours spent analysing a crushing defeat at the hands of Leicester — the hosts appeared to have learnt little from dispiriting losses against the Riders and Bristol Flyers.

Familiar failings were costing the Eagles dearly as the BBL’s third-bottom club opened up a convincing 29-16 first quarter lead.

And although Newcastle did do a better job of containing Cheshire’s offence during a low-scoring second period there was little to cheer at the other end.

Restricted to a paltry nine points in 10 minutes, it was difficult to recall a more lacklustre period from the men in black.

And had it not been for seven points off the bench from pocket rocket Kyle Williams then the visitors might have been out of sight.

But this was a game that captured Newcastle’s mixed season in a nutshell: long spells of hesitant ball movement giving way to bursts of brilliant attacking basketball.

For the Eagles this was the archetypal game of two halves as MacLeod’s men finally found their way in the last 15 minutes.

And Newcastle looked more like the side that triumphed over London Lions and bested the Phoenix on their own patch as they outscored their rivals 49-36 in the second half.

Okereafor was forced to raise his game after the restart as the Eagles finally ate away at Cheshire’s commanding lead.

Fletcher hit his first points of the night to spark an 8-0 tear as Newcastle won the third quarter 20-15 before cutting the deficit to just four points with five minutes to play.

Wesley Person Jr had suddenly found his range from beyond the arc and Duke Shelton surged towards a customary double double despite an atypically slow start.

Under increasing pressure Dickerson, closely followed by Mike Ochereobia, picked up a fifth foul down the stretch as Phoenix struggled to maintain their discipline.

And that man Williams fired the Eagles into their first lead of the night with three minutes on the clock…only for the Phoenix to rise from the flames and sentence Newcastle to a third defeat on the bounce.