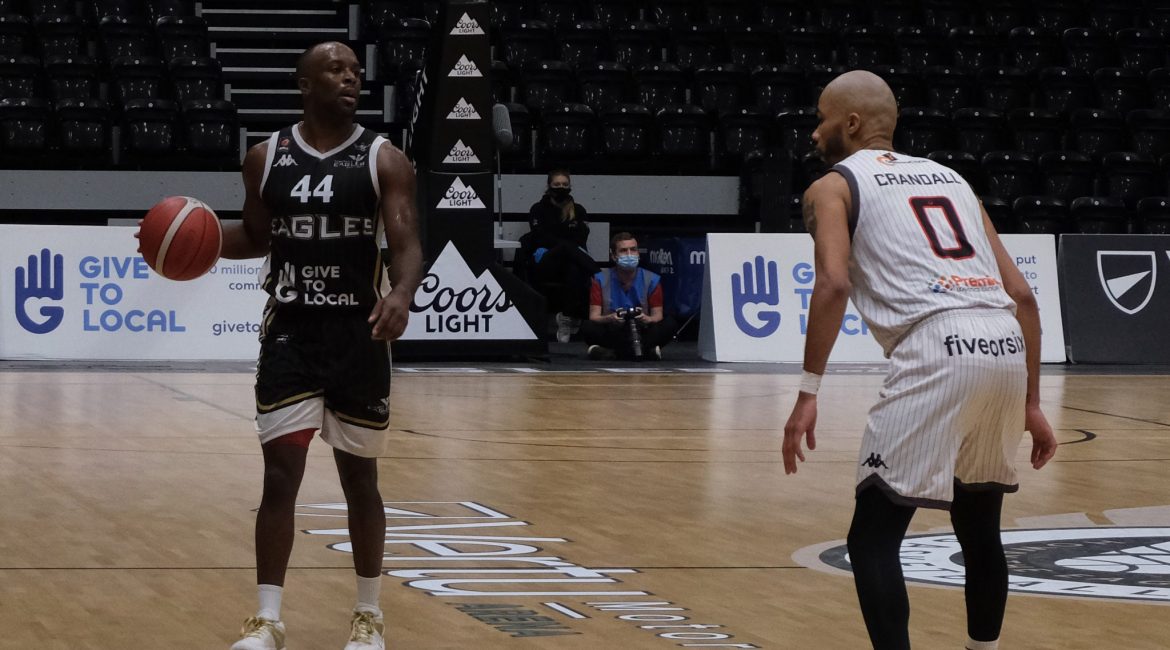 Newcastle Eagles’ title hopes lie in tatters following a sobering loss at the hands of a Leicester Riders side with one hand on this season’s Championship trophy.

But it will take some serious soul-searching and a much-needed change in mindset if nervy Newcastle are to steady the ship in the face of a crushing homecourt reverse.

As the Eagles slipped to 12-7 in the league, Leicester went 15-3 to reinforce their position at the top of the table.

And those Newcastle fans hoping for a classic contest between Rahmon Fletcher and Geno Crandall were left sorely disappointed as the former’s trademark double double mattered little in the context of a dire defeat.

In the eyes of many, this season’s bid to become the 2020/21 BBL MVP is already a two-horse race.

And the joint favourites went head-to-head at the newly renamed Vertu Motors Arena determined to keep their respective necks in front.

Thoroughbred guard Fletcher is already a two-time BBL MVP and few would have betted against a hat-trick of titles prior to last night’s result.

Leading the league with a phenomenal 9.4 assists per game and one of four players averaging more than 17 points, the Newcastle star is on fire.

But young buck Crandall has been snapping at Fletcher’s heels all season and the BBL rookie has been the breakout star of Leicester’s impressive campaign.

Who would emerge victorious in the battle of the backcourt was just one of the fascinating subplots underpinning a fifth meeting of the season between two of the league’s fiercest rivals.

Another pre-tip talking point was the welcome return of Eagles forward Justin Gordon following a four-week absence with an ankle injury.

There’s no doubt Newcastle have struggled to adjust to the all-action American’s spell on the sidelines — losing four of their seven matches in his absence.

But a typically explosive finish from a Fletcher-induced alley-oop in the third minute allayed any lingering doubts about Gordon’s match fitness.

Disappointingly, that was about as good as it got for the out-of-sorts hosts.

And the early deficit stung Rob Paternostro’s men into launching the unforgiving 14-2 tear that opened up an impressive 20-11 lead.

Worse was to follow for MacLeod’s men as Fletcher was poked in the eye by a backtracking Conner Washington.

That painful blow sidelined the Eagles’ talismanic leader until three minutes into the second quarter — by which time Newcastle trailed 40-27.

Not for the first time this season the home side looked weak under the glass and vulnerable to the brand of rapid transition offence MacLeod had all but patented as his own earlier this season.

Gordon’s return couldn’t prevent Riders from bossing the boards and the visitors, with Darien Nelson-Henry and William Lee to the fore, outrebounded the Eagles 22-17 in the opening 20 minutes.

Leicester had capitalised on a series of good looks to make their chances count and 57% shooting from the floor was enough to open up a 51-40 half-time lead.

Newcastle’s title hopes were on the line heading into a pivotal third period but try as they might the home side just couldn’t raise their game against an increasingly assured Riders.

An arcing Crandall triple fired Leicester 66-53 ahead before the visitors hit seven points in the final 70 seconds of the quarter to open up a commanding 20-point lead.

Paternostro had seven players in double figures heading down the stretch on a night when Riders’ total team basketball kept the Eagles on the back foot.

As the visitors calmly moved through the gears during a comfortable final quarter Newcastle, by contrast, lacked cohesion, clarity and, most alarmingly of all, confidence.

And the Eagles’ heaviest home defeat at the hands of their bitter rivals will have hurt everyone associated with this proudest of franchises.