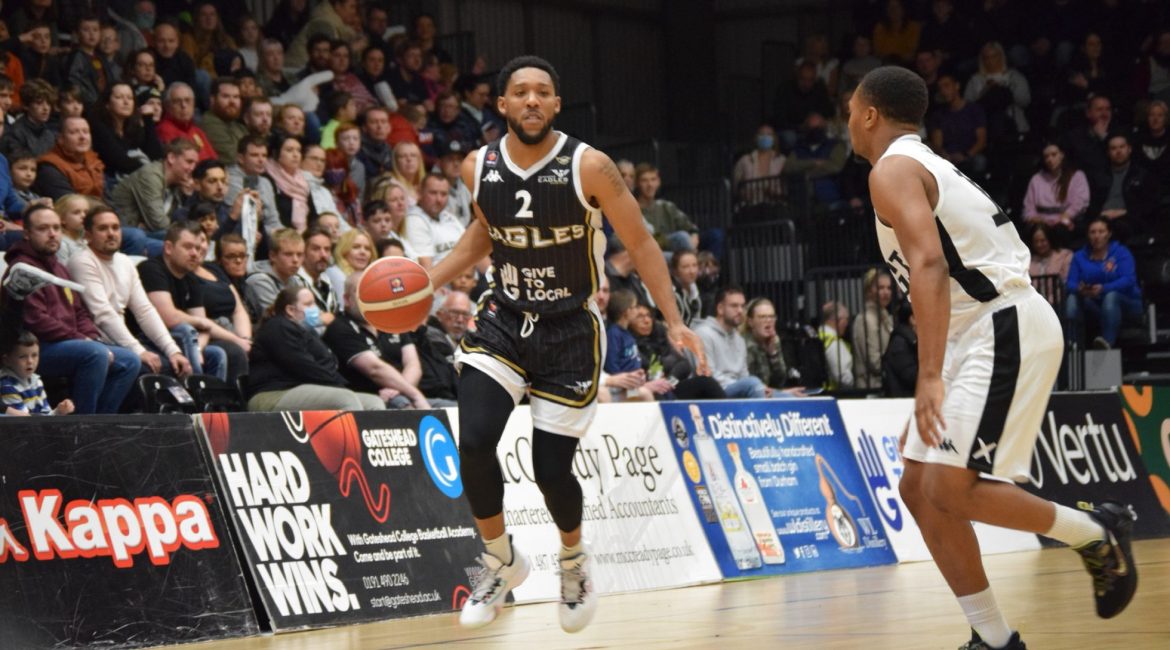 Newcastle finally relinquished their increasingly flimsy grip on the BBL Cup last night as an illness and injury-ravaged Eagles slipped to a sixth defeat of the season.

The 2021 winners head to Cheshire Phoenix tomorrow with nothing more than pride to play for as a North Group dead rubber signals the end of a cup campaign to forget.

But head coach Ian MacLeod took the opportunity to blood some exciting new faces and hand more key minutes to the next generation of Newcastle stars.

And a boisterous crowd lapped up another backs-to-the-wall display from the depleted men in black on a night when the Eagles might have been losers…but North East basketball was the winner.

MacLeod, back alongside lead assistant Jack Burgess, flooded his bench with Academy talent in a bid to ease the pressure on his senior stars.

But spare a thought for poor Freddy Kepngang who suited up for the first time at the Vertu Motors Arena wearing Rahmon Fletcher’s number 44 shirt. No pressure there, then.

If Newcastle knew they had to win — and hope the Rocks defeated Phoenix north of the border — to keep their BBL Cup hopes alive for another 48 hours then the flipside was that this was a virtual freebie of a fixture.

Few of the fans making up the Eagles’ first capacity crowd of the season could have expected MacLeod’s makeshift roster to compete with a stacked Giants side.

And as outright underdogs the hosts could throw off the shackles, go for broke and see where the chips would fall.

But Manchester have looked mightily impressive during their rapid ascent to the top of the BBL Cup North Group table.

And the Giants arrived on Tyneside chasing the sixth win of the season that would guarantee top spot and a favourable quarter-final draw.

As expected, the visitors gained an immediate stranglehold and, once in control, Lloyd Gardner’s men simply never eased off.

Dan Clark, back at the Vertu Motors Arena for the first time since Great Britain’s historic Eurobasket win against Germany in February 2020, did his best to even things up with a flurry of first half fouls.

But even the veteran centre’s failure to keep his cool during a dramatic six-minute spell couldn’t help Newcastle find a way back into a fixture they trailed by 19 points at the half.

Beyond the scoreline, there were positives. And plenty of them.

And Terrell Vinson, who has often flattered to deceive during a frustrating start to his time on Tyneside, battled his way towards nine points and seven boards before the break.

Wesley Person Jr and Corey Johnson were a constant threat on offence but Gardner had done his homework following the Eagles’ narrow defeat north of the border.

Neither of Newcastle’s three-point specialists were allowed any time or space beyond the perimeter as the Giants got in the faces of Newcastle’s in-form guards.

But both Person Jr and Johnson stuck to their task to combine for 21 hard-earned first half points.

Perhaps the biggest positive of all was the sight of the real Rahmon Fletcher — rather than temporary stand-in Kepngang — encouraging his team-mates from the sidelines.

A week after injuring his leg at Sheffield, the two-time BBL MVP appeared to be moving well and pain-free ahead of a potential return to action at Leicester Riders next Friday.

Interestingly, Clark returned to the fray at the outset of the third period when it seemed certain Gardner would protect his star man from a fifth foul and an ignominious exit.

Sebastian Sloan, Leo Leperrier and Fletcher MkII — Kepngang — all followed their Academy team-mates onto court and if the present looks a little troubling for the under-strength Eagles, then the future appears full of hope.