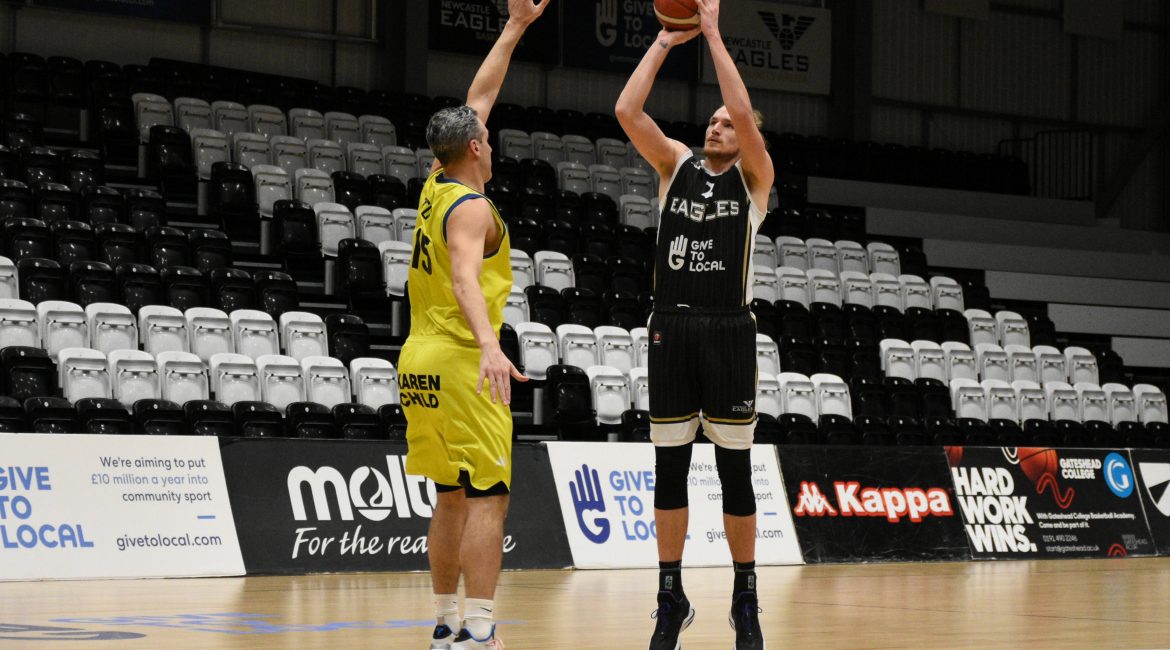 Nothing beats one of the biggest and best rivalries in British basketball.

Newcastle and Sheffield have been involved in some humdingers over the years.

Overtime, double overtime and even triple overtime has been required to separate two fierce opponents in the past.

And wherever the Eagles and the Sharks have been sat in the Championship table, this tasty fixture rarely fails to disappoint.

This was the instantly forgettable exception to the rule.

Prior to last night’s tip-off Newcastle held the initiative this season.

But form frequently counts for little in this battle of the northern heavyweights and the Sharks always head to Tyneside with a prized scalp in their sights.

That the Eagles took a seven-game winning streak into the first of two matches inside 72 hours won’t have worried Atiba Lyons’ men.

And after Evan Maxwell fired Newcastle into a 4-0 lead inside the first 50 seconds it was the visitors who went on to dominate the first quarter…and the game.

Committed transition defence knocked the Eagles out of their stride early on and the BBL Cup winners simply never recovered.

The Sharks were the busier of the two teams under the glass, smarter in terms of their shot selection and first to every loose ball.

Not since a first half to forget against London on January 8 had Ian MacLeod’s men looked quite so lacklustre.

And tomorrow’s trip to Bristol suddenly looks like the toughest of asks for a side brought back down to earth with a bang.

When MacLeod called a time out after just seven-and-a-half minutes it wasn’t a second too soon. But who knew it was already too late?

The Eagles were trailing 20-12 and sorely lacking the intent and intensity at the heart of that spectacular seven-game winning streak.

After the previous Friday’s horror show at least Maxwell was enjoying a better night in black and white.

But even his nine first period points didn’t overly concern a Sheffield side comfortably in control.

And the Sharks fully deserved their 24-14 lead heading into the second quarter.

Newcastle did pick things up after the restart but MacLeod was forced to call an early timeout in order to spark a delayed response.

The Eagles’ head coach demanded a back-to-basics approach from his underwhelming side and called for better policing of the defensive glass.

Both were needed as the hosts sought to trim the deficit and stay in touch at the half.

Still, Sheffield led by seven after 20 impressive minutes and things swiftly got worse for the out-of-sorts hosts.

Needing to open the second half with a bang, Newcastle managed no more than a whimper.

Multiple turnovers, a Rahmon Fletcher technical and Justin Gordon’s third foul of the night capped the worst possible start to the third quarter.

And if an Eddie Matthew three-point play offered a glimmer of hope then a spectacular Antwon Lillard dunk, followed seconds later by a Darius Defoe offensive foul, better reflected a miserable night for the Eagles.

The Sharks led 62-42 with 10 minutes to play and suddenly those four defeats to Newcastle on the bounce seemed like a dim and distant memory.

Gordon picked up a fourth foul — and subsequent technical — to leave the game eight-and-half minutes early.

And the American’s paltry return of five points and one rebound summed up a frustrating 15 minutes for the normally reliable rookie.

But Gordon wasn’t alone. No Eagles player can look back on a horrible loss with anything but deep embarrassment.