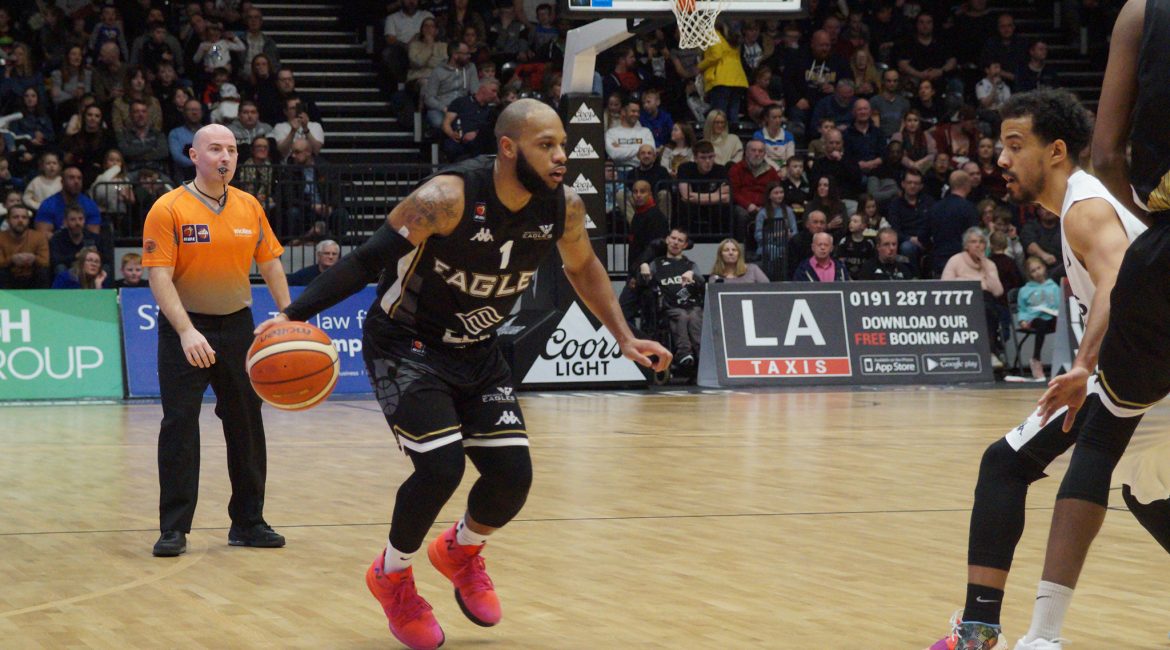 The last time Rodney Glasgow Jr suited up for Newcastle Eagles there were still three teams fighting it out for the Premier League title.

Boris Johnson was still battling to take the UK out of Europe as leader of a Conservative party clinging to power.

The final instalment of the Star Wars saga was still two months away.

And the clocks hadn’t even gone back to mark the end of British Summertime.

To say Glasgow Jr’s Eagles career has been fraught with frustration is an understatement.

And Glasgow Jr had every right to enjoy the moment as Newcastle bagged their most convincing win of the season in front of a raucous capacity crowd.

Arriving in England last summer, the American had been told he could expect to be issued with a British Virgin Islands passport within weeks.

That would, in turn, clear the way to apply for a full British passport and allow Glasgow Jr to represent Newcastle without the requirement for a work permit.

But the weeks turned to months and with team-mates dropping like flies, the fully fit playmaker was forced to watch on from the sidelines – save for a brief three-game run in the BBL Cup when he replaced the injured Mike Morsell.

The last of those matches was on October 18 when the Eagles threw away a commanding lead to slip to a three-point defeat against Sheffield Sharks.

As long-awaited returns go this was lengthier than most.

And the sense of relief was palpable as Glasgow Jr stepped on court with three-and-a-half minutes of the first period remaining to finally resume his Newcastle career.

His first contribution was a cute reverse pass to Darius Defoe but moments later the 27-year-old announced his comeback in style.

Picking up the ball on the edge of the ‘D’, Glasgow Jr cut through a crowd of Lions to convert under pressure off the glass.

Offensively the hosts were on fire against a London side that kept leading scorer and Love Island star Ovie Soko benched for the first seven minutes.

But typically inconsistent defence meant the visitors managed to stay in touch – trailing 31-24 at the end of a free-scoring first quarter.

If all the pre-tip talk had focused on Glasgow Jr’s return allowing Rahmon Fletcher to rest his tired legs then the Eagles were most effective with both left handers in tandem.

It was the latter who lit up the Eagles Community Arena midway through the second period on the back of a brilliant coast-to-coast burst and finish.

But with the 7-1 Lions’ pride at stake, the visitors kept coming back.

And there was a collective sigh of relief when CJ Gettys converted on the buzzer to send Newcastle into the locker room 58-53 ahead.

But it wasn’t all going the way of the Eagles’ intimidating centre and two missed free throws kept London keen.

Cue Glasgow’s return to the fray and within seconds of the busy guard bouncing back onto court an arcing three opened up a double-digit lead.

That huge triple sparked the Eagles’ best spell of the night – Defoe finishing under the basket following a fabulous passage of play before MVP Morsell used a combination of pace and power to open up a 77-61 advantage.

Newcastle took an 84-71 lead into the final period and, on a night when almost everything dropped from inside the paint for the red-hot hosts, Ian MacLeod’s men continued to pour in the points.

And a statement win against the best side in the BBL proved to be the perfect preparation for tomorrow’s Trophy semi-final first leg at Cheshire Phoenix.