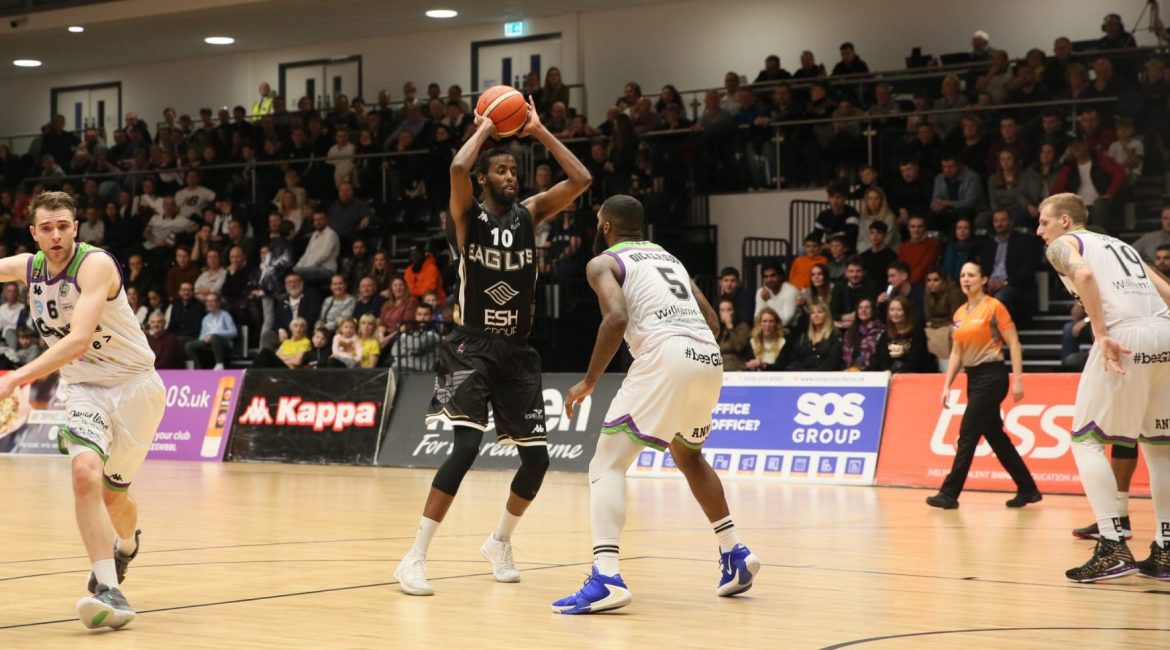 Against the backdrop of John Mitchell’s exit less than 24 hours before tip-off, a dead rubber of a BBL Cup tie had suddenly acquired extra significance.

But if the American rookie’s short-lived stay on Tyneside had dominated the pre-match narrative then a convincing Newcastle Eagles victory dispelled any sense of a roster in crisis.

In fact, a thoroughly professional performance was the very epitome of business as usual – the bullish hosts securing third place in the cup’s North Group and making light of Mitchell’s departure.

Indeed, as a measured response to rumours of unrest, Newcastle couldn’t have scripted it any better.

But within minutes Hussein was – temporarily at least – the last man standing as both Defoe and Morsell picked up early fouls.

Prior to tip off Newcastle’s towering Frenchman had spoken of the need for the hosts to sign off in style ahead of a 35-day break in homecourt action.

And Hussein, who went on to lead all scorers with a mammoth 25 points and 16 rebounds, appeared determined to deliver on his pledge to send the Eagles Community Arena crowd into the Christmas period celebrating a big win.

The mobile centre played all 10 minutes of the first period and made the most of an extended spell on court: Hussein had six points, four rebounds two assists, one block and a tidy steal to show for an outstanding all-round effort.

And suddenly Mitchell didn’t look like much of a miss after all.

The Bronx bruiser’s inside muscle might well have been required against the BBL’s more physical rosters.

But interim head coach MacLeod has myriad options to compensate for the flamboyant forward’s absence.

And he still has veteran Rahmon Fletcher pulling the strings and pulling off the eye-catching plays in the paint.

With three minutes on the clock the classy point guard snaked his way through the massed Manchester defence to drop an outrageous off-balance lay-up.

And that sensational score opened up a seven-point lead for the black and whites against a Giants side looking to star man Del’vin Dickerson to spark a much-needed comeback.

MacLeod had identified the burly forward as a potential threat but Newcastle were locking down the visitors’ most potent scorer with ease.

And Dickerson’s frustration was laid bare midway through the second period as he finally found the space to sink a dunk – roaring in the face of a deadpan Hussein on his way back down.

The Eagles’ top scorer continued to tick over as he chased a double double before the break.

And although Hussein fell two points and one board short of that lofty target as the half-time buzzer sounded, his contribution was key to a 20-point Newcastle lead.

MacLeod’s men had suffocated Manchester throughout a stifling second quarter to outscore the Giants 23-8.

And with 20 minutes to play the Eagles had all but guaranteed third place in the BBL Cup’s North group.

A free-scoring third period was entirely predictable given that this dead rubber was now well and truly buried as a contest.

And Morsell, in particular, sensed an opportunity to score big – the livewire BBL rookie making some sweet moves to the basket in the face of a tiring Giants defence.

Hussein notched his double double before the end of a thrill-a-minute third quarter and went on to pile on the points down the stretch.

An adrenaline-fuelled dunk with less than two minutes remaining took Newcastle’s MVP to 21 points and secured the century for his team.

And on the back of an entertaining rout, Manchester’s return to the North East on December 20 can’t come soon enough.